I’m of the opinion that, after much exposure to their lineup of fire-spitting muscle cars, there’s nobody else in the automotive industry that captures the spirit of classic American steel better than the Italians; specifically, Fiat-Chrysler group. And while the thought of a muscle-bound Jeep Wagoneer probably wouldn’t have been widely accepted back when that truck first debuted in the 1960s, if it had been built, it would have no doubt felt a lot like today’s ballsy Grand Cherokee SRT. 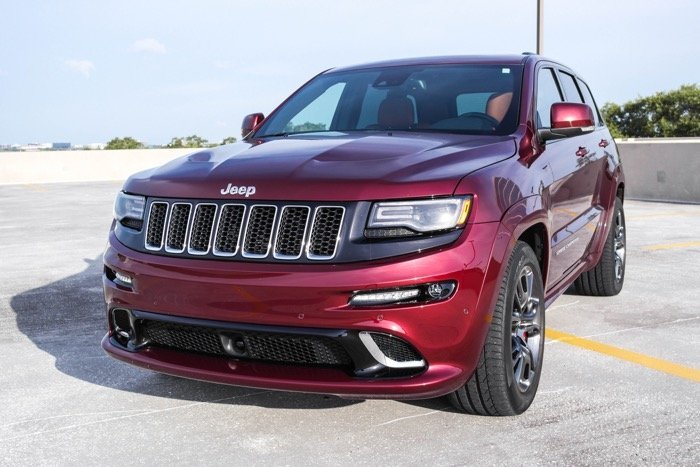 Having had plenty of seat time in 6.4-liter Hemi-equipped SRT Chargers and Challengers, I had a good idea of what to expect when the Grand Cherokee SRT showed up at my door: plenty of torque, very good sounds, quick shifts from the 8-speed ZF automatic, and lousy gas mileage. The Jeep satisfies on all counts, and more, because what I hadn’t accounted for is the way the GC’s character would endear itself to me even more than its Dodge sedan counterparts.

The 6.4-liter Hemi is an experience to behold, not only as an exercise in big-block throttle response but also aural delight. While the overall tone here is subdued compared to the raucous Challenger SRT 392, the rumbly Hemi growl is still unmistakable. Shifts in sport mode are executed with the same whip-crack speed and precision as we’ve come to expect from this ZF-sourced ‘box, and the all-wheel drive system ensures all that power gets to the ground sans drama. Although, a rear-wheel drive only mode for smoky burnouts would be a welcome addition – the most aggressive torque split available (accessible in Track mode) sends 70% of engine torque rearward. 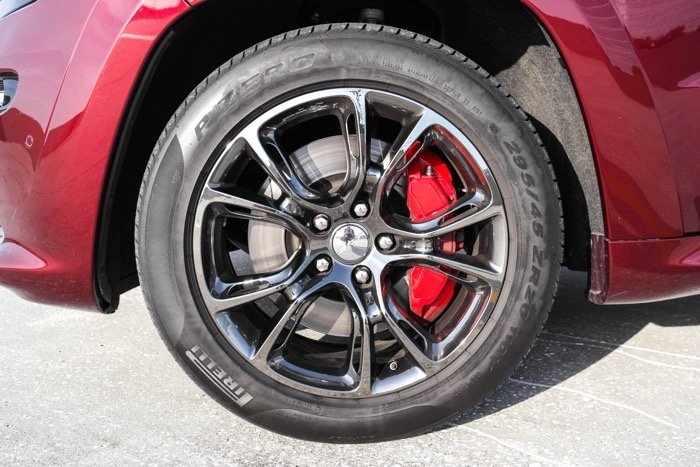 The SRT’s surprising stability under power also comes courtesy of those optional 295-width, 20” Pirelli P-Zero summer tires (or “3-seasons” in Jeep’s marketing-speak). Jeeps usually have a knack for clawing onto all sorts of unusual surfaces, but rarely is one of them pavement – the SRT changes that. While I didn’t attempt to explore this big beast’s limits of grip on public roads – few rational individuals would – it’s easy to surmise that overall adhesion levels are admirably high, not just for an SUV, but for any performance four-door. Jeep quotes a maximum .90 G of lateral acceleration, and it’s easy to believe that claim. Push hard enough, and you’ll likely find gradual, safe understeer – but few owners will ever get to that point on the street. About the only criticism to be leveled at the SRT’s chassis is the somewhat slow, detached steering…not entirely unexpected given the Jeep’s sheer bulk, but it remains the only indication that the SRT is, in fact, a two-and-a-half ton SUV. 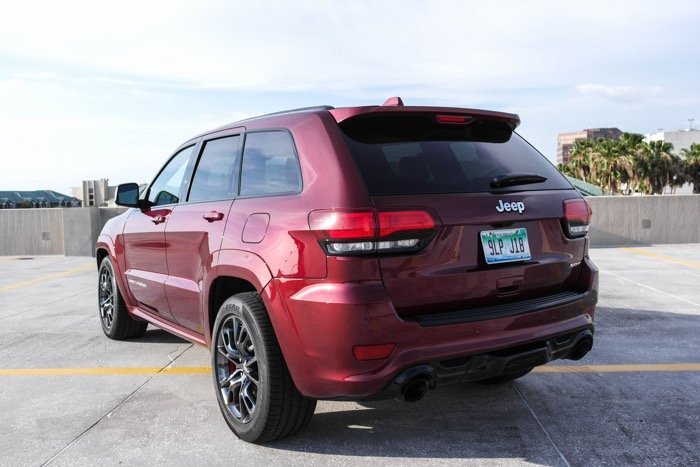 Ride quality from standard-issue Bilstein adaptive dampers firms up nicely in the sportier of the Jeep’s five driving modes, while the default “Auto” mode represents the best of both worlds with a buttoned-down but perfectly streetable ride compromise. For control freaks like me, the SRT “Custom” mode allows the driver to save independent selections for the Jeep’s various adjustments, including shock stiffness, transmission shift speed, steering weight, throttle response, stability control sensitivity and more. Not every manufacturer allows this kind of control, but it’s welcomed. 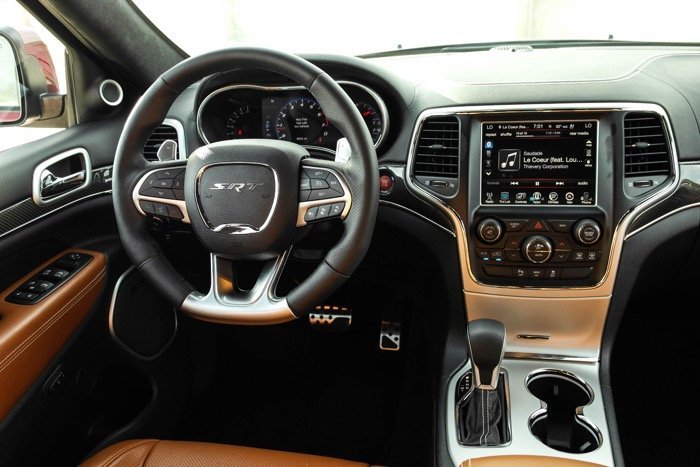 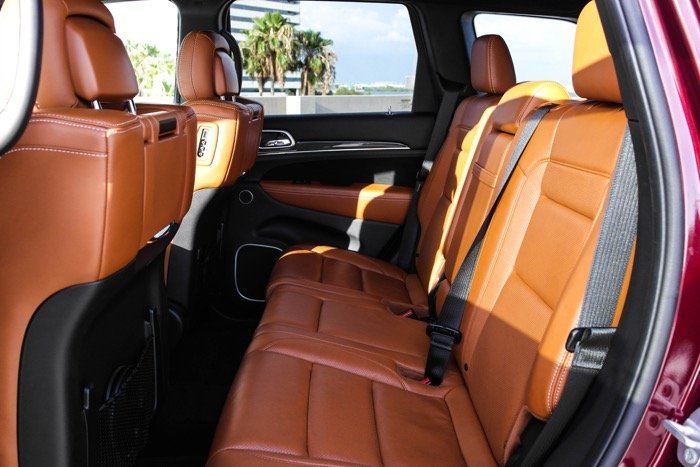 At just under $77,000 as-tested, the cabin’s design and materials come under a level of scrutiny that the Grand Cherokee’s designers may not have considered, especially since the price of entry for the non-SRT model is a family-friendly $29,995. Luckily, the SRT’s cabin holds up well to inspection by even devoted dash strokers. The $1,495 Laguna leather package on our tester added thick tobacco-colored hides, which helps to up the wow factor, as do glossy carbon-fiber accents around the cabin’s beltline. Feature content is commendable, expected given the price point, but it is at least encouraging to know that your 77 stacks are going somewhere worthwhile – in addition to a lengthy standard suite of safety items designed to keep this big beast shiny side up, there are dual seatback DVD monitors, a panoramic sunroof, a Uconnect 8.4″ touchscreen and heated and cooled front chairs to keep riders occupied – as if boredom was a concern anyway. 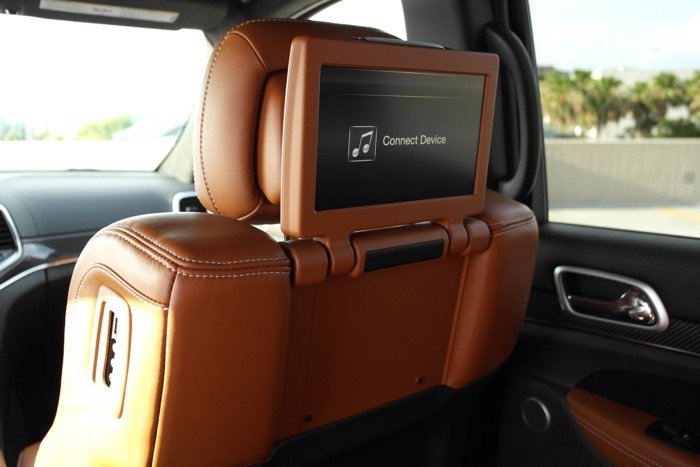 The Grand Cherokee SRT is akin to a big, dumb, happy dog, somewhat unaware of its own power but always eager to please its owner. No one in their right mind needs a big SUV with a (nearly) 500 horsepower V8 under the hood (and, while we’re at it, launch control and massive, sticky Pirellis). But just try to keep from wanting one with every fiber of your being once you’ve driven it. It’s a truck that seamlessly blends the line between cruiser and bruiser, adding a touch of style to round it all off. It’s quite the package, and yeah, I really, really want one. 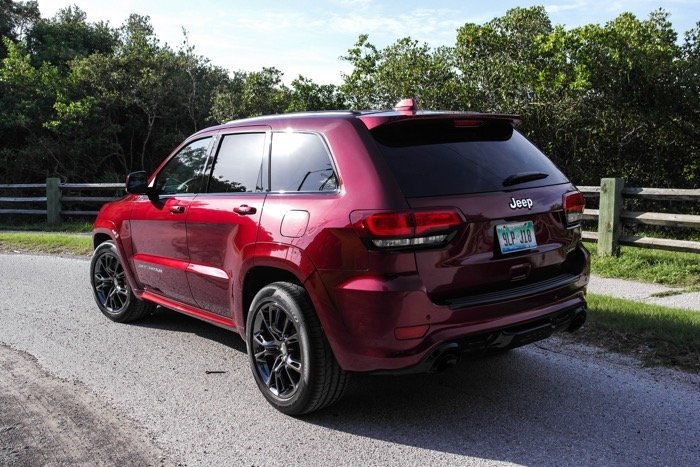 A menacing-yet-approachable street fighter that makes the prospect of being stuck with carpool duty strangely appealing.