Amid a sweltering mid-summer heatwave, the IMSA WeatherTech Sportscar Championship descended on Connecticut’s iconic (and beautiful) Lime Rock Park last weekend for the Northeast Grand Prix. Although the top-dog Prototype class skips this event for purposes of traffic – the short 1.5-mile track is composed of flowing, fast, and mostly right-hand corners, but its size doesn’t lend itself to the massive speed advantages the Prototype cars carry – the GT LeMans, GT Daytona and Prototype Challenge classes were present and accounted for. As it is, even well-driven GTD-class cars were lapping in the low 50-second range, making a lap around Lime Rock more akin to a typical autocross run than a racing circuit, time-wise. With short laps and high average speeds – over 100 MPH in most cases – the racing is usually intense, and this year did not disappoint. 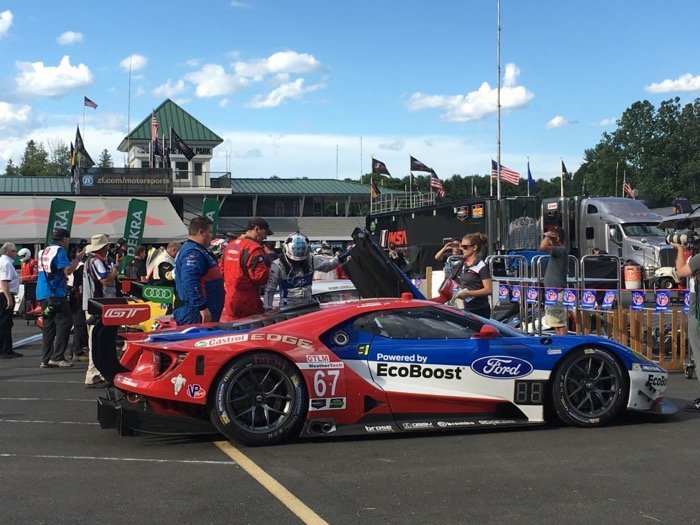 After strong qualifying efforts by Richard Westbrook in the #67 Chip Ganassi Racing Ford GT, who snagged pole position, and Dirk Werner in the #25 BMW M6 just 0.086 seconds behind, both cars eventually succumbed to on-track incidents that dropped them down the finishing order. The M6 retired completely after a nasty collision with one of the factory 911 RSRs midway through the race, and contact during the first lap forced the #67 Ford GT into an excursion off-track, after which it spent the rest of the race moving back up the field to a respectable third place. Nobody could match the extremely strong race pace of the #4 and #3 Corvette Racing C7.Rs, resulting in an eventual one-two finish. Lime Rock marked the team’s 100th overall class victory, a remarkable achievement in light of the stiff competition the team has faced over the past seventeen seasons. 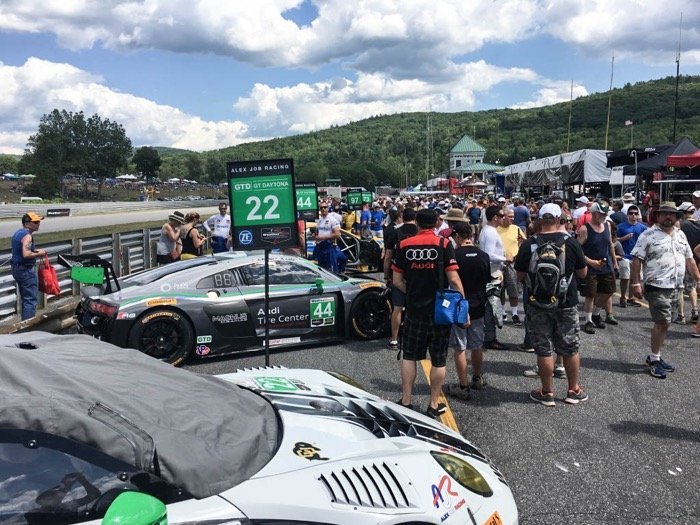 Back in GTD, qualifying saw Lamborghini and Audi snatch the first three qualifying spots, with the #16 Change Racing Huracan of Spencer Pumpelly taking pole position and the two Stevenson Motorsports Audi R8s in close pursuit. Typical for the class, the top eight qualifying spots were separated by just half a second, though few would have predicted that the 11th-place qualifying effort of Magnus Racing’s Audi R8 would have resulted in the team’s class win. After a hard-fought race with various teams leading at one point or another, it was the R8 of John Potter and Andy Lally that took it home. The #6 Stevenson car finished second, while the #33 Riley Motorsports Viper of Ben Keating and Jeroen Bleekemolen showed strong pace throughout the sprint race, leading at one point but settling for third in the end. Fastest class lap of the race fell to Christina Neilsen in the Scuderia Corsa 488 GTE, though heavy contact with a PC car left the Ferrari without a door and the lengthy resulting pitstop saw the team drop down the order. Strong pace was shown by the Alex Job Racing #23 911 GT3R, which led the race for a number of laps, but eventually suffered issues caused by contact and dropped out of the race altogether with just a handful of laps remaining. 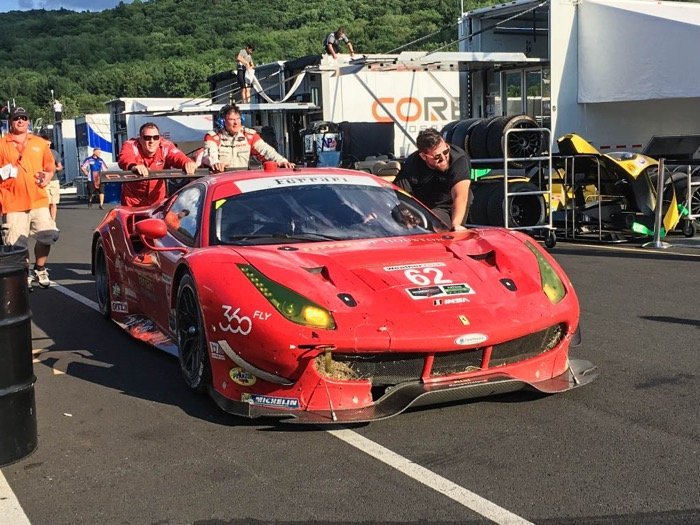 Amid a field of eight entries and much traffic, it was Starworks Motorsports that took the top spot at the checkered flag for the Prototype Challenge class. Alex Popow and Renger van der Zande teamed up for the winning drive, with Popow starting the race from fifth and working hard to move up the field to the lead before handing off to van der Zande. Finishing less than a second behind the winning Starworks car, the PR1/Mathiasen Motorsports entry driven by Tom Kimber-Smith was in with a shout after snatching pole position, but in the end couldn’t match the pace set by the #8 car. Starworks’ win was their third of the season. 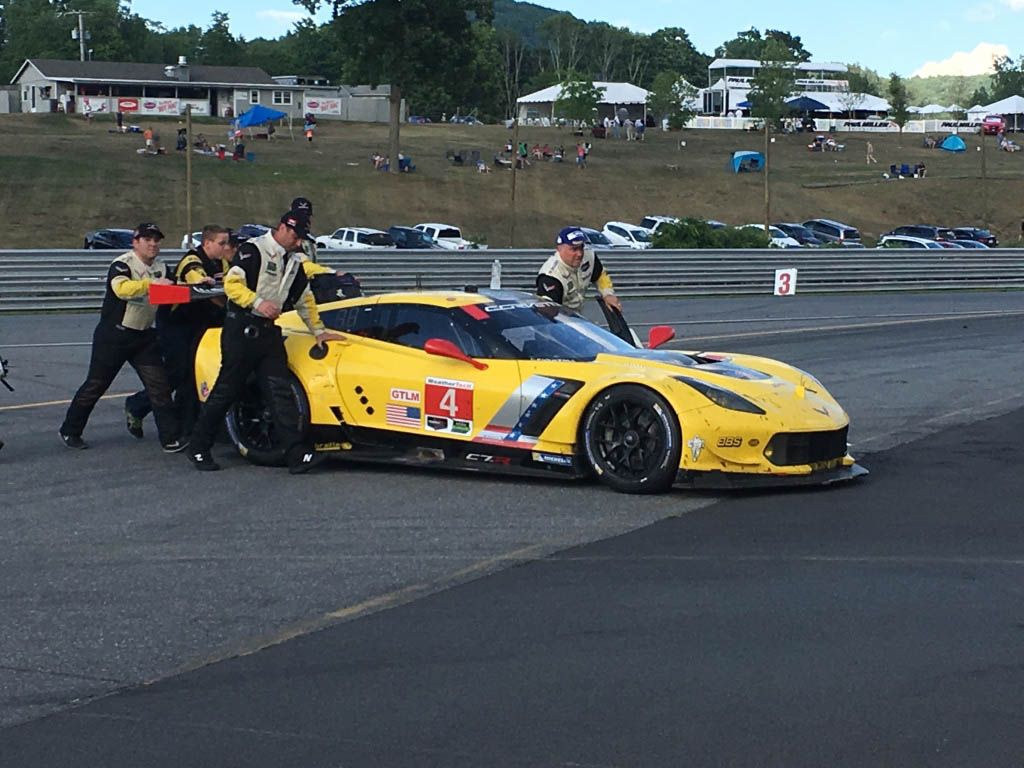 After Saturday’s race, Starworks extended their lead in the PC championship overall, while the #51 of Mathiasen Motorsports stands second and the #54 Core Autosport entry is third. Corvette Racing looks to be in good standing for the championship, with first and third places occupied from a team standpoint and Chevrolet leading overall as manufacturer. Despite a tough day, team Scuderia Corsa still leads the #44 Magnus Racing R8 and Alex Job’s #23 911 GT3R. Manufacturer standings shake out slightly differently, with Audi leading Ferrari and Porsche. 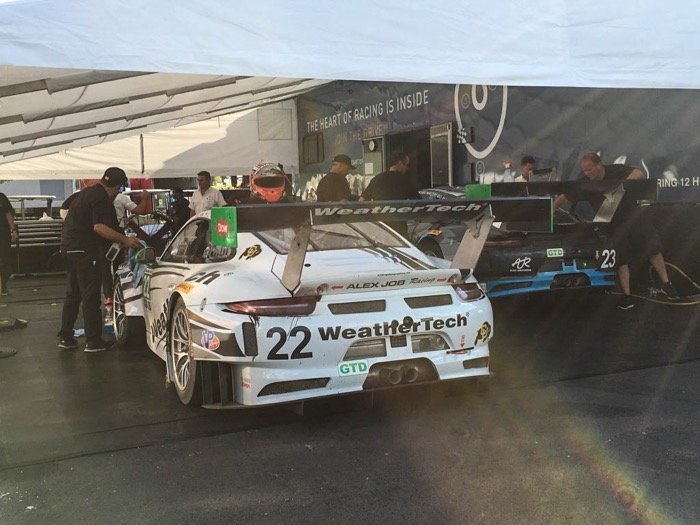 All four classes will be on track again for the next race at Road America in Wisconsin, the Continental Tire Road Race Showcase, scheduled for August 5 – 7. From there, the series will head to VIR, COTA and finally Road Atlanta for the championship final.