Would-be pretenders to the BMW 3-series’ sales throne rise and fall about as often as the sun. As a car lover, this is a good thing. Witness the long list of near-luxury sedans whose manufacturers designed them to do many things – sometimes all things – more successfully than that stalwart compact sedan from Bavaria. Want great handling? Look no further than the Cadillac ATS. A beautiful, luxurious interior? Mercedes C-class, right this way. Reliability, value, and a dash of banzai Japanese styling thrown in for good measure? The current Lexus IS is one of my personal favorites. And yet while many try, most carmakers fail to lovingly recreate everything that the 3-series ideal represents, including but not limited to dynamic handling, zesty powerplants, a driver-oriented interior and styling that stands the test of time. With their latest A4, however, Audi appears to have finally picked up on the plot that BMW seems to have lost in recent years. 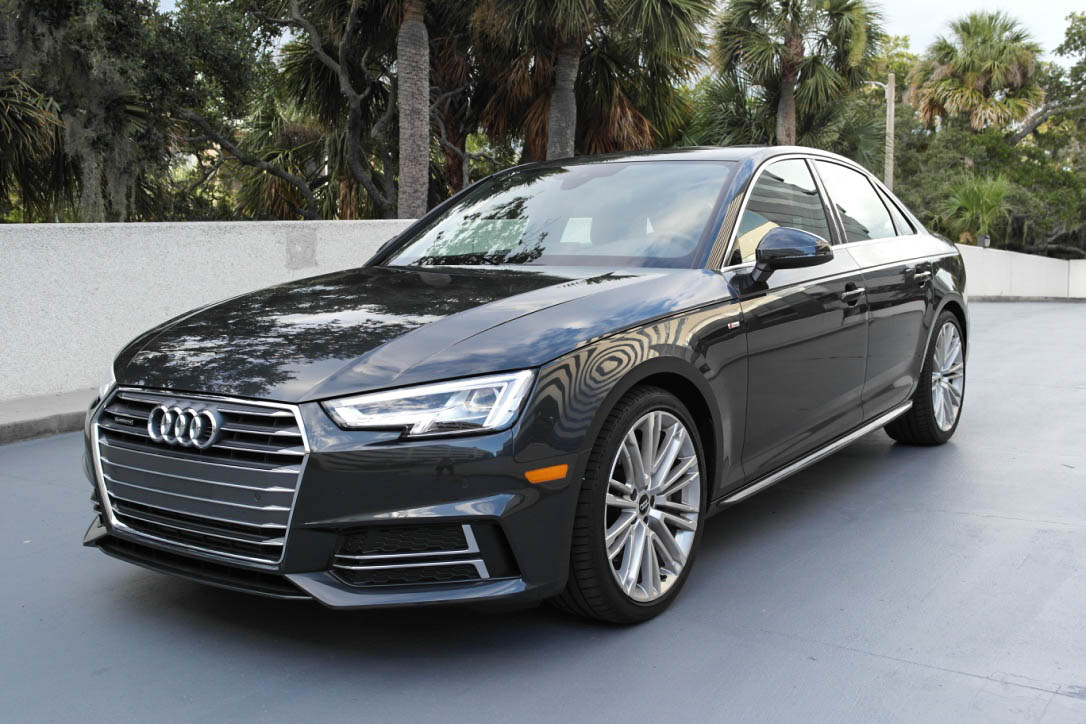 I’m sure that last statement made more than a few car enthusiasts’ eyes roll. After all, the two features so crucial to driving nirvana, the manual transmission and rear-wheel drive, are still offered by BMW but are unavailable in the A4 at any price. How could the two cars possibly compare, then? Well, I’ll give you one solid reason: the storied 3-series legend that the car forum set picked up on in let’s say, the last 20 years, wasn’t built solely around rear-wheel drive and manual transmissions. That’s simply the way Germany built ‘em back then. Rather, the BMW 3-series of the 1970s and 80s represented the kind of fully-realized Teutonic combination of design, build quality and overall driving enjoyment that became the stuff of legend. And that legend has now been almost completed marketed and squeezed out of their vehicles such that BMW, now a quite large carmaker by anyone’s measurement, has removed much of the driving joy the standard 3-series used to offer up. 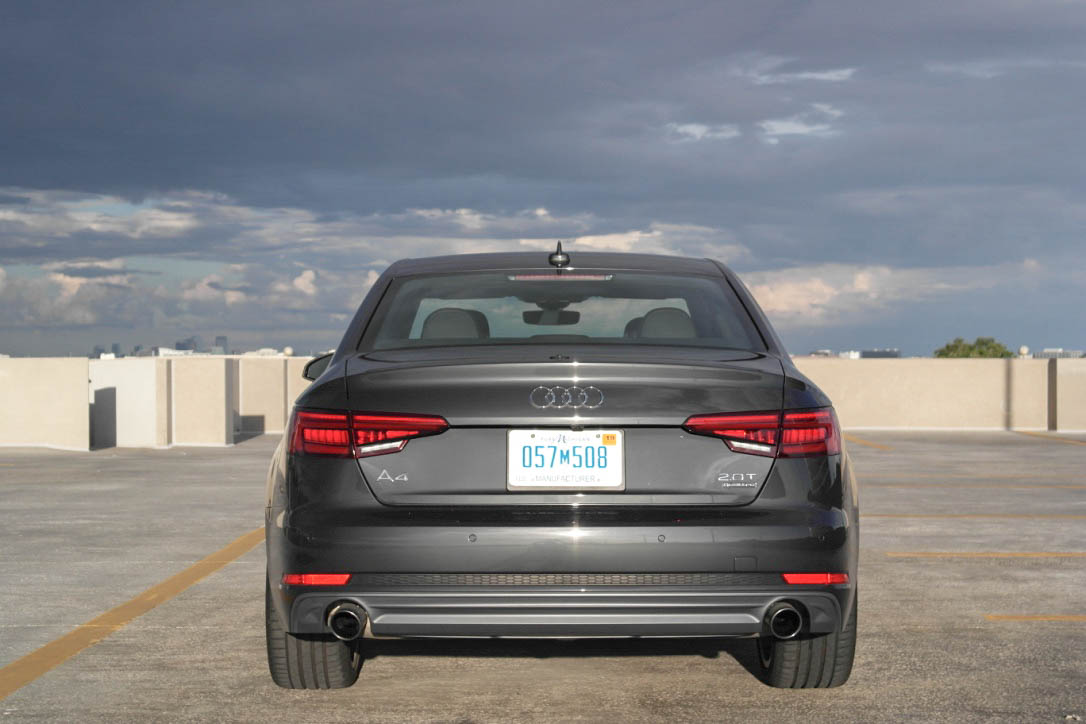 Now granted, they’ll still go around corners quite well and that straight-six turbo powerplant in the 340i is one of the best in the business. But other manufacturers have already successfully distilled the best individual parts of the 3-series – steering, handling, styling, interiors – into their own models in some form or fashion. Meanwhile, Audi’s quietly formulated the best cocktail of these discrete traits into its new sedan – the 2017 A4 pictured here. 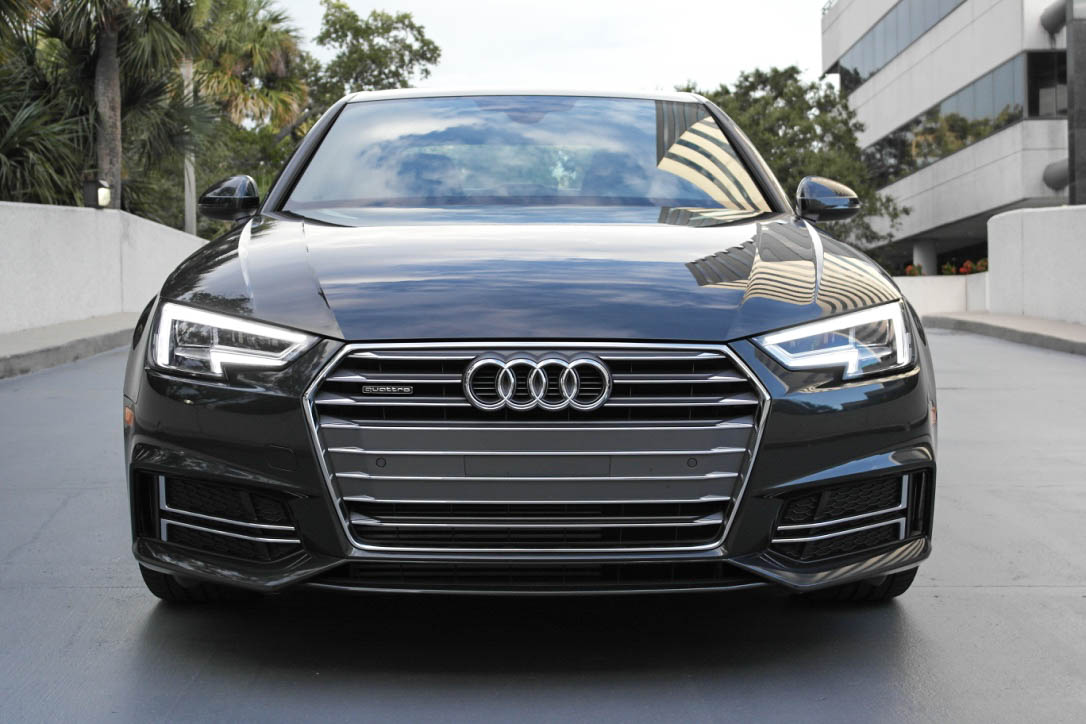 How did they do this with so little fanfare? The new car’s been on sale for a couple of months now, after all. It’s likely because, at first glance, the new car barely looks different from the last model, although that trait in itself has become a bit of an Audi trademark. There’s been a nip here and a tuck there, more angular light treatments and a wrap-around hip line accent that conspire to make the 2017 model recognizably fresh yet somehow still familiar. It’s an attractive design for sure, one made better with our car’s S-line details and 19-inch alloys. Still, nobody with a clue about cars will mistake it for anything but an Audi, though they may mistake it for an A3 or an A6, depending on their vision limitations. Size-wise, it’s not appreciably larger than the car it replaces, but intelligent use of aluminum and a carving out of interior space means it’s both lighter and roomier than the outgoing model. 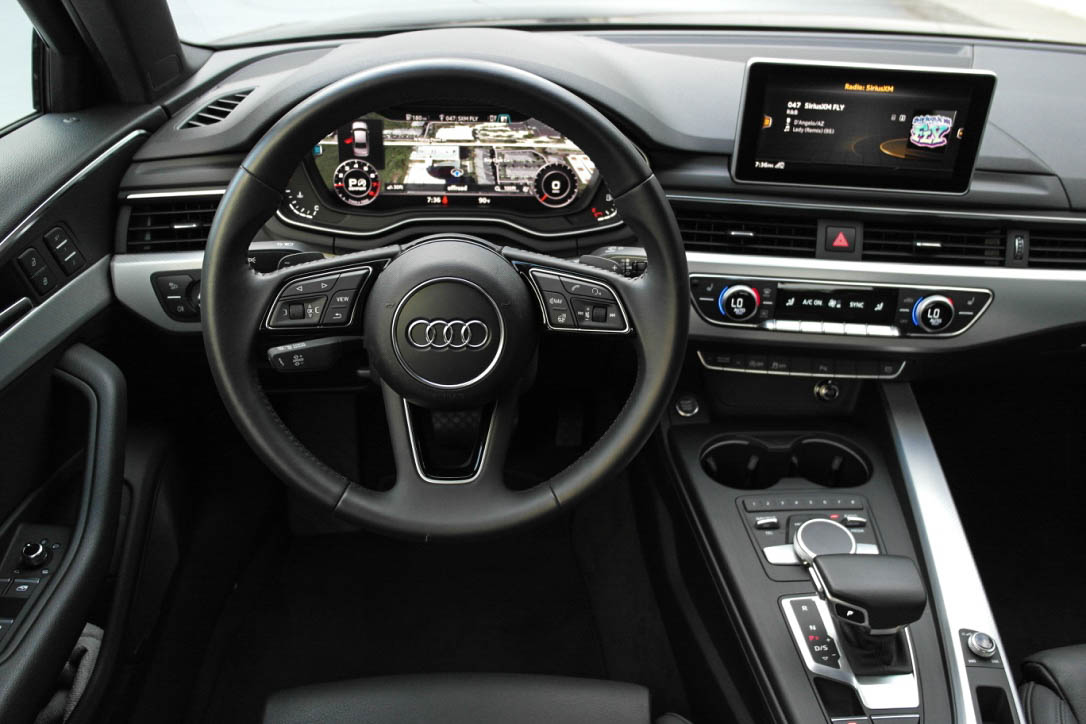 Both front-wheel drive and Quattro all-wheel drive models now sport the same 7-speed S-tronic dual-clutch transmission, which shifts impressively fast in sport mode but retains the around-town behavior of a traditional automatic, exhibiting none of the lurchiness we’ve come to expect of similar setups. A 2-liter TFSI powerplant once again provides motivation, this time to the tune of 252 horsepower and 273 lb-ft, which coupled with the fast-acting transmission, make short work of passing maneuvers and around-town sprints. Creamy from idle to redline, the TFSI engine is a model of refinement at all times, though the S-tronic’s tendency in normal mode to search out seventh gear and stay there means “Sport” is warranted for the utmost in throttle response and to really get the most out of the turbocharged four-cylinder. The new 2.0T splits the difference between most competitors’ “small” and “large” engine options so effectively, it appears unlikely that a more powerful mill is in the cards, short of the new S4’s turbocharged 3-liter V6. 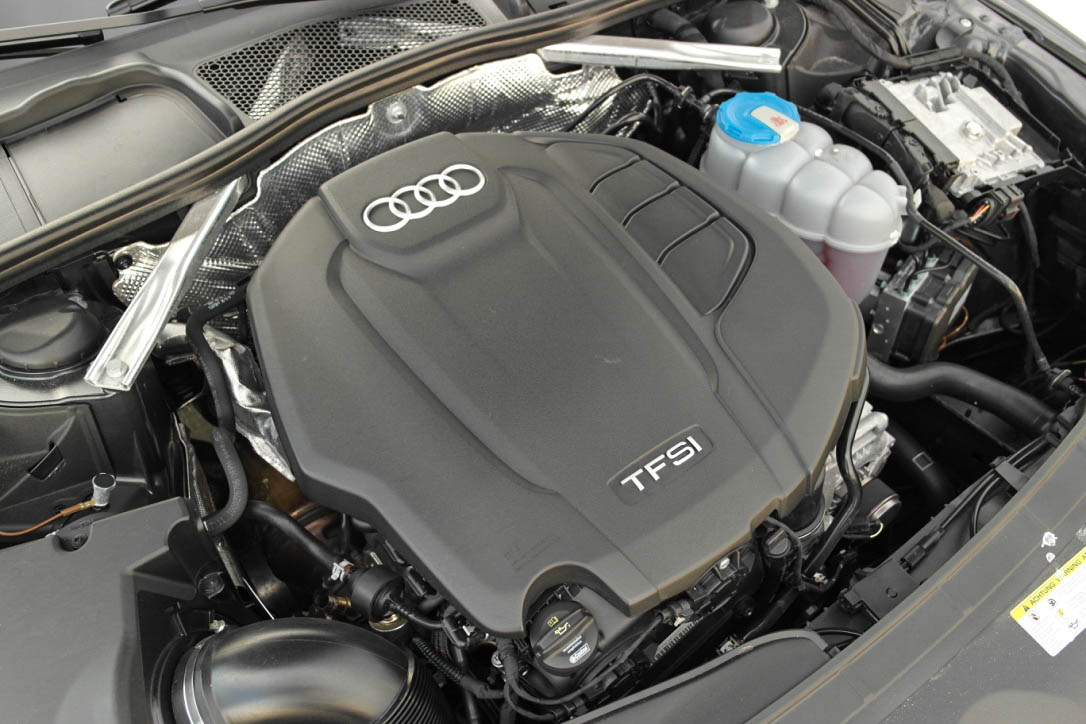 Our Sport package-equipped tester sat on springs that bring the sedan one inch closer to terra firma, as well as firmer dampers and 19” alloys with Hankook summer tires. These are not features you would normally expect to result in a comfortable tradeoff between ride and handling, but the A4 nevertheless returns a pleasant cornering balance with minimal body roll and a firm, but never harsh, ride over the rough stuff. Sharp impacts managed to be rounded off in a composed manner that’s been absent in sporty BMWs of late. 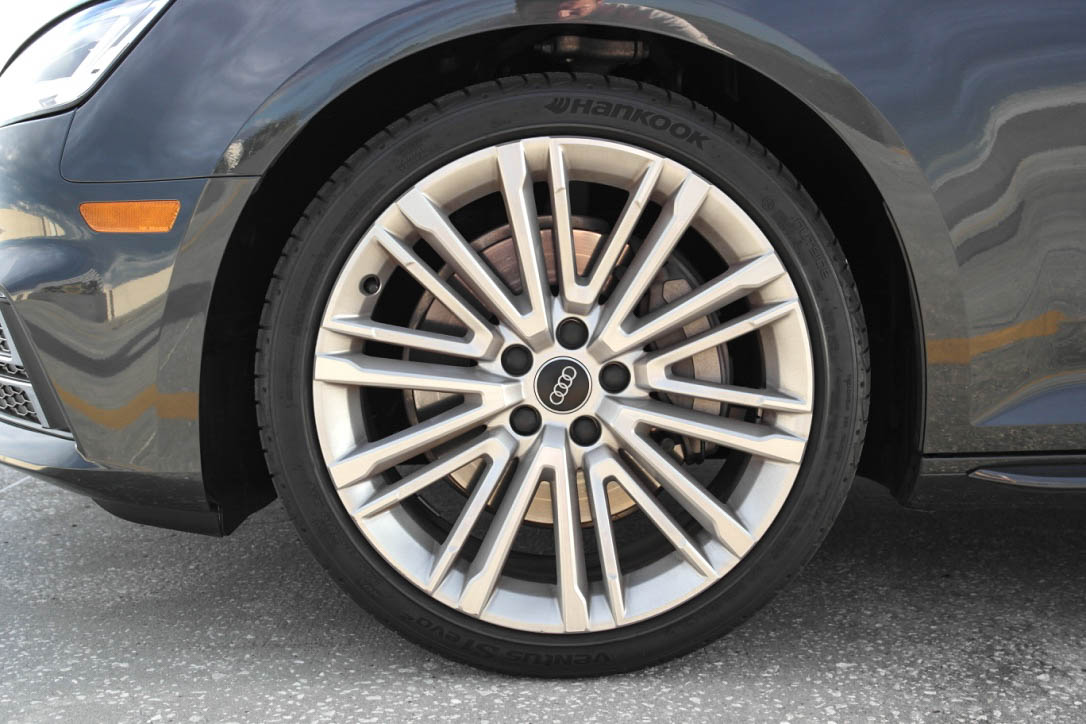 If the exterior revisions are a model of restraint, the interior is where Audi clearly went above and beyond. Taking a page from the glass cockpits of modern airliners, Audi’s new digital gauge cluster, or “virtual cockpit”, allows the driver to not only configure the information displayed to suit their own preferences, but also offers a massive, Google Earth view of the car’s current location. It’s intriguing almost to the point of distraction at first, but once you’re used to it, you’ll wonder how you ever suffered by with center-screen navigation setup. First world problems, indeed. 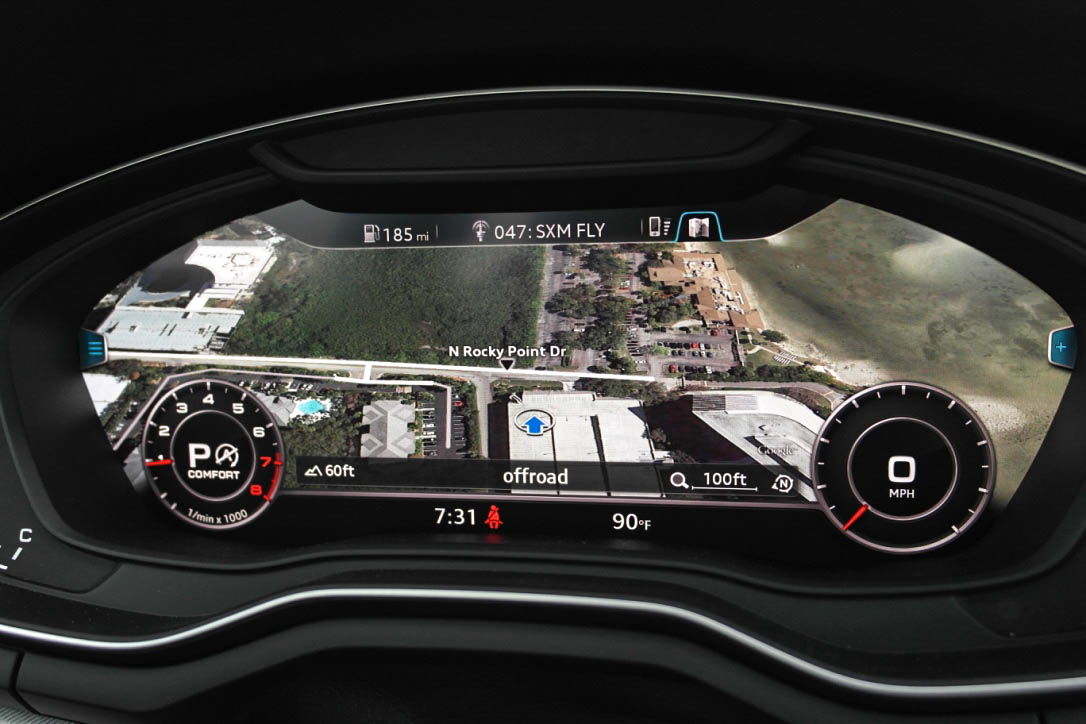 Even without the fancy gauge cluster, which is standard on Prestige trims and available on our Premium Plus tester as part of a $3,250 Technology package that also brings navigation and blind spot monitoring, the rest of the interior is a wonderful place to pass miles in. If there’s one criticism to be leveled, it’s that our tester’s coal bin black leather and brushed aluminum isn’t exactly warm and inviting at first glance, unless you happen to be a German minimalist. Soon, though, the new cabin’s build quality, seat comfort (aided by our car’s multi-adjustable sport seats) and fantastic ergonomics win you over. The gear shifter is particularly well thought out and placed at the perfect height to operate the MMI control knob and peripheral buttons. Rear seat room and trunk space are both good for the class, a benefit of the A4’s front-wheel drive architecture. Rear-wheel drive might be more soulful, but it seriously impedes on rear cabin room. Tradeoffs. 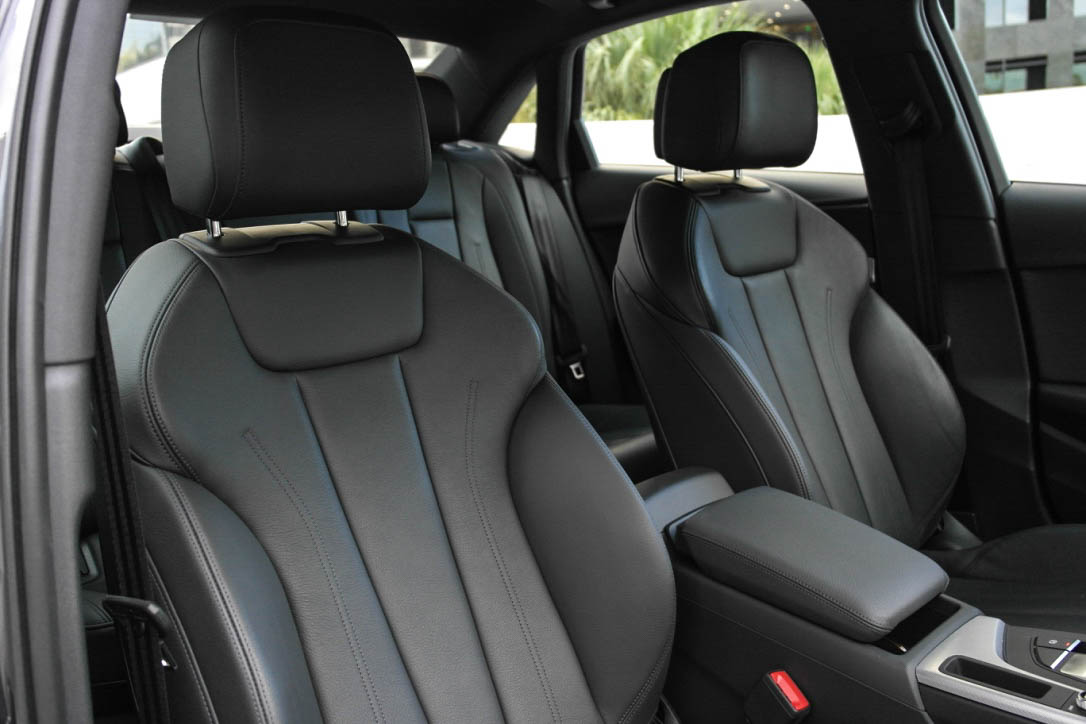 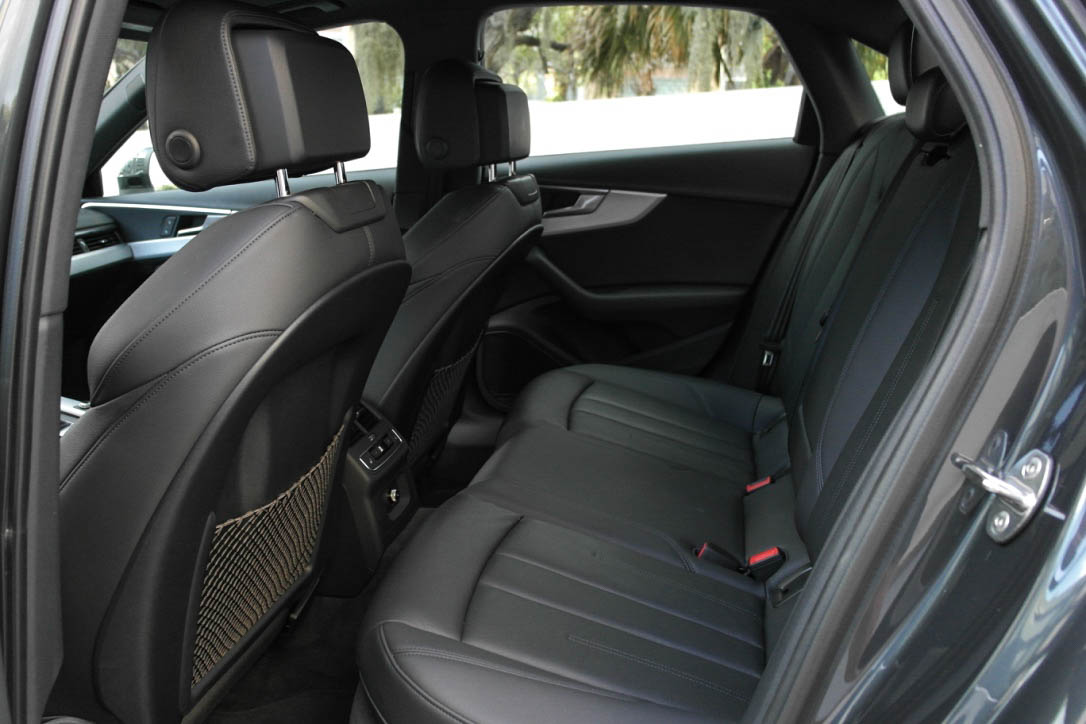 Even with our test vehicle’s sticker price closing in fast on $50 grand, the A4 still manages to feel like good value for money. Even the entry-level Premium trim level includes standard leather upholstery, a power sunroof, Xenon headlights, a backup camera and a pre-collision braking system in the cost of entry – things that are optional extras with almost all of the A4’s competition. For ticking nearly every option box available (the Prestige trim level opens up a few items unavailable on lower trims, like ventilated seats, adaptive cruise control, and more), $49,075 as-tested feels like a decent deal. 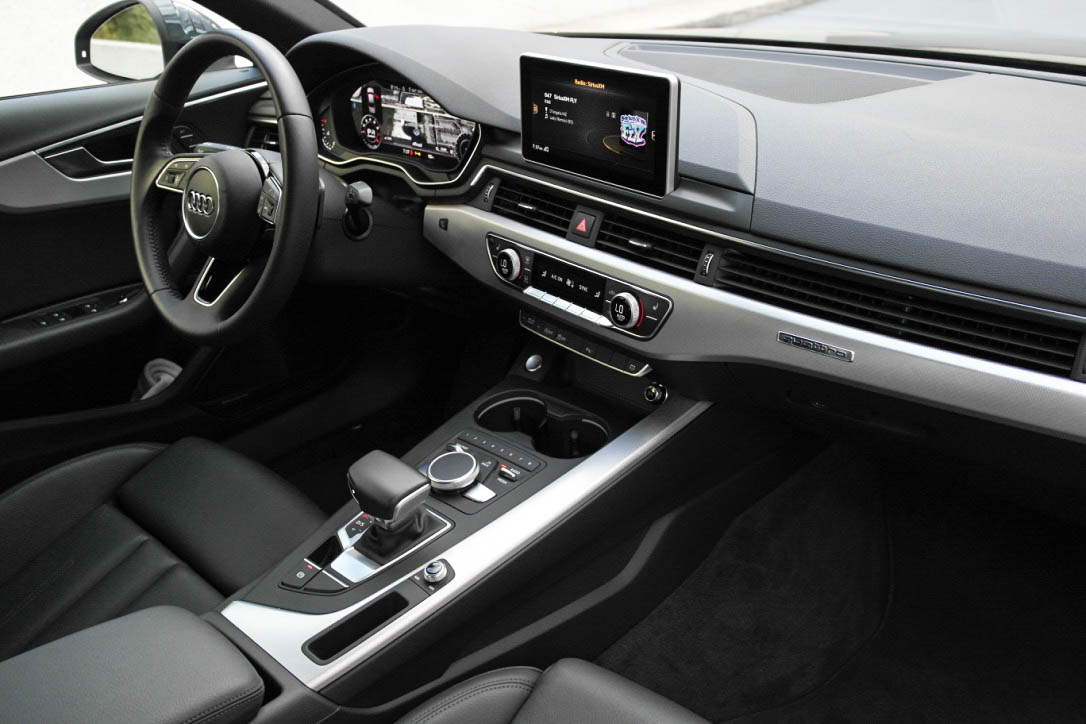 Mildly tweaked on the outside, the new A4’s lighter chassis, sleek, tech-laden interior and strong feature content make it the new class benchmark for those shoppers for which overtly sporting dynamics are not a top purchase criteria.