Possibly more than any other mainstream automotive segment, image is important for pickup buyers. Especially full-size pickup buyers. Brand loyalties run deep, and while domestic manufacturers win the lion’s share of sales (understandably so, given the segment’s U-S-of-A origins), the market is so vast that even table scraps represent real dollars to new entrants. Witness the Toyota Tundra and Nissan Titan – pretenders to the throne, perhaps, but well-made trucks in their own right. The Tundra’s done alright for itself, despite a lengthy time on the market without a redesign, but Titan sales have languished in recent years – for the last two sales years, it has accounted for just 0.5% of full-size truck sales. A full redesign was in the cards, then, and the XD model seen here is the first result of those efforts. 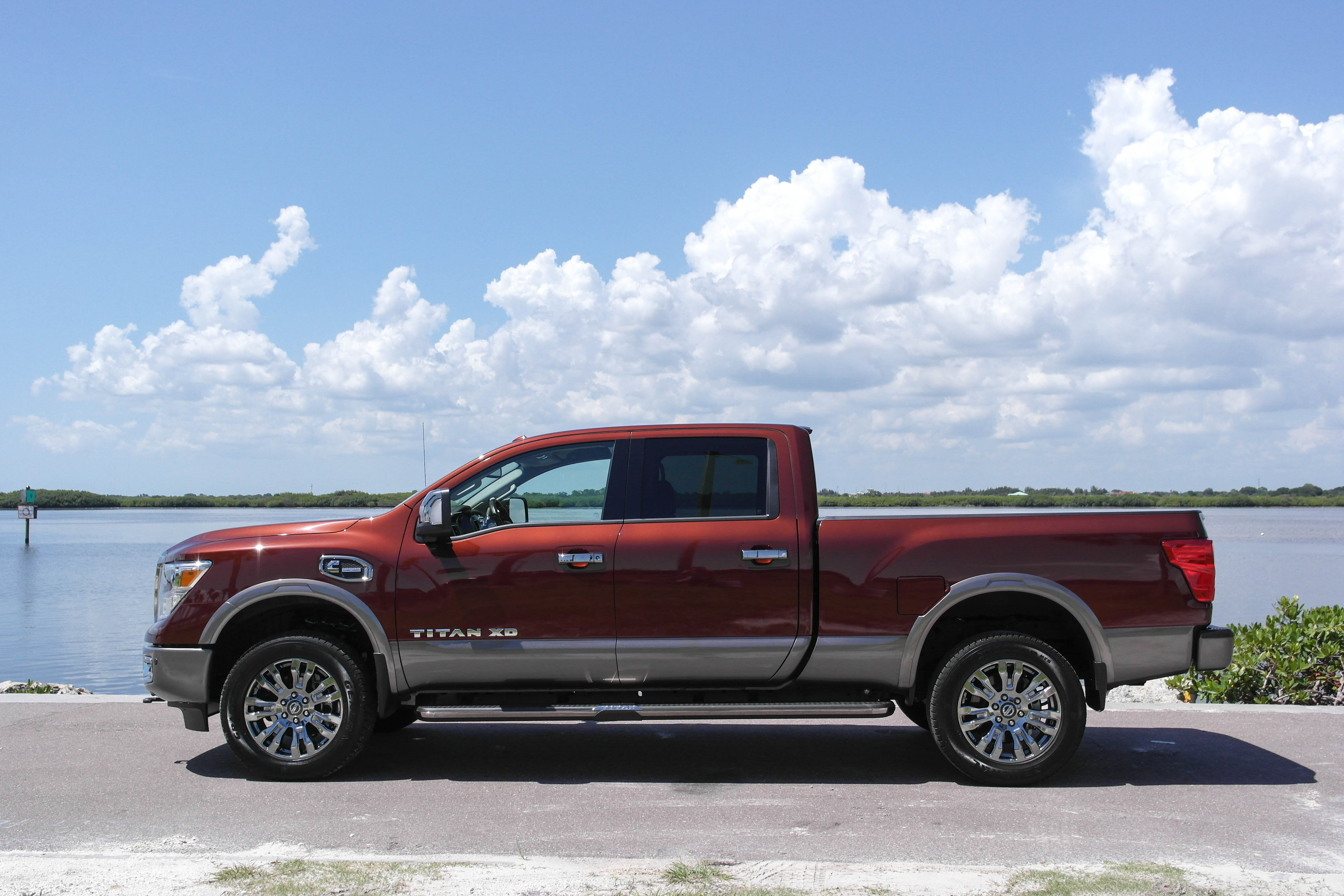 Some history on the Titan: first introduced for 2004, Nissan managed to snap up more than 80,000 sales that first year, and sales figures stayed strong for another two years afterwards. The truck segment is fickle, though, and when the competition gets perennially refreshed and your truck doesn’t, it becomes easy to overlook. As a result, Titan sales dwindled down to a low of just 12,140 units in 2015. Compare that with over 780,000 sales of the Ford F-Series that same year (though that number includes Super Duty models), and you start to see the magnitude of Nissan’s uphill trek. Even the Tundra, itself no spring chicken, garnered 118,000 sales in 2015. Drastic changes had to be made if the Titan nameplate was going to stand out. 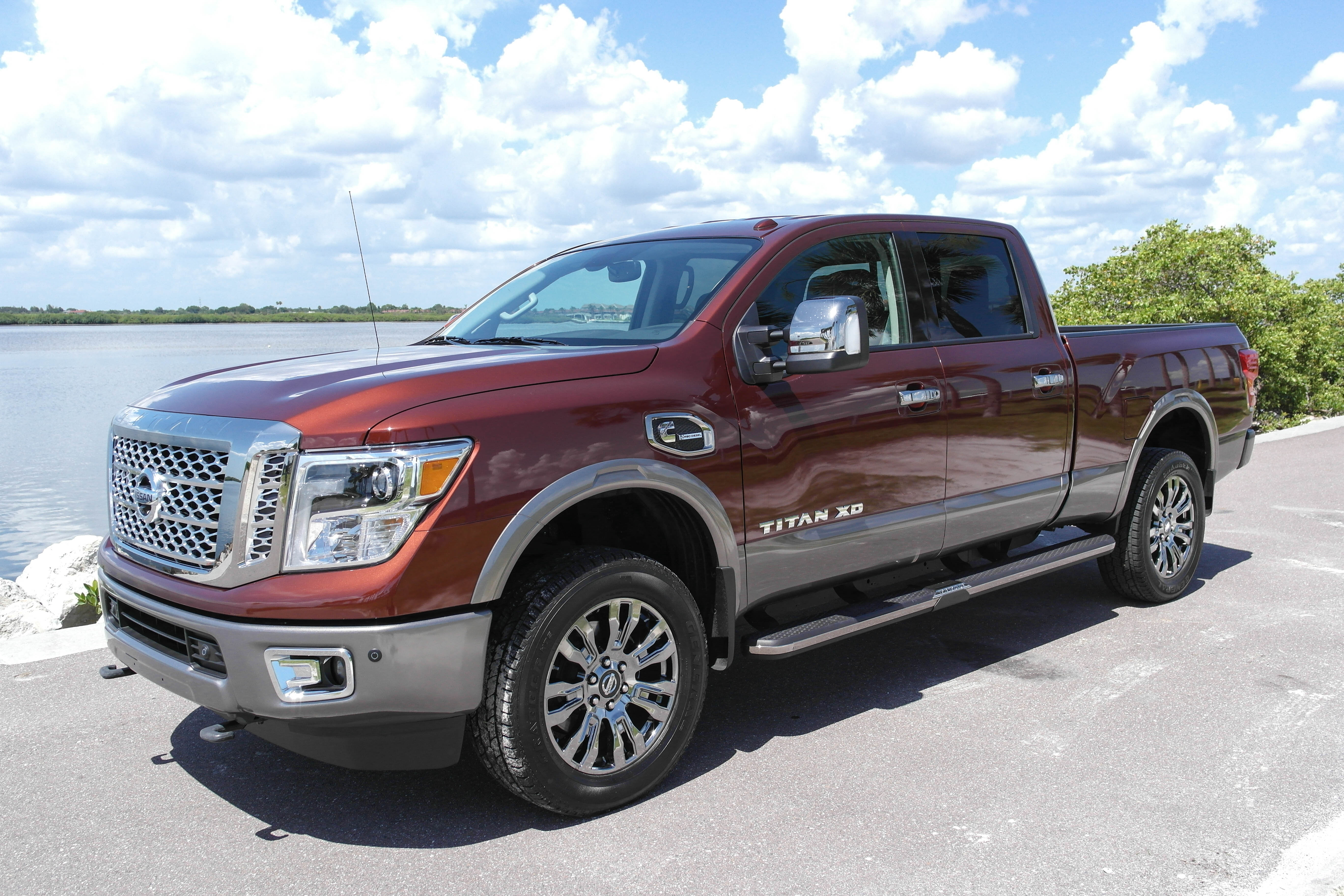 Enter the XD. Filling an empty slot in the market between half-tons like the F-150 and beefier ¾-ton workhorse models, the Titan XD is built on a heavy-duty ladder frame and can be equipped, as ours was, with a turbodiesel Cummins V8. Nissan touts that this truck’s affordability and fuel economy fall closer to half-ton pickups, while its capabilities are more like a heavy-duty’s. So how does it measure up? Well, with a towing capacity of over 12,000 pounds, it certainly compares favorably to half-tons like the Silverado 1500 and F-150, edging them out by a thousand pounds-plus of capacity. That 12,300 pound figure matches up well with the current F-250, in fact, which tows in the region of 12,500 to 14,000 pounds depending on equipment. But with a bed capacity just shy of 2,000 pounds, our luxurious Platinum Reserve tester is hampered by its elephantine curb weight of close to 7,500 pounds. Government GVWR ratings for the Titan XD don’t change based on trim level, so if hauling a literal ton of stuff in the bed is of paramount importance to you, you’d be well advised to go with a lighter trim like the S or SV, which are up to 500 pounds less portly. Ultimately, no matter which model you go for, investing in a high-quality truck bed liner is strongly recommended. Practically everything you put into the bed of a pickup truck has the potential to scratch or dent the sides of your truck bed. From construction materials to furniture, if you are going to be hauling things around, some damage to your truck bed is inevitable. However, the good news is that most of those dents and scratches can be prevented with a proper truck bed liner. Accordingly, you can learn more about some of the most popular truck bed liners out there by taking a look at Carlypso’s roll-on liner reviews. Above all, reading reviews can help you to determine which truck bed liner will be best for your needs.

But as I alluded to in the lede, character can be as important as capability in this class, so how does this big diesel XD hold itself? Well, it’s very much a truck, with a capital “T”. The XD doesn’t exhibit the sedate, sedan-like ability to blend into the cut and thrust of suburban commuting like the latest F-150 and Silverado 1500, but it’s certainly at least as refined as the HD models it’s gunning for, if not more so. The absolutely mammoth proportions of this crew cab model eventually give its driver away as more than just a weekend warrior, though. The dimensions require careful consideration in small confines, and the heavy, recirculating-ball steering setup means you’ve got your work cut out for you in small parking lots. Mercifully, once up to speed, the Titan shrinks a bit and the steering lightens. And the ride is surprisingly smooth, even unladen – a rarity among heavy-duty 4x4s.

The 5.0-liter V8’s diesel status never comes into question: from outside the cabin, it sounds like a UPS truck from the moment it’s fired up. Inside, things are fairly serene thanks to laminated side glass and a plethora of sound deadening, although the beefy 6-speed Aisin transmission could stand to go to finishing school – shifts are firm to the point of inducing light head bobs in certain conditions. The gas-powered truck, with its 390-horse, 5.6-liter Endurance V8, receives Nissan’s familiar corporate 7-speed auto, but the Cummins’ beastly 555 pound-feet of torque apparently called for something a bit stronger. 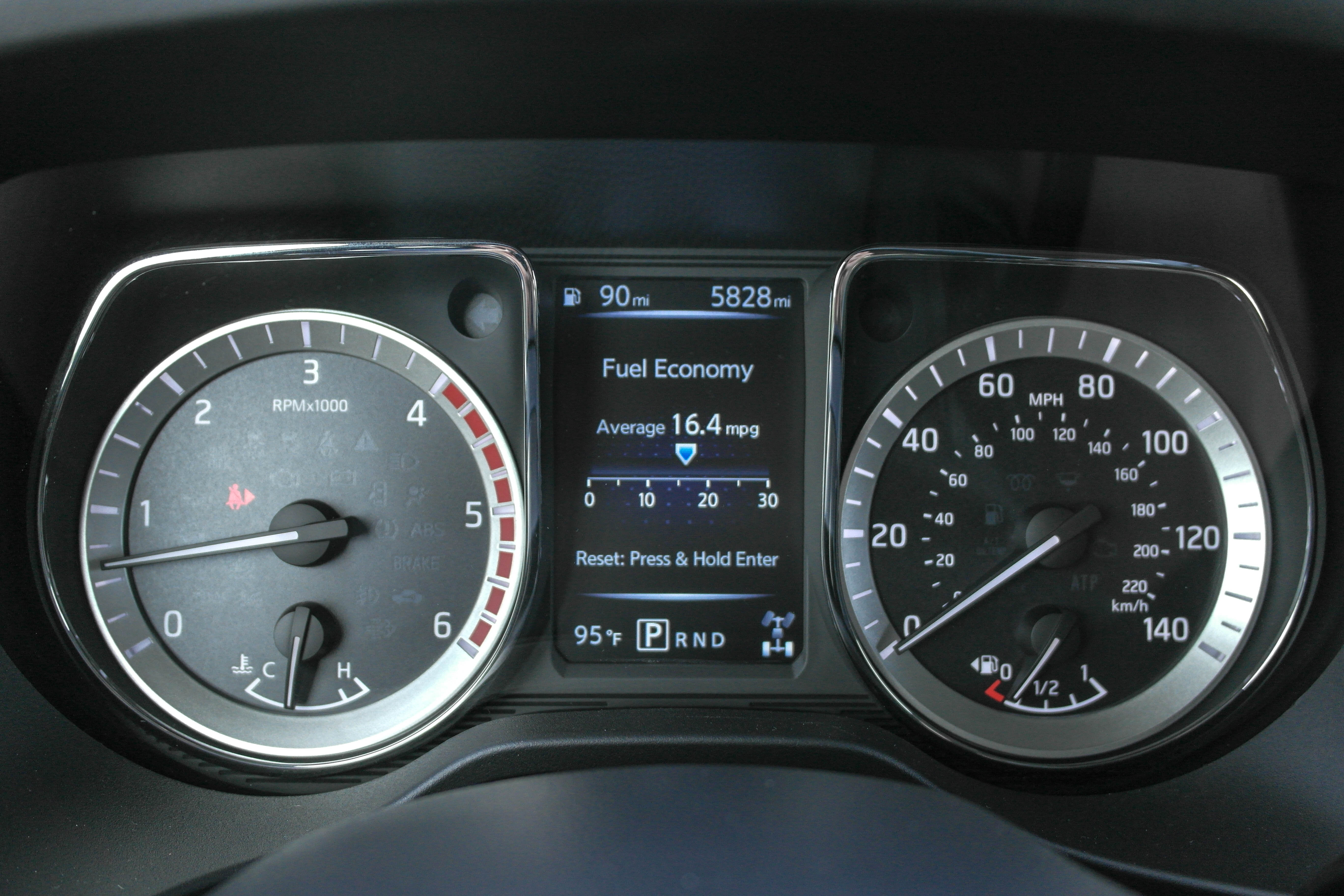 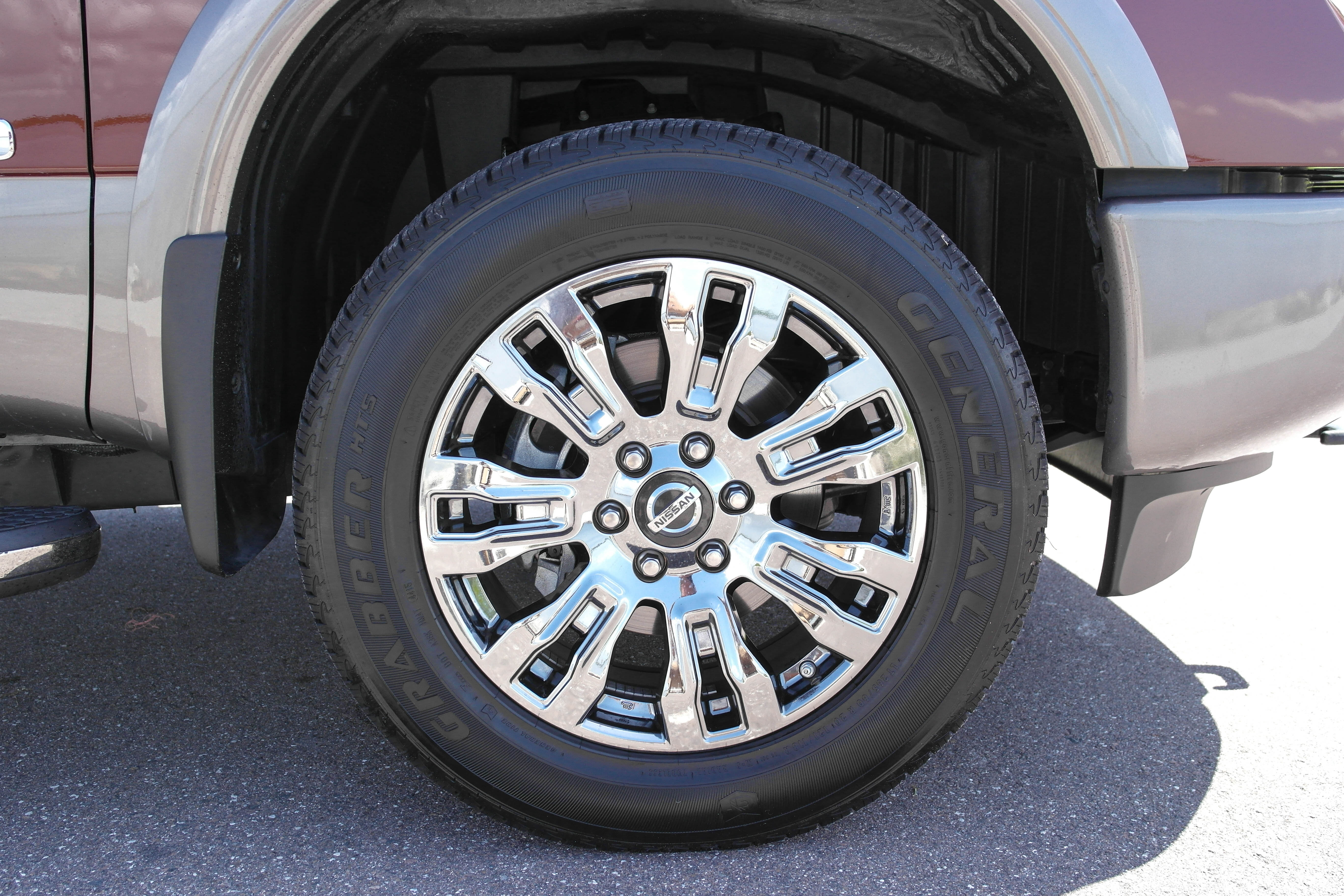 As you’d expect, the diesel feels more fleet of foot than it actually is. Car and Driver reported a leisurely 17-second stroll through the quarter mile in a similarly equipped model to ours. That’s not to say the XD doesn’t feel strong enough around town, though. Boost is on tap virtually from idle, and revs build quickly to the 3,200 RPM power peak. All that torque crests at a cruise-ship-like 1,600 RPM, which means you rarely need to venture to the tach’s upper reaches to make progress. Our week-long observed fuel economy hovered just above 16 MPG overall. We can’t compare that to EPA ratings, because manufacturers aren’t required to submit estimates for heavy-duty pickups such as these, but for reference, a Silverado 2500HD tested a couple years ago returned roughly the same mileage. 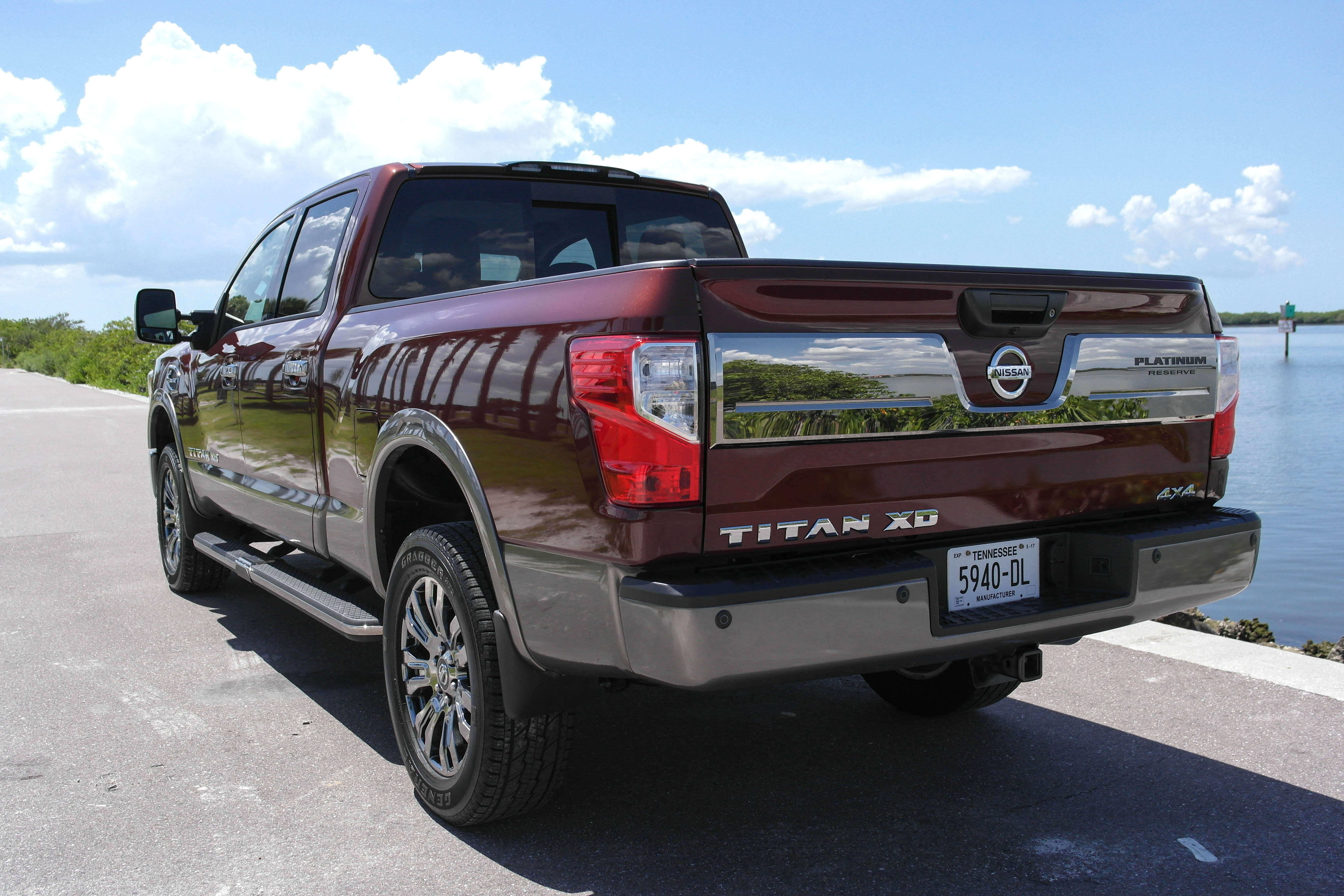 Styling-wise, the Titan at first appears to be a mash-up of greatest hits from the domestic old guard. The nose carries more than a hint of Super Duty, era undefined, as does the side-window dip and the lashings of chrome across the tail. The badges would give any Ram a run for its money, size-wise. The overall effect is certainly imposing, and while I wouldn’t quite call it fetching, a slew of compliments from passers-by during the truck’s stay with me proved that beauty truly is in the eye of the holder. 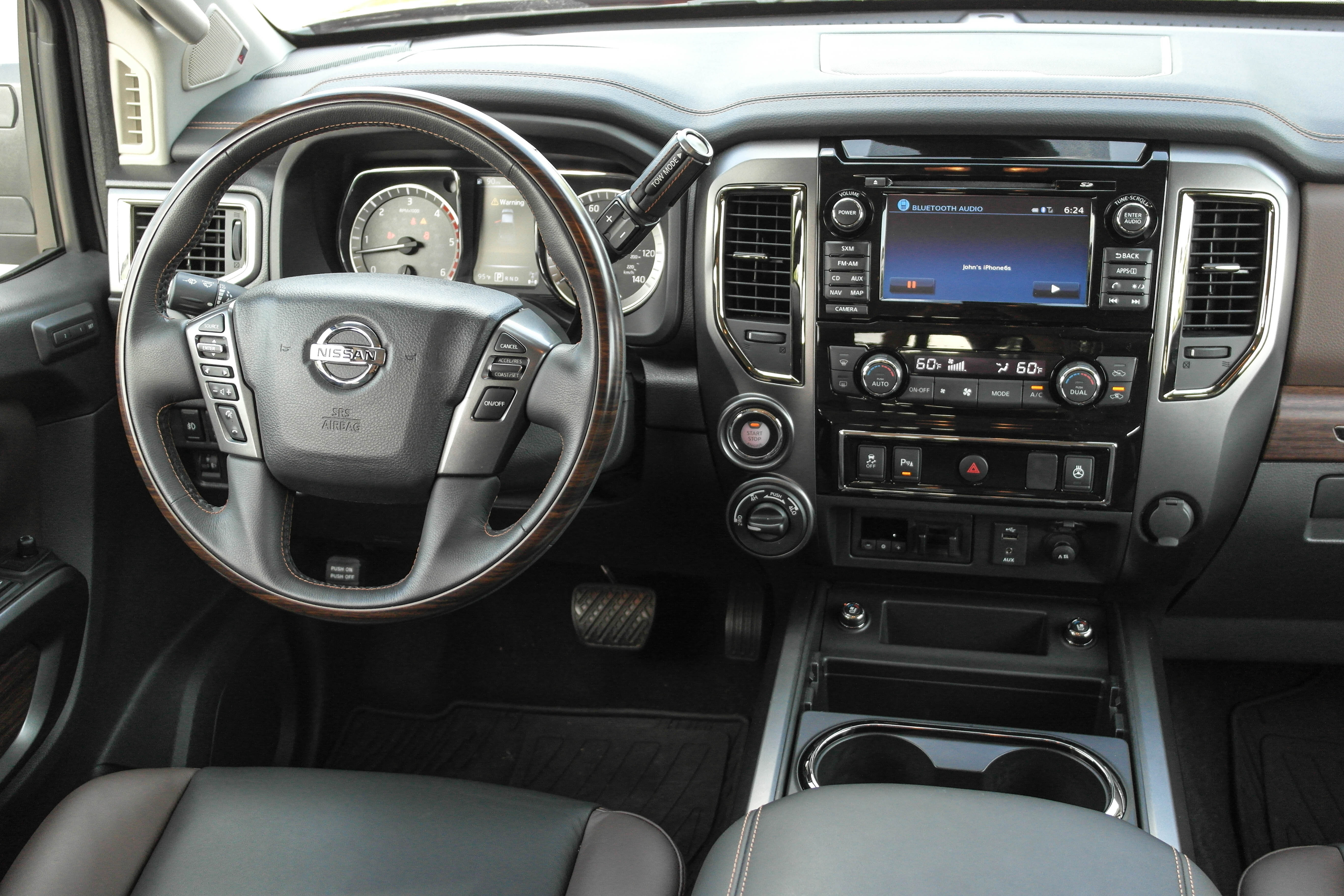 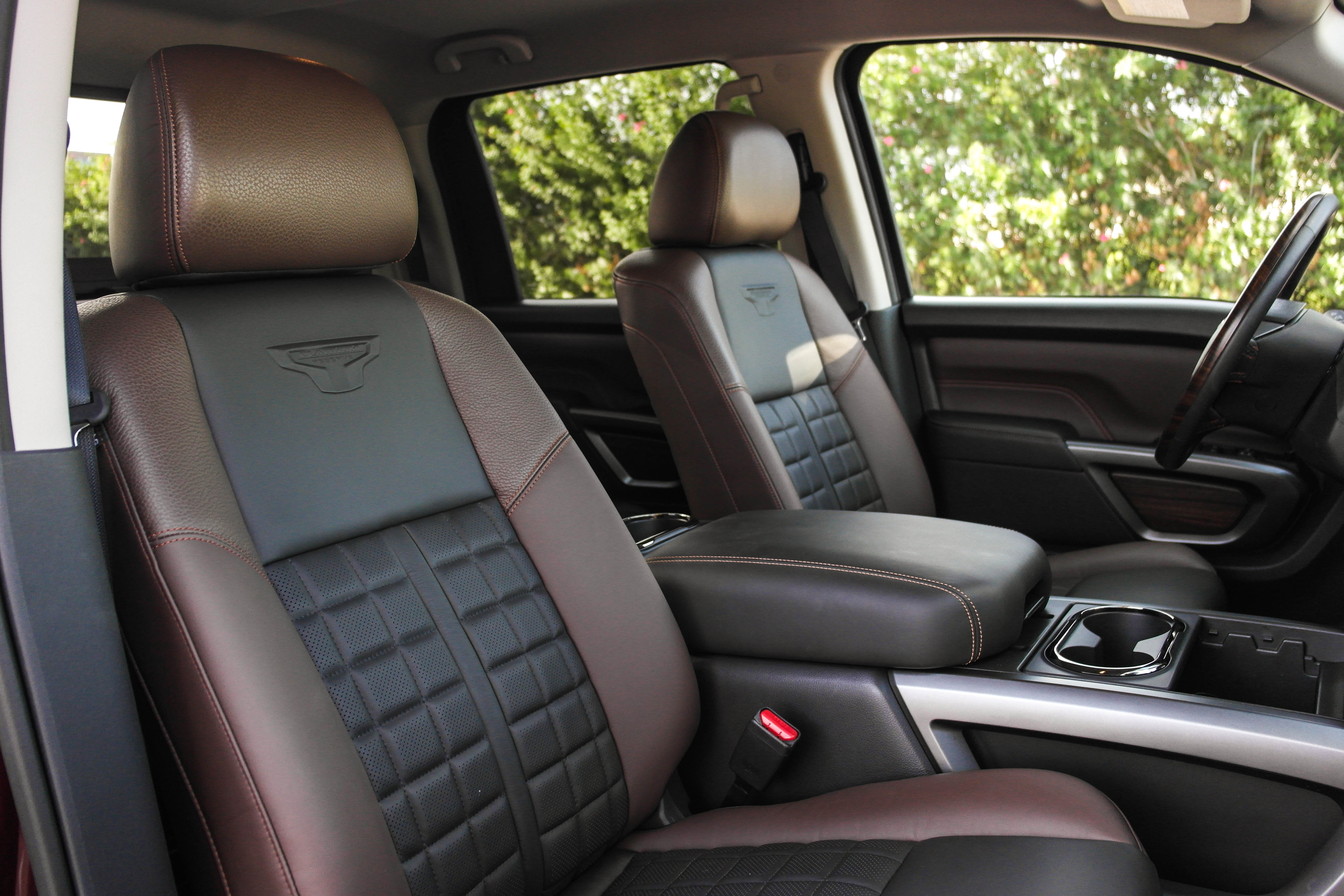 The Nissan starts to claw back some ground against its domestic competition once you hoist yourself into the luxury skybox of an interior. The mix of materials and equipment on board wouldn’t feel out of place in an Infiniti, though with a price cresting $60 grand, these machines are now expected to pull double duty on both date night and construction site. Space abounds, and even five full-size adults will still have stretch-out space. Nissan’s “zero gravity” heated and cooled front chairs proved all-day comfy, and while the touchscreen infotainment system isn’t as large or colorful as some of its rivals, it does at least work reliably and has a full compliment of large buttons and knobs. 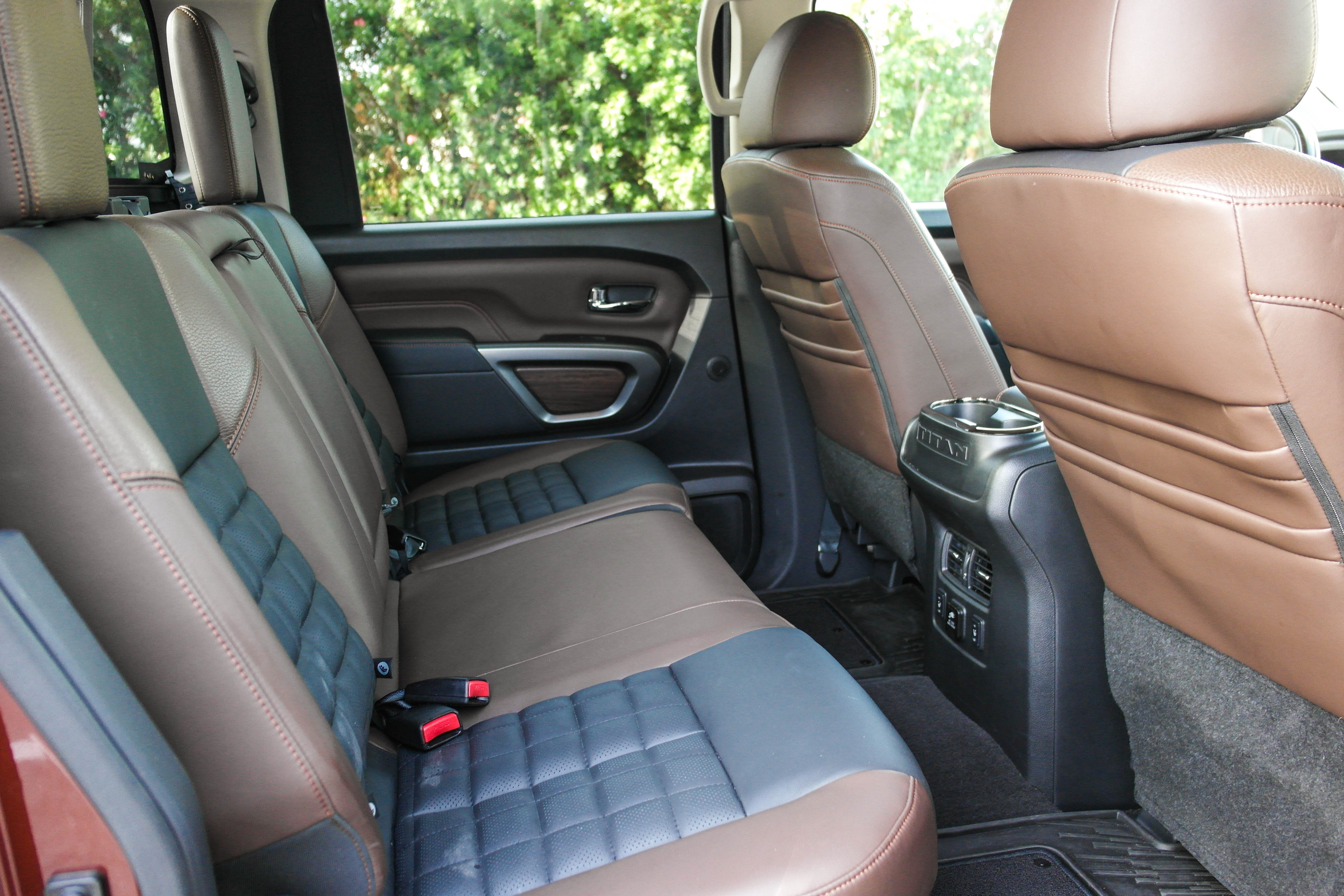 Nissan’s toe-dip into the ‘tweener class between half-tons and heavy-duties may prove to either be a prescient prediction of a segment to come, or a bridge-too-far attempt to create a market where none exists. Either way, this first effort is a valiant one, if a bit hard to justify at the $62,630 required of our tester. The Silverado 2500HD we tested a couple of years ago not only beats this truck’s capabilities, but does so for essentially the exact same money. The Titan’s Pro-4X and SL trim levels are also well-equipped and knock between five and ten grand off this Platinum Reserve’s sticker price, making the XD and its stout, almost-an-HD underpinnings a much friendlier proposition. 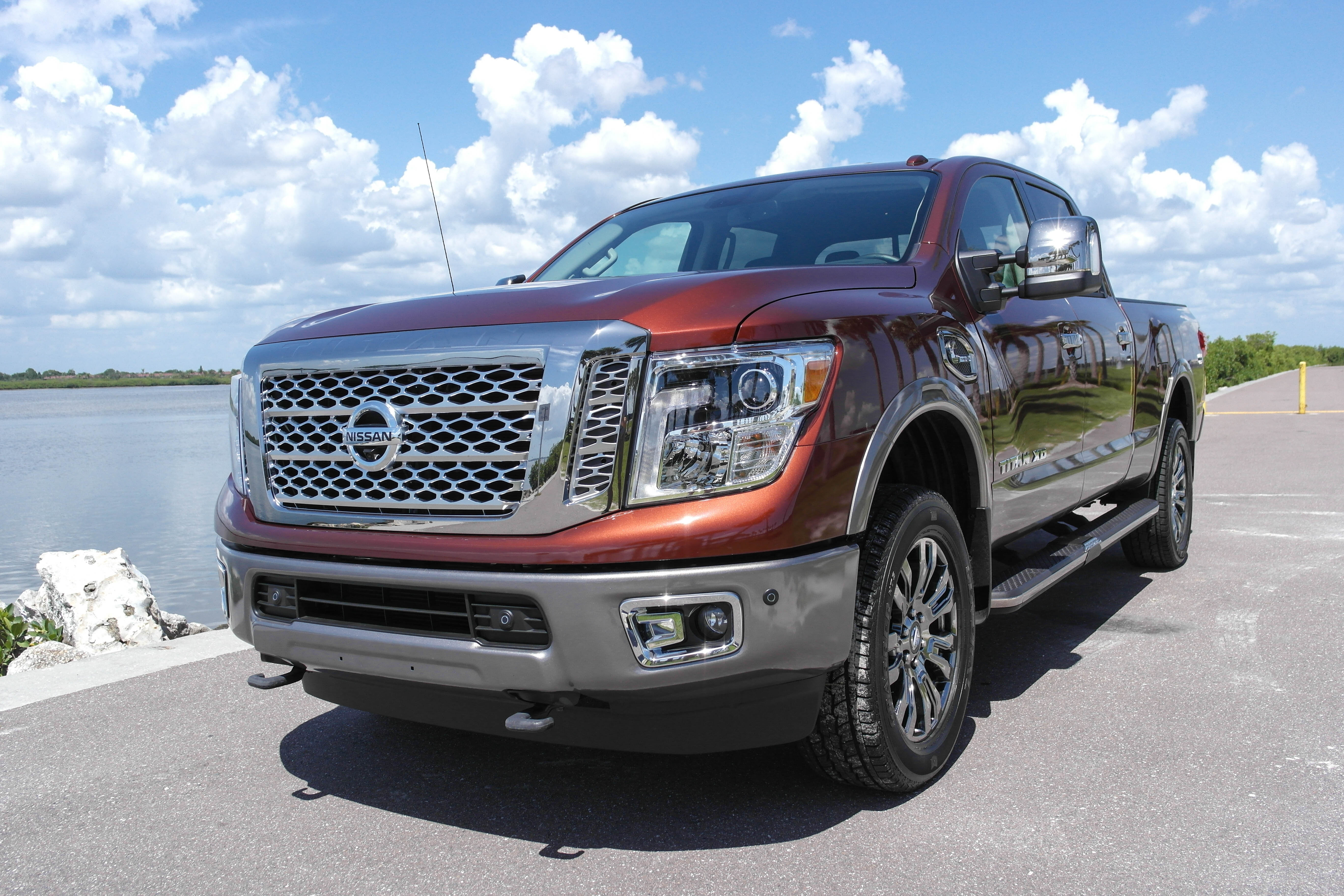 Jack of all trades, master of none, the Titan XD does one thing exceptionally well: being massive. For those few pickup buyers who wish to split the difference between the merely full-size and the truly heavy-duty, the Titan makes a willing compromise. However, more polished domestic competition exists at the price point of our loaded tester.