You’ve got to give it to Fiat – it takes chutzpah to take on the entry-level sports car segment, one fraught with dwindling historical sales and fickle buyers that tend to chase the latest shiny new metal. Perhaps it was this bleak category outlook that prompted them to reach out to Mazda with a partnership idea. The 124 Spider that you see before you is the product that resulted, and it’s quite special. 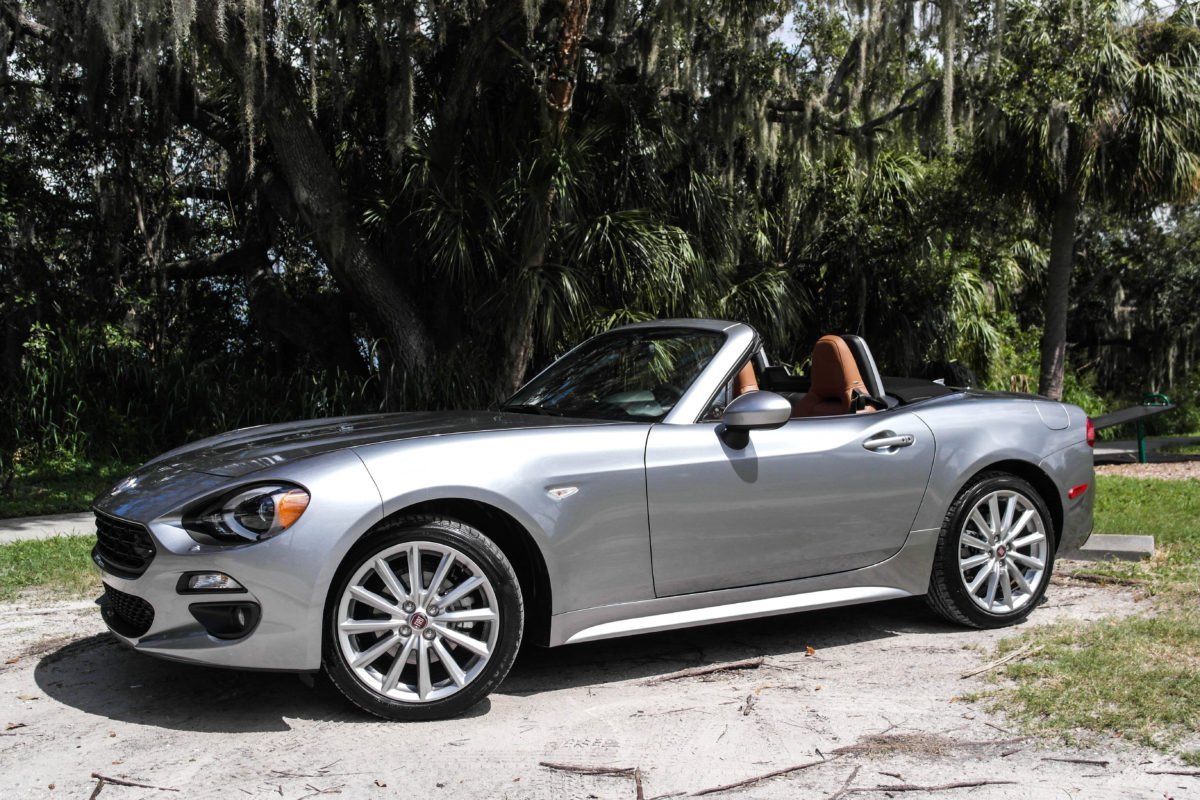 With design elements – most of them successful – lifted from the classic Spider of the 1970s, a car that is perhaps the most positive association buyers in this country will have with the brand, the Fiat certainly doesn’t wear its Japanese underpinnings on the surface. The details are decidedly Italian, though the longer overhangs and blunter front end conspire to make the overall look far more polarizing than the tidy MX-5. I’m not the biggest fan of the aesthetic, but it certainly draws attention, and that counts for something. Bystanders seem to love the thing. 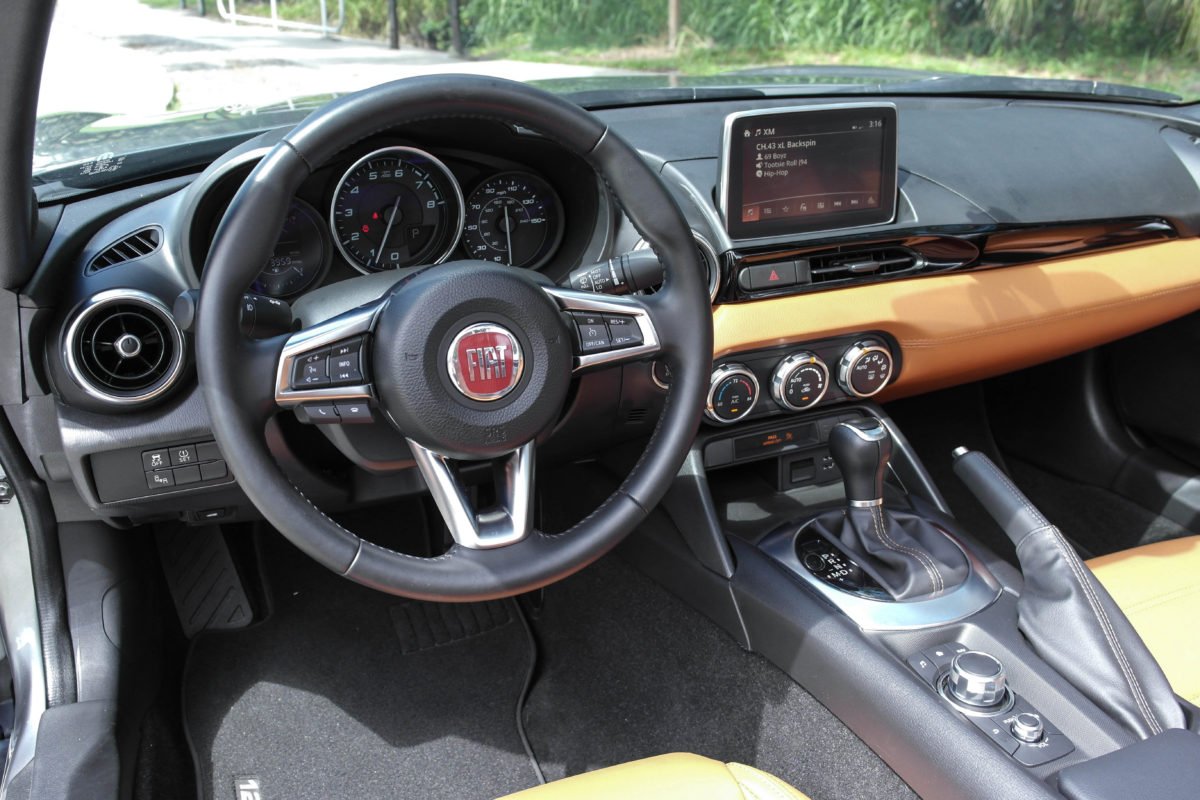 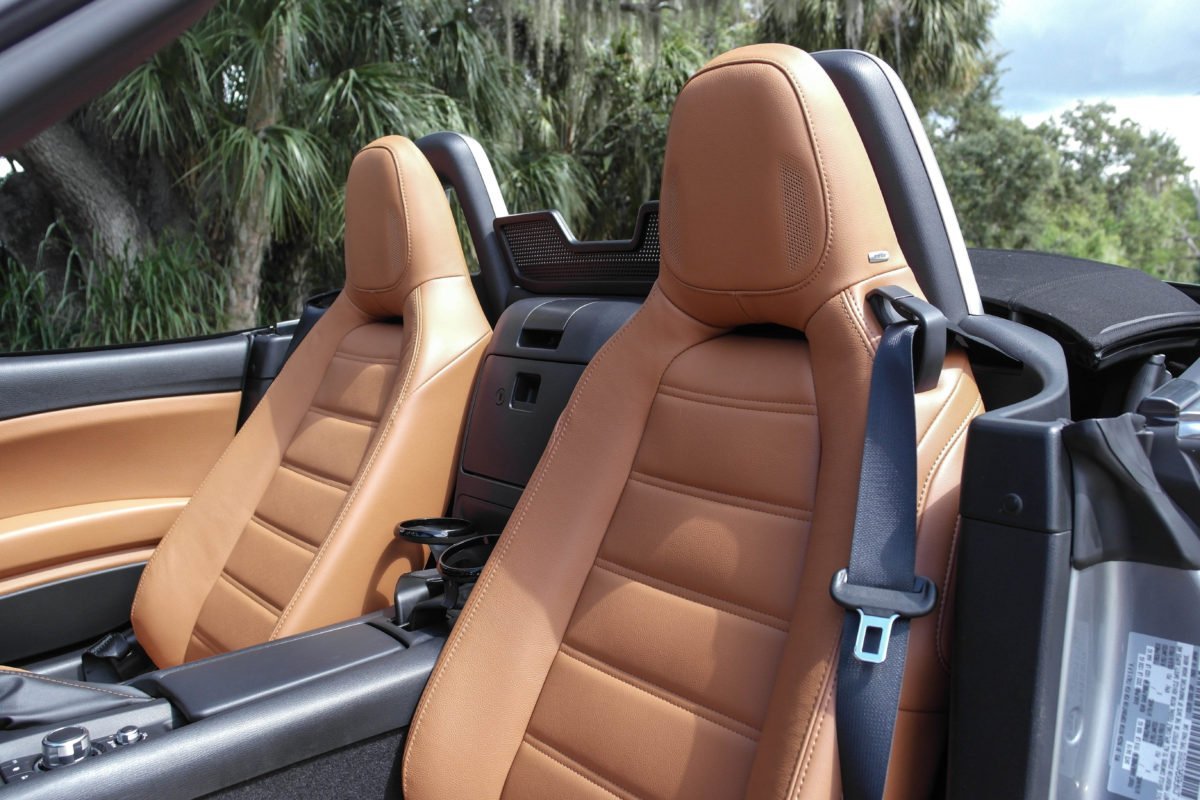 The interior, though carried over largely intact from the Mazda, feels sufficiently different through clever use of more upscale trim materials and lashings of color here and there, which makes it a more pleasant and interesting place to pass miles in than the Miata. What hasn’t changed in the Fiat is the unfiltered level of road noise with the top up; the quest to pare ounces from every corner means there’s not much in the way of sound deadening on board, even though it carries slightly more of the stuff than the Mazda.

The solution would normally be to pop back the manual top, which is a delightfully simple single-motion affair that takes all of three seconds to execute and makes you wonder why every convertible builder doesn’t do it this way. But when the weather doesn’t permit such a remedy (and Hurricane Hermine ensured my week with the car was spent mostly under roof), you’ll just need to crank up the stereo, grin and bear it. It’s not as cacophonous in here as some other soft-tops – the 370Z Roadster actually springs to mind as being even noisier – but clearly, those expecting hushed conversation levels at highway speeds will need to look elsewhere. 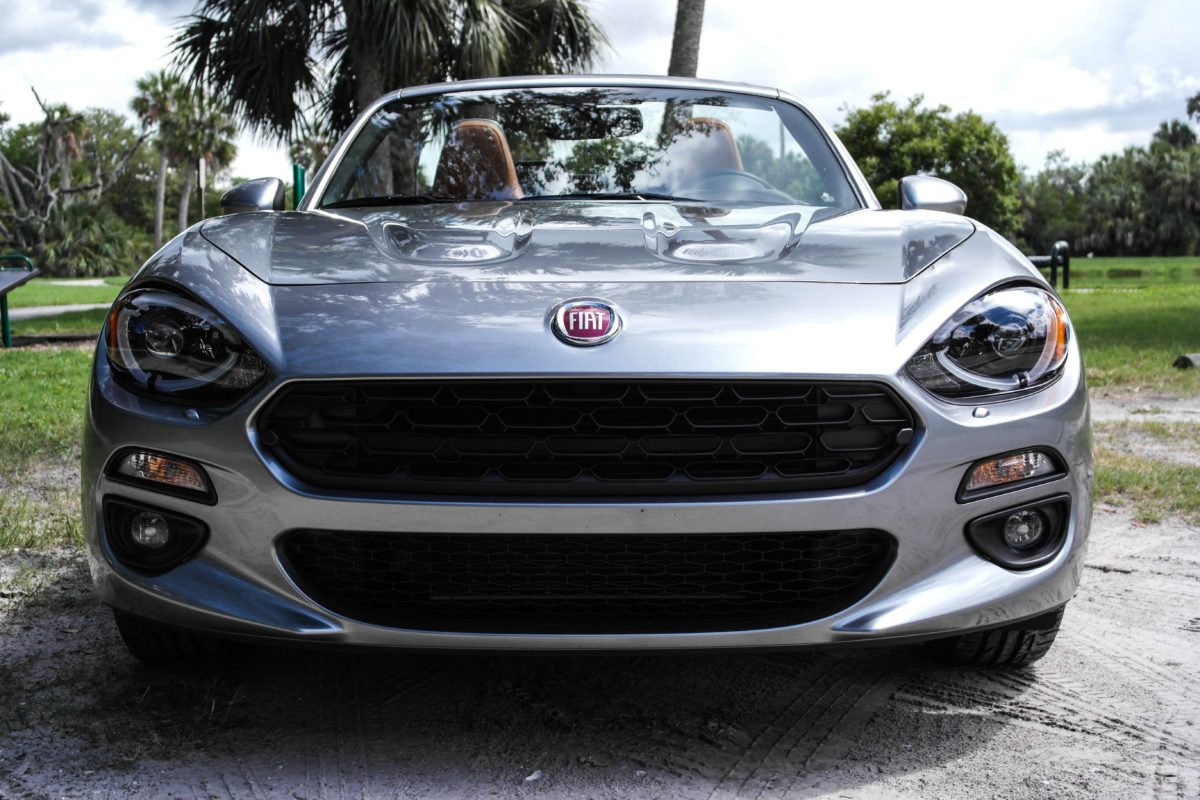 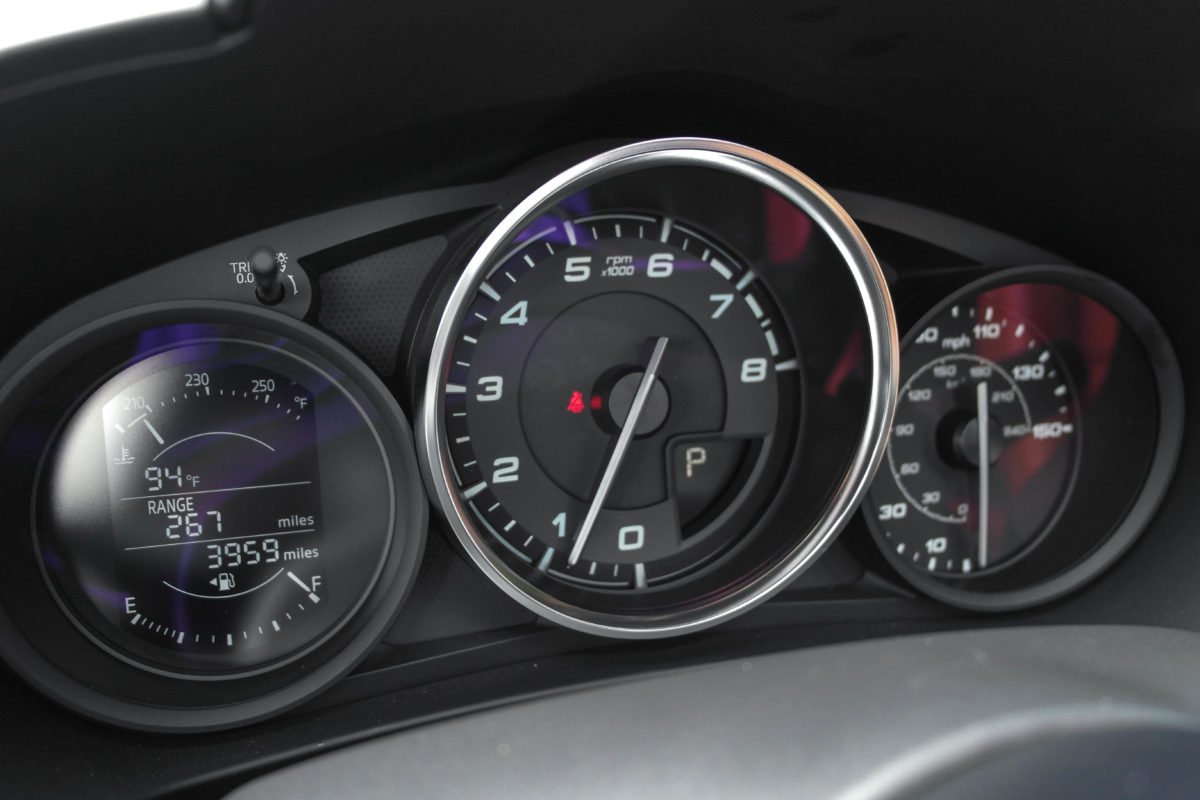 With that foible out of the way, let’s talk about the 124 Spider’s real draw: its chassis. The translation of Japanese to Italian has thankfully left the Miata’s poetic handling intact. The Fiat exhibits the same neutrality and eagerness to turn in as its Mazda sister, while maintaining a subdued ride quality. The steering, though perhaps not a paradigm of feedback, is about as honest of feel and speed as one can reasonably expect for less than $60 grand in the electrically-assisted age we live in. 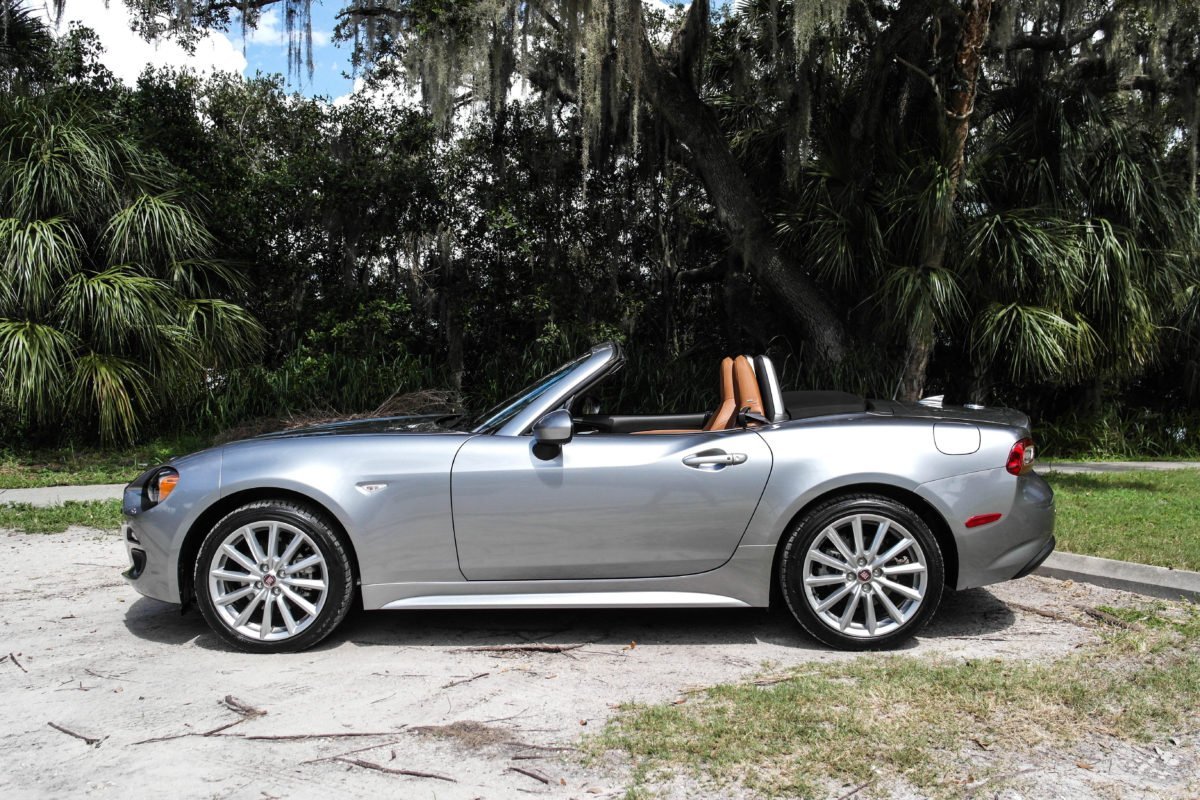 Our Lusso tester, the “luxury” trim level within the 124 Spider lineup, rode on 205/45-17 Bridgestone Potenza S001 summer tires, which are the same size as the sportier Abarth’s rubber but not quite as sticky (that model rides on RE-050As). Despite a relatively small footprint, I never found the Lusso to be wanting for grip; even in the rain, the 124 Spider felt at all times safe and predictable, and only a deliberate right foot will cause the stability control to chatter. Of course, turning it off altogether remains the most entertaining option. 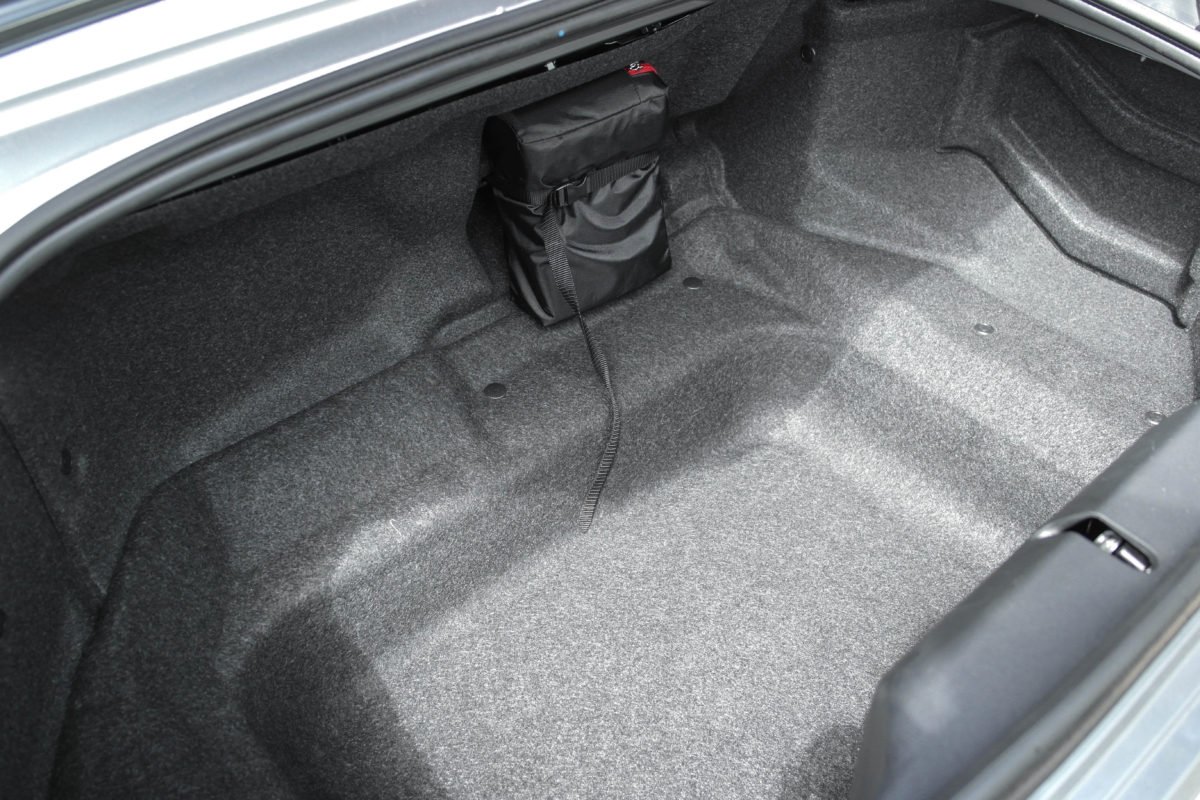 When you desire more rotation, it’s dialed in telepathically, as if your firing synapses were controlling the slip angle manually. It’s a brilliant thing to casually hustle down a back road, and if there’s the same level of body roll as there is in the Mazda, I didn’t notice it. Of course, you don’t notice it in the MX-5, either; it’s simply too much fun. The brakes are transparent in nature, in that they haul the car down from speed adequately and do so through a well-judged, linear pedal. About the best you could hope for with a street car’s brakes, honestly. All Spider trims feature the same 11-inch front and rear rotors and sliding calipers, though choosing the Abarth opens up availability for a Brembo front caliper upgrade that would be advisable if you plan on tracking the car. Otherwise, they’re mostly eye candy. 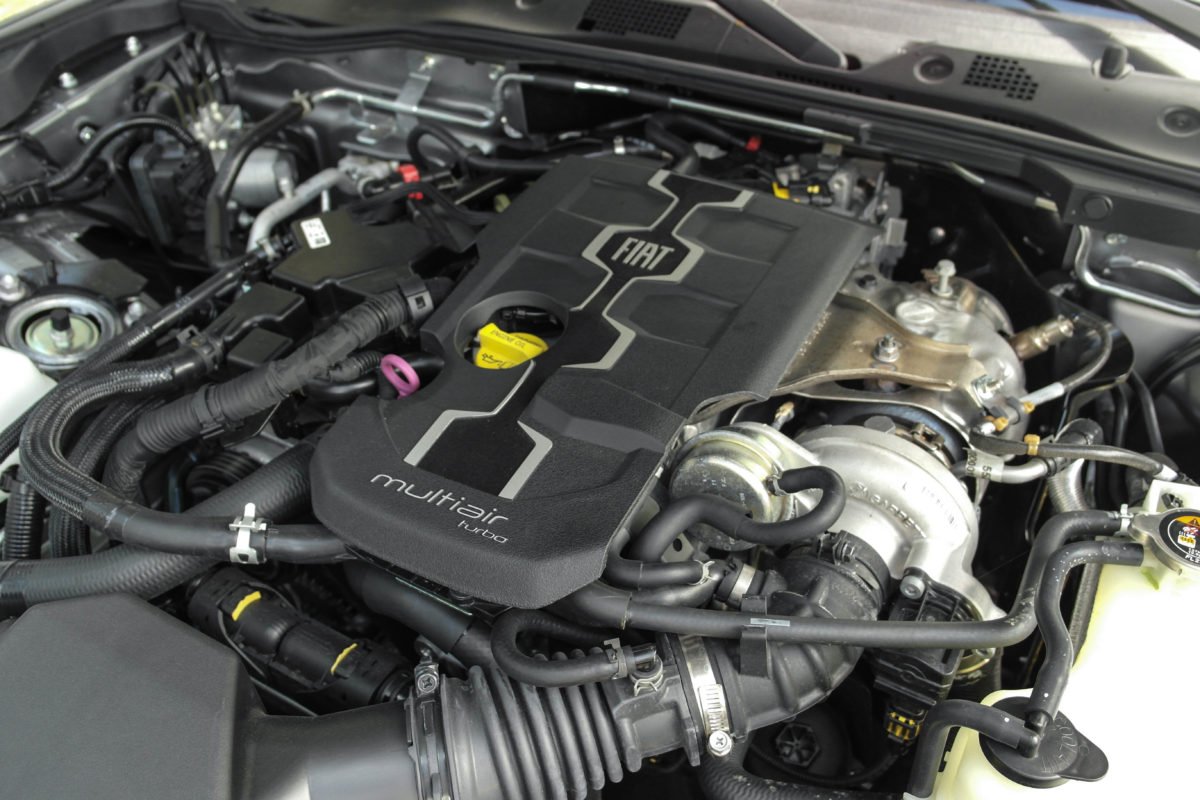 More so than even the styling, the most divisive element of Fiat’s interpretation of the Hiroshima hometown hero has got to be the engine. The 1.4-liter MultiAir unit seen elsewhere in Fiat’s lineup is called on for duty here, puffing out 22 psi and 160 horsepower (164 in the Abarth, courtesy of a freer-flowing exhaust). That’s nominally more than the Mazda’s 155, but the figures are so close as to be splitting hairs. The real difference, on paper anyway, is in the torque output. 184 lb-ft from 3,200 rpm in the Fiat plays just 148 at 4,600 rpm in the Mazda. As a result, you’d expect the Fiat to feel usefully quicker around town than the Mazda, but since it’s a low-compression, small-displacement mill, the 1.4-liter can be caught with its pants down when full thrust is summoned south of 3,000 revs. Keeping the revs up would normally solve the problem, but the Miata rewards its driver more for doing so, and remains good to the last drop – all the way to redline. The Fiat’s urgency tapers off after 5,500 or so. 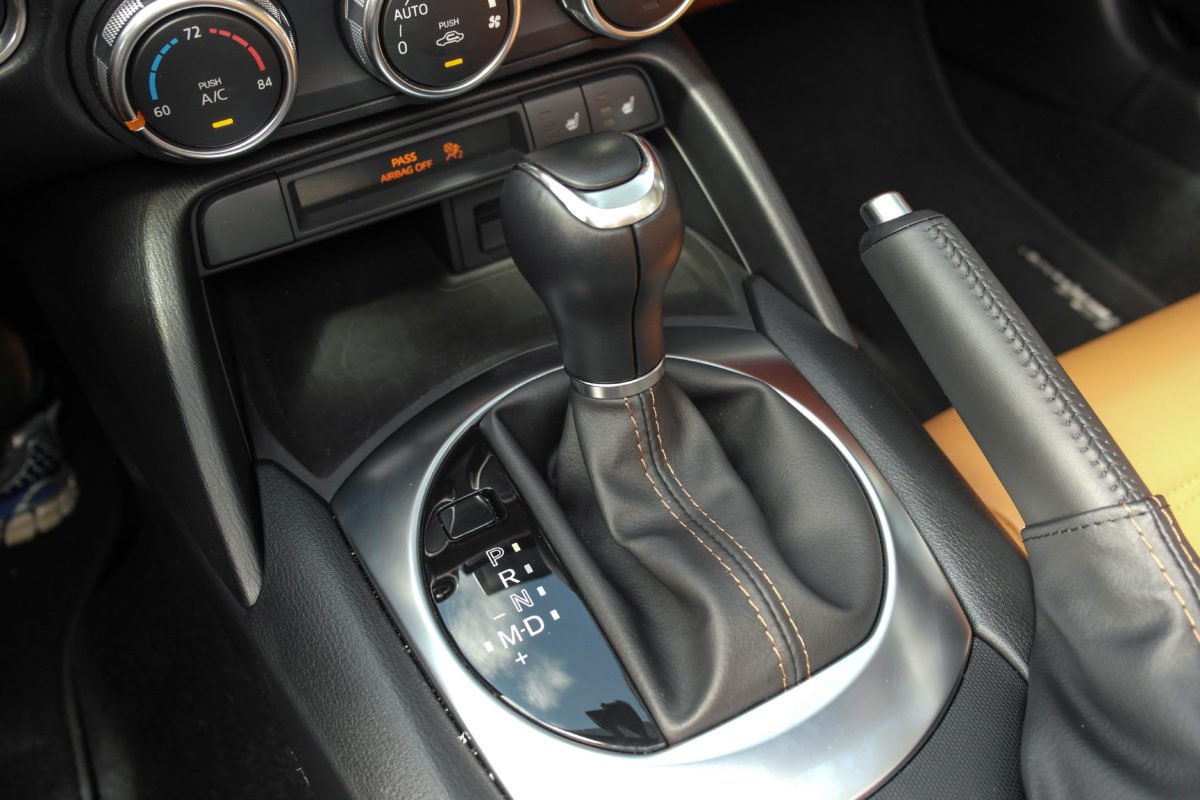 Our tester’s six-speed Aisin automatic (a six-speed manual is standard equipment across all trims) was quick-witted enough to keep the MulitAir sufficiently on the boil, but those going into the experience hoping for the kind of lazy low-down torque that many modern, larger turbo mills have been tuned to provide will probably be disappointed that there’s no more outright speed available in the Fiat* compared to the Mazda. That asterisk is placed there because I should qualify that last statement with the note “from the factory”. That’s an important one, because if the Miata has taught us anything, it’s that the buyer base for these cars apparently love to tinker with them. 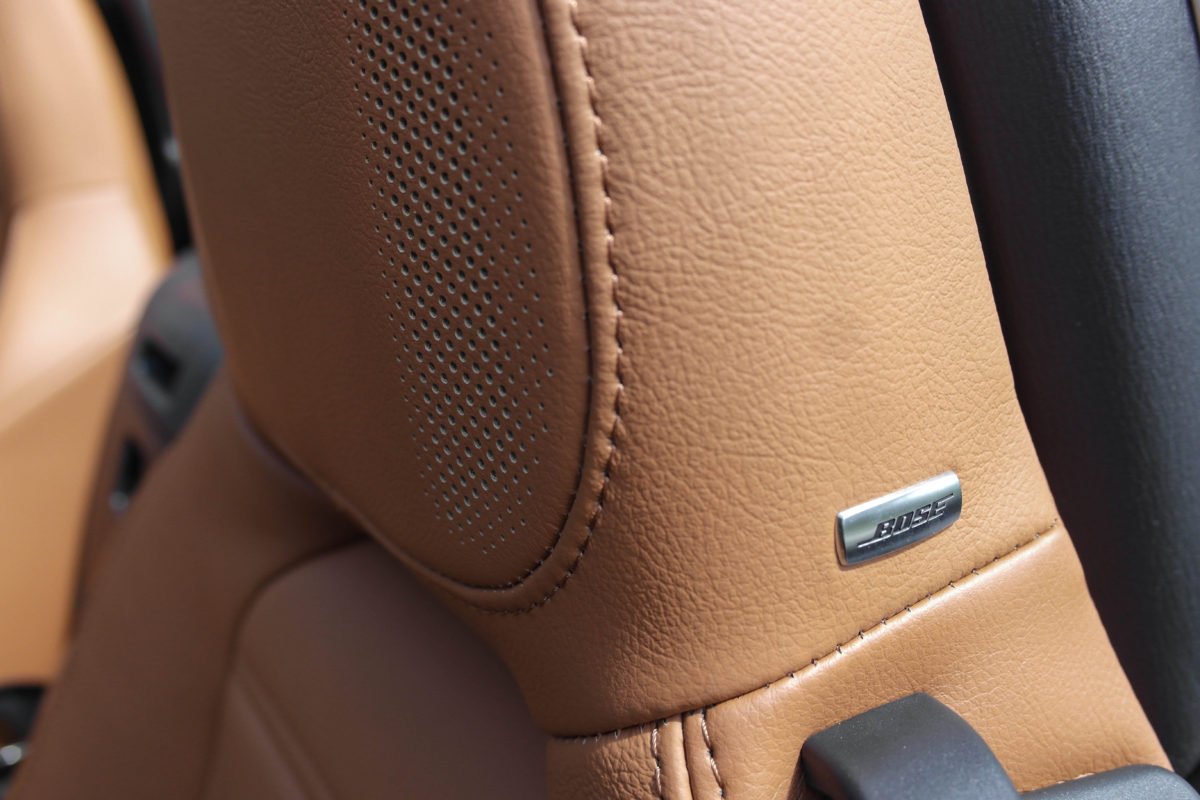 If engine tuning is in the cards, you owe it to yourself to consider the Fiat. While an MX-5 might gain a handful of ponies through better breathing in the aftermarket, it really takes forced induction or a pricey engine swap to extract meaningfully more power from the Miata. It’s a safe bet that the MultiAir will respond more favorably to engine remaps and intake/exhaust upgrades. It’s also reasonable to expect that 200 crank horsepower will be within reach for just a couple grand once tuners start getting their hands on these, and that’s an important consideration for someone who intends to buy a car and play with it. 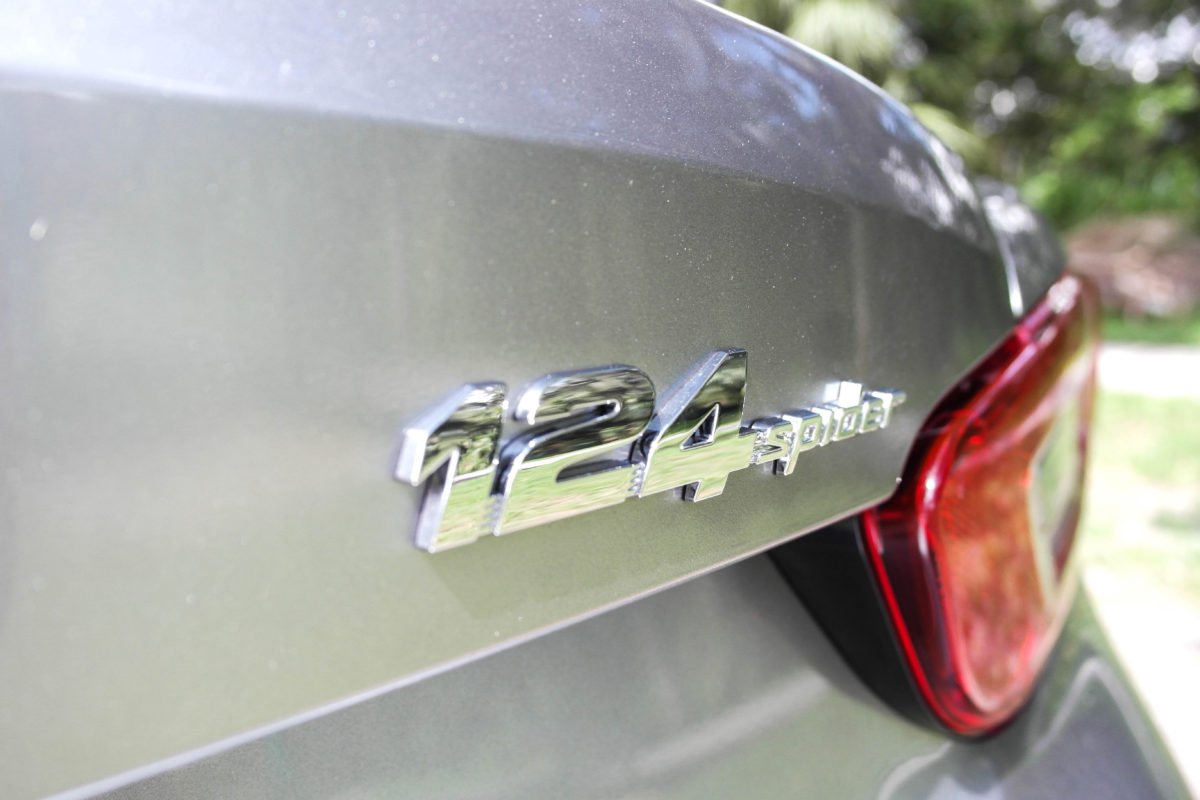 If the temptation of easy turbocharged power or the retro vibe are enough to sway you toward the Fiat instead of the Mazda, there then comes the question of which 124 Spider to choose. Our loaded Lusso tester still rang the cash register for less than $34 grand, which is solid value for money despite its diminutive stature. The base “Classica” opens at just $25,990 and is tempting simply for the fact that it offers almost all of the style of the up-level models, as well as the performance, for not a whole lot of money. But then again, the stylish interior touches that differentiate the 124 Spider from the Miata require a step up to the Lusso. If you or your significant other possess even a hint of vanity, it might be worth the extra outlay to secure the Lusso’s leather seats and wider range of trim and convenience options. 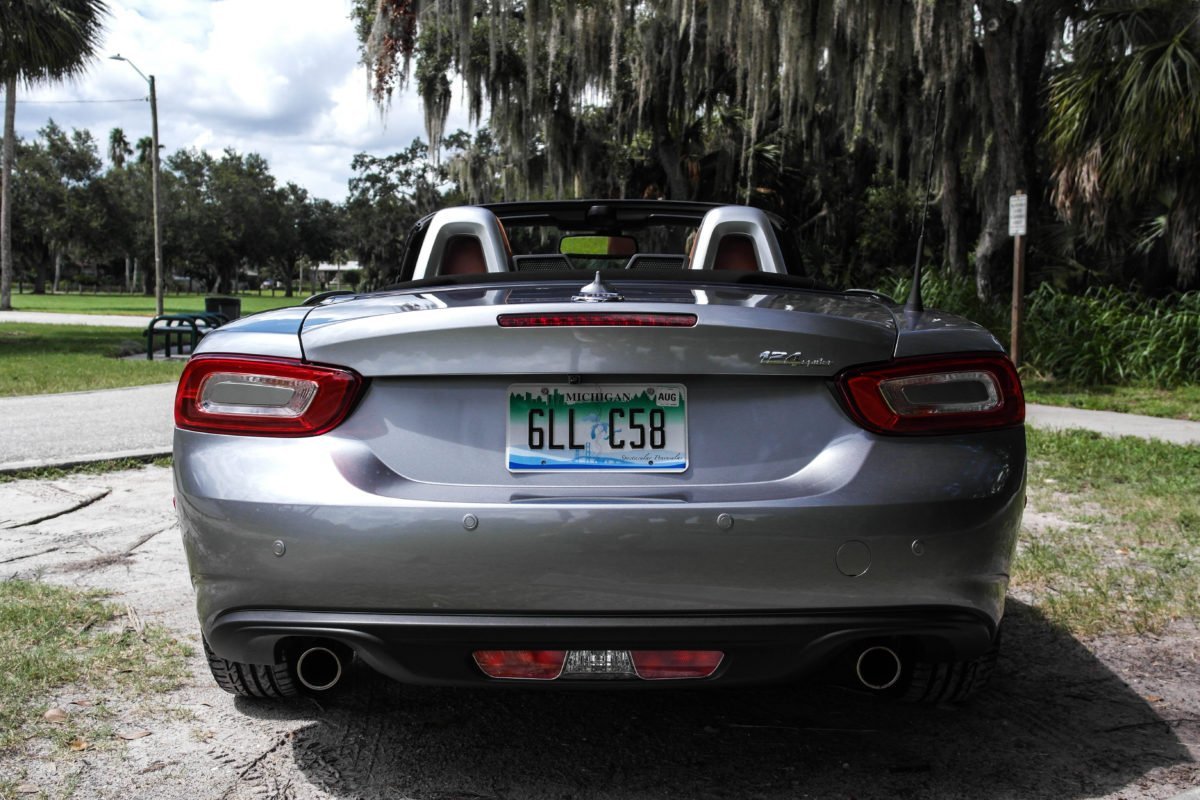 The Abarth, meanwhile, occupies the sportier end of the spectrum thanks to its gunmetal alloys wrapped in stickier tires, firmer suspension, a rortier exhaust note, paddle shifters for the available automatic, and crucially, a limited-slip differential. The aforementioned Brembo brake upgrade and a matte-finish black hood are options available only on the Abarth. It’s safe to say that enthusiasts will pass directly over the other two for the Abarth, and for good reason. However, the vast majority of buyers will be more than happy with either the Classica or the Lusso, depending on how strong is their own personal need to be pampered. 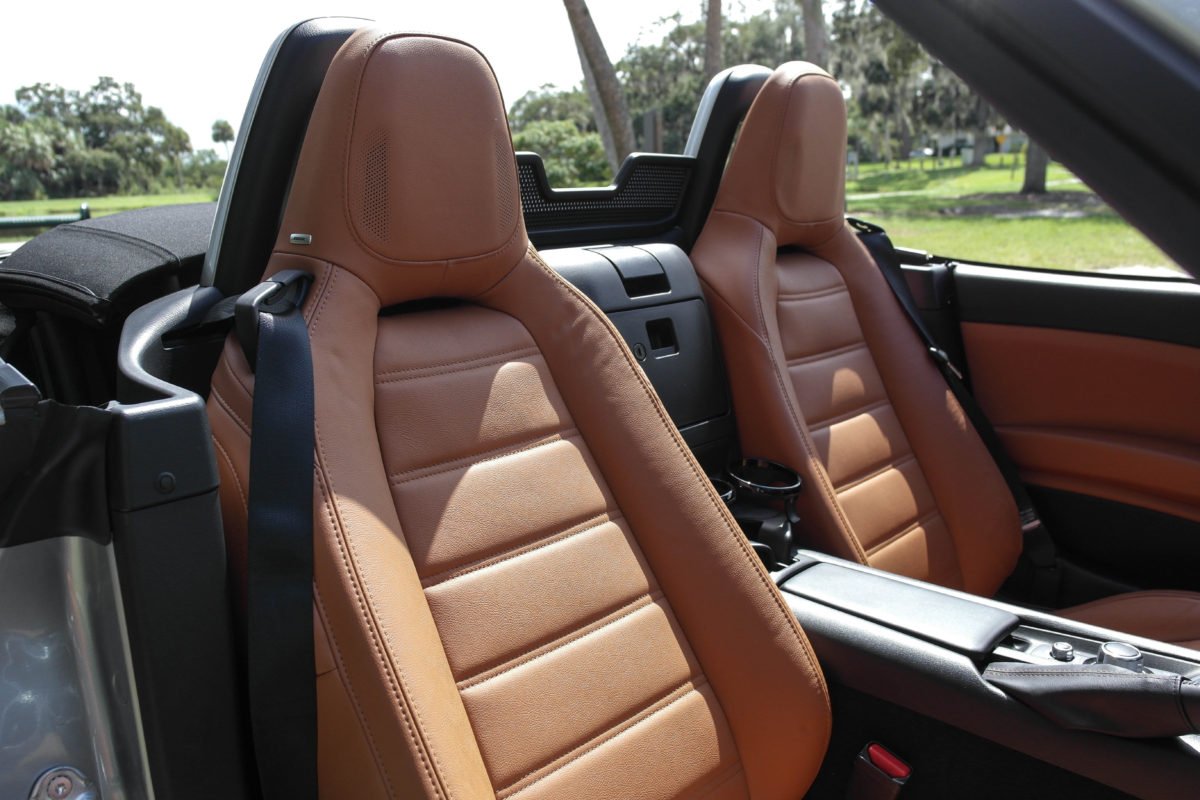 Whichever one fits the bill, there are few better ways to spend $30 grand automotively than in the MX-5 or 124 Spider. Personal preference will be the determining factor, but merely the presence of the Fiat’s endearing quirks will be enough to tempt many buyers into Italian showrooms.