I consider myself lucky to have driven a number of high-dollar sports cars during my relatively short time on this rock. I don’t say this to brag, even humbly, but merely to frame the forthcoming review as one hopefully grounded in reality. And when I say “high dollar”, I mean those in the $60,000 to $100,000 range. Which is certainly high dollar to me, and at two to three times the average new car transaction price, for most of the buying public, as well. But in the sports car world, it’s merely mid-range. Deep into six-figure territory (and beyond) lies nearly the entire Porsche 911 range, plus the McLarens, Ferraris, and Lamborghinis that are the stuff of car guy dreams. But there’s still a lot to be had in this middle ground of the merely expensive – witness the Corvette, M3/M4, Z4, Boxster/Cayman, Jaguar F-Type and Audi TTS (which I’ll be reviewing in a couple of weeks). And of course, the SLC43 seen here. 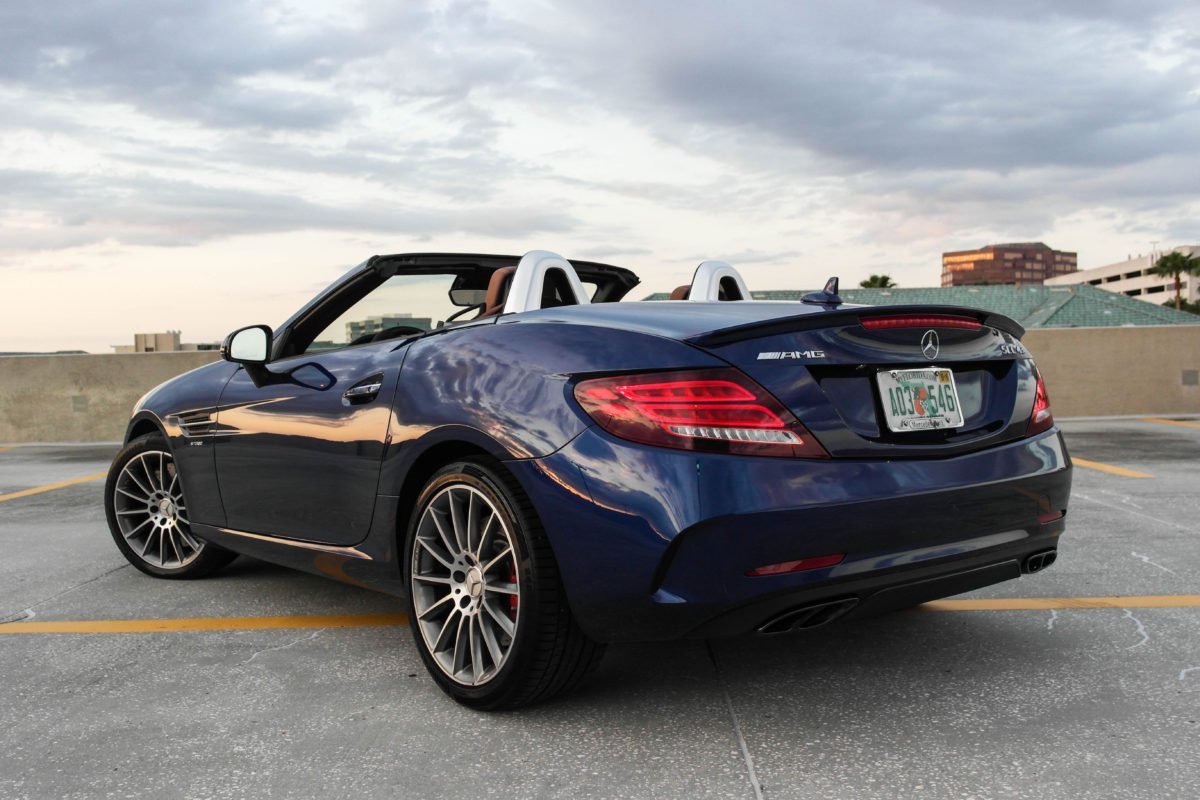 Heavily refreshed for 2017, it’s tempting to look past the SLC’s tightened styling and freshened interior and immediately bemoan the old SLK55’s loss of two cylinders and some ponies in its move to turbocharged power. But you’d be doing this new car a serious disservice – even though the proportions still lean toward the dainty end of the spectrum, the baby-AMG-GT styling makes for a convincing update over the last car. The last model’s blockier front end has given way to a softer, rounder beak, and slimmer light treatments at the rear tie the two ends together more cohesively. In between, a hardtop featuring Mercedes’ signature Magic Sky Control glass panel is available to turn day into dusk at the touch of a button. 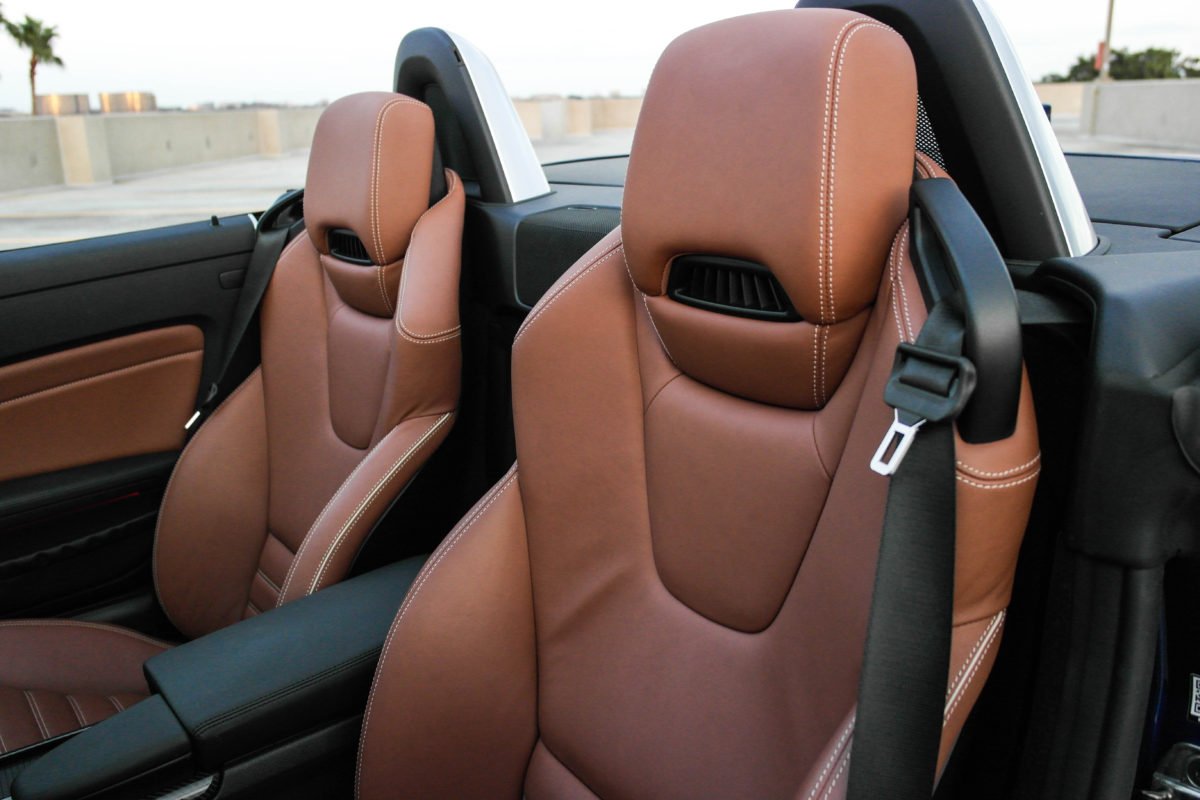 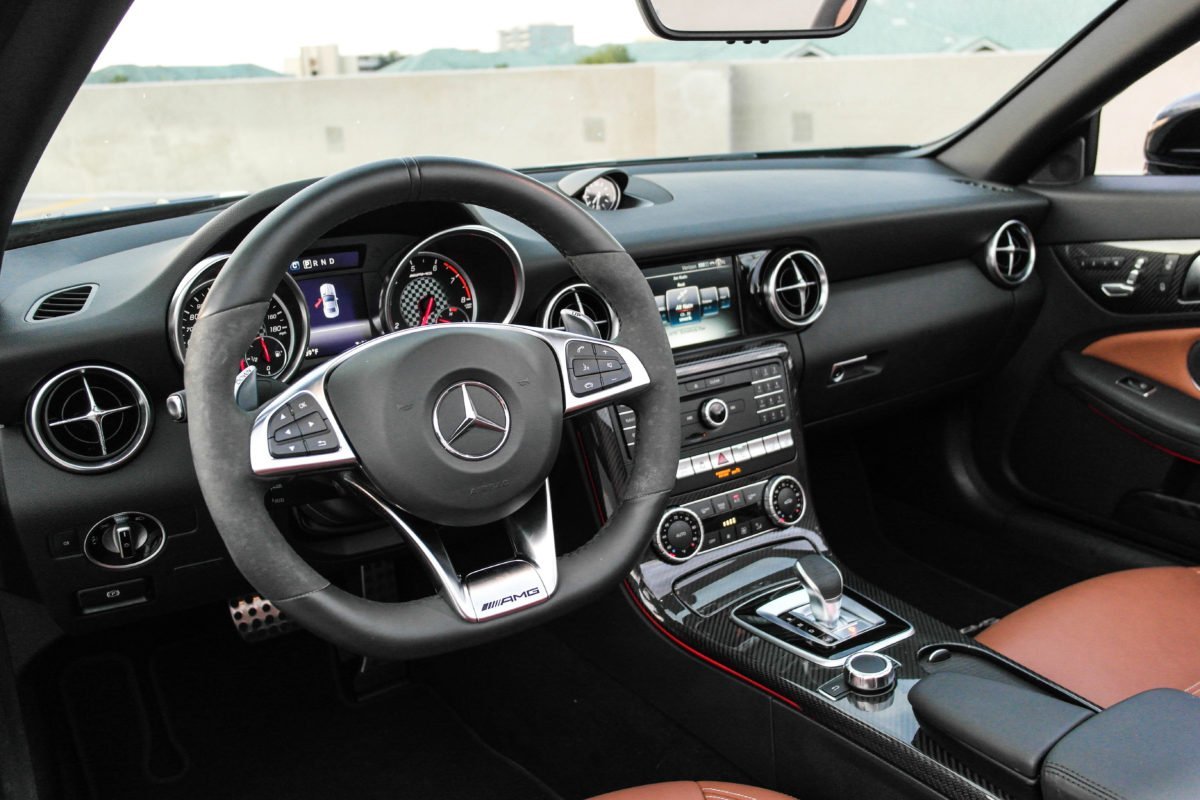 The interior has received a similar nip and tuck treatment. A new instrument cluster with a 4.5” multicolor display between the main gauges, as well as a new infotainment display and upgraded materials all around lift the layout in a convincing mid-cycle refresh. The optional carbon dash trim of our tester, despite ringing in at $1,750, is gorgeous enough to make a strong case for itself and provides a nice contrast against this car’s peanut-butter-hued leather. Although the cabin is a bit snug for drivers (and especially passengers) over 6 feet, everything is at least laid out logically and bolted together with care. Though legroom is tight, headroom beneath the opacity-shifting roof is quite good, and even better with the hardtop stowed. Trunk space with the roof up is decent, although with the movable partition in place, you may need to pack creatively. 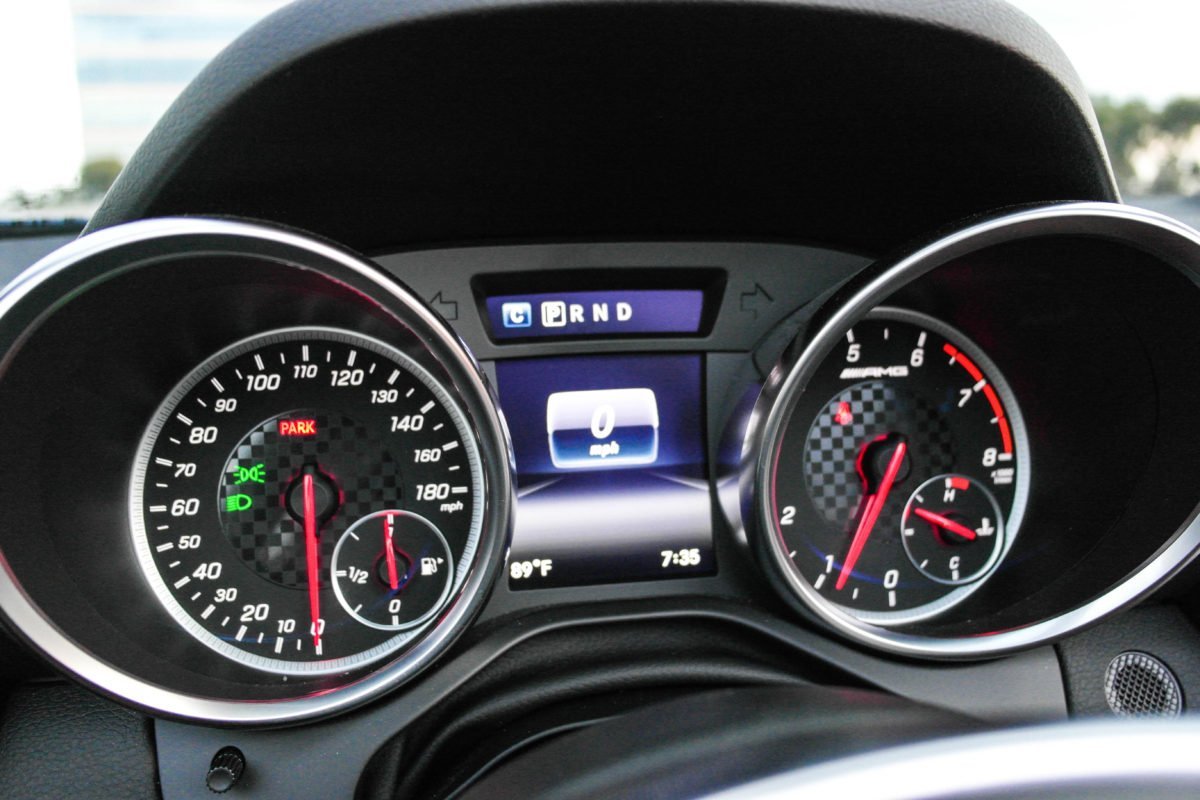 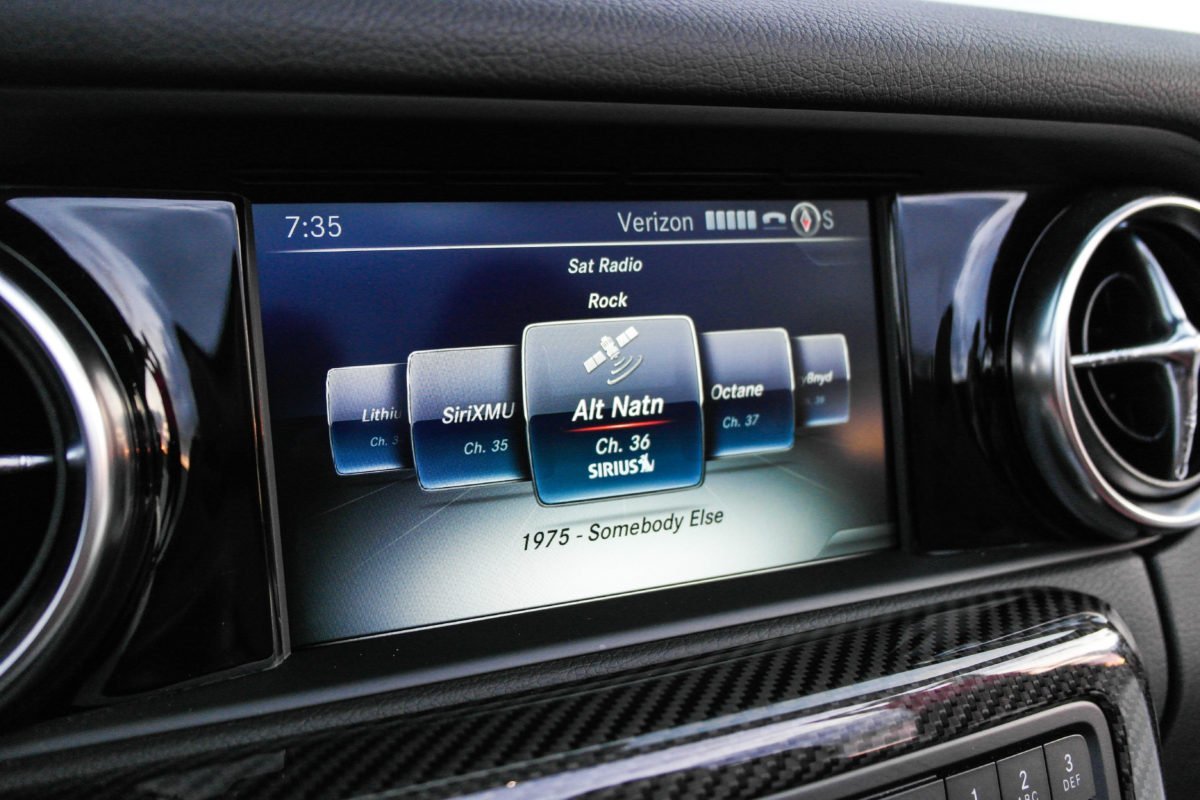 Aesthetics may do much of the heavy lifting when it comes to sports car sales, but the only question we really care about is, how does it drive? The SLK55 this car replaces was a flawed-but-lovable mashup of German muscle car and delicate roadster. From the standpoint of size and looks, it hewed closer to the latter description, but in terms of character, the AMG was a muscle car through and through. With a burly 5.5-liter naturally-aspirated V8 shoehorned under its abbreviated snout, the weight balance was decidedly front-biased, and thus, its handling wasn’t as pure as a Boxster’s or as stable as a Corvette’s. But it positively dripped with character, and the noise – oh my, the noise. Emitting a hard-edged bellow under full throttle, the AMG mill took a page from the classic big-block V8 American playbook but sounded even more technical in nature. 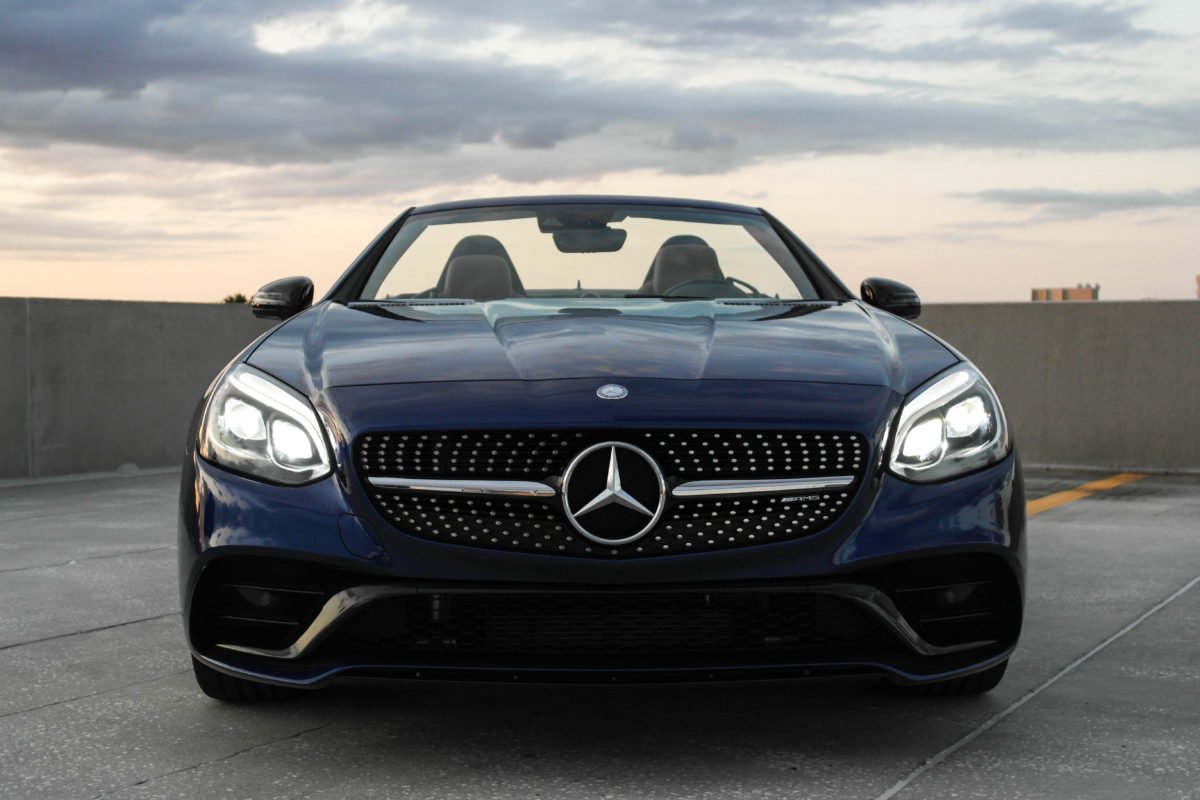 Yet as much as we may pine for the naturally-aspirated V8, its days are certainly numbered. And in the case of the babiest SL, they’re gone altogether. So what do we have instead? Well, it’s not hand-built by AMG-suited craftsmen in a German workshop. Rather, it’s a 3.0-liter V6 that also sees duty across a range of sedans and utility vehicles. Heresy? Perhaps. But it does have two turbochargers to liven the mood, and it weighs less than the outgoing V8 to boot, so with fewer pounds over the nose it should handle better as well. The new powerplant pushes out 362 horsepower and 384 pound-feet, so it’s certainly no slouch, and it carries the SLC43’s 3,541 pounds around with ease. Mercedes-Benz estimates it’s only a tenth of a second slower to 60 MPH than the old car, despite being down 53 horsepower, thanks to an advanced new 9-speed automatic and a drop in curb weight. 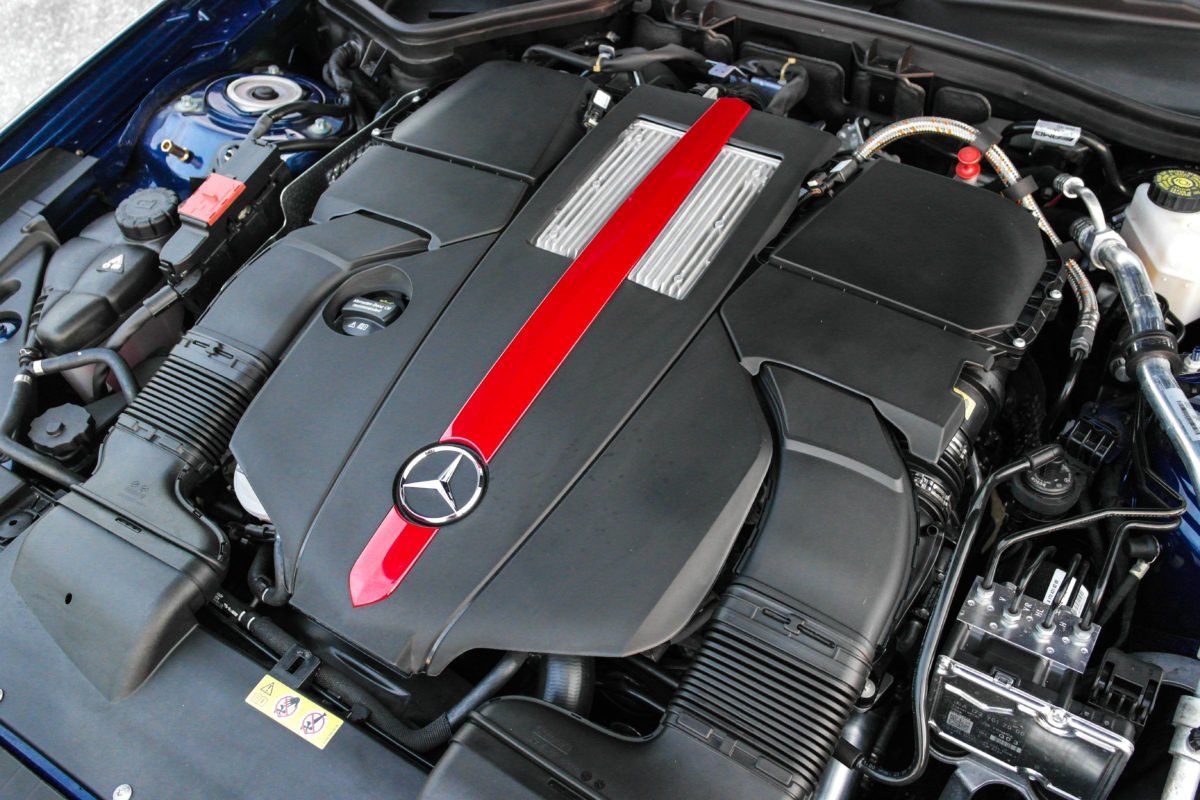 Smooth from the word go, the 3.0 V6 goes about its business with an energetic growl, and thankfully there’s no auto-tune software helping out the SLC’s voice – aside from a few movable flaps, the exhaust system dispenses with the piped-in speaker trickery so common in modern sporting vehicles. Boost comes on low in the rev range and builds naturally, exhibiting the character of a large-displacement mill more  than a turbocharged unit, which is often the promise with switch-ups like these but rarely the practice. The biturbo mill feels genuinely potent, and though the exhaust’s volume in sport mode can sometimes be a bit too attention-grabbing for daily commuting, when you’re in the mood it sounds great. Throttle response is excellent for a turbocharged unit, and outright pace leaves little to be desired. With a good getaway, I see no reason why the SLC43 wouldn’t pull mid 12s in the quarter mile and low 4s to sixty. It’s quick. 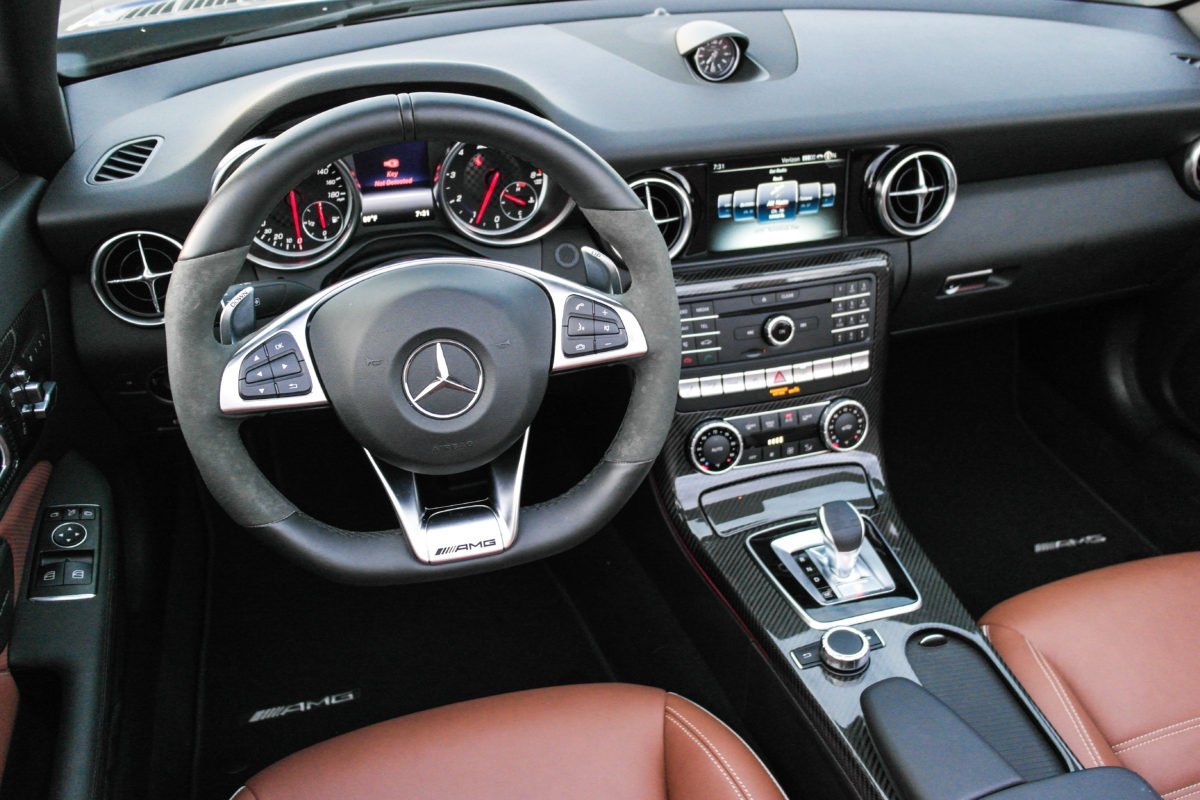 This potency is due in no small part to the new gearbox. Known as 9G-Tronic in Benz-speak, it’s a torque converter unit that shifts nearly as swiftly in manual mode as a dual-clutch, although around town, the difference in refinement is palpable. The 9G-Tronic handles low-speed engagements with the best of them, with no lurching or untoward movements allowed. Standard aluminum shift paddle shifters behind the wheel fall readily to hand and snap off requests quickly. The steering wheel itself, a flat-bottom, leather-and-microsuede wrapped piece, feels pleasantly chunky in hand. 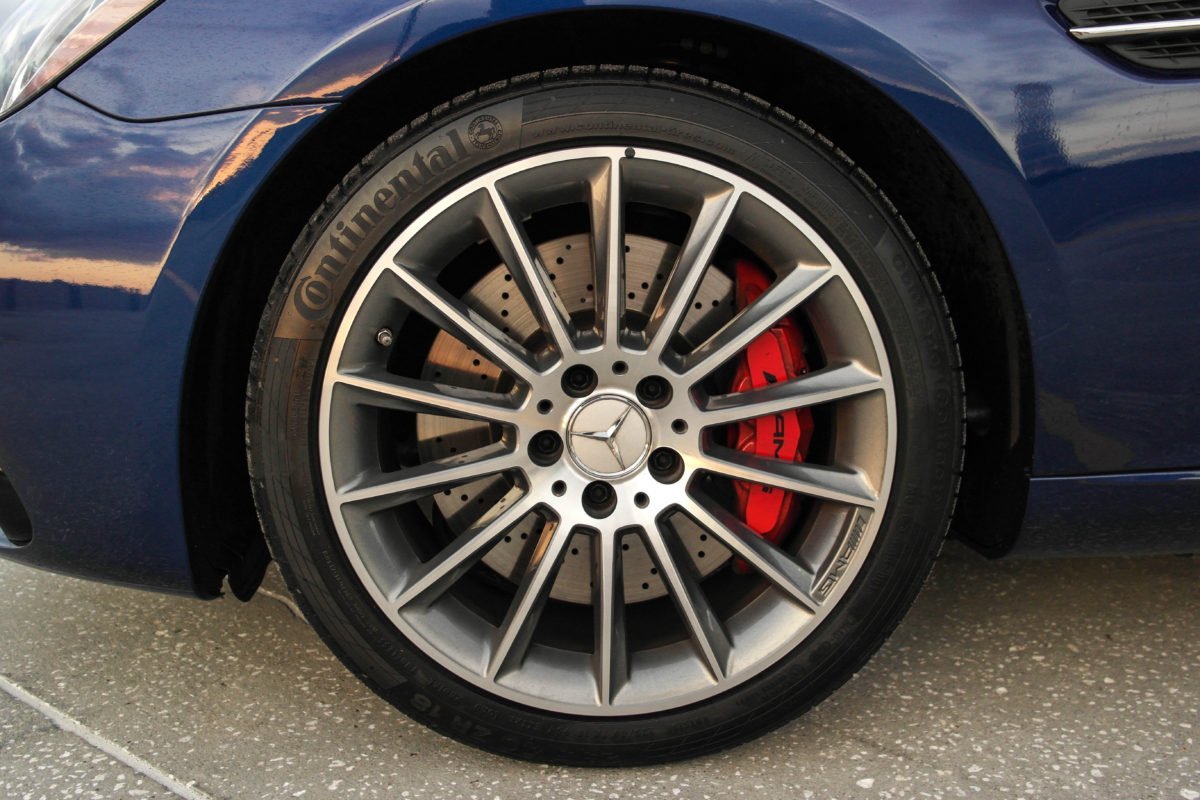 Handling was once something that you could clearly tell AMG considered secondary to its legendary powerplants. These days, with the brilliant AMG GT S in their roster, it seems the brand has realized that the need for a composed, agile chassis is at least as important as a honking big engine, and that thinking has trickled down to the SLC. Though it’s not quite as natural or communicative as something like the Boxster, which stands at the head of its class, it’s certainly on par with competitors like the Jaguar F-Type and BMW Z4. Its compact dimensions and short wheelbase aid in turn-in, and overall agility is a strong suit. Body motions are kept firmly in check by a spring and damper combination that’s meaningfully stiffer than the run of the mill SLC300. An “AMG Handling Package” (our car was so equipped) brings one big handling upgrade, a mechanical limited-slip differential, as well as some other tinsel like red brake calipers and an IWC-branded clock on the dash – which, as I found out, is not easily removed. 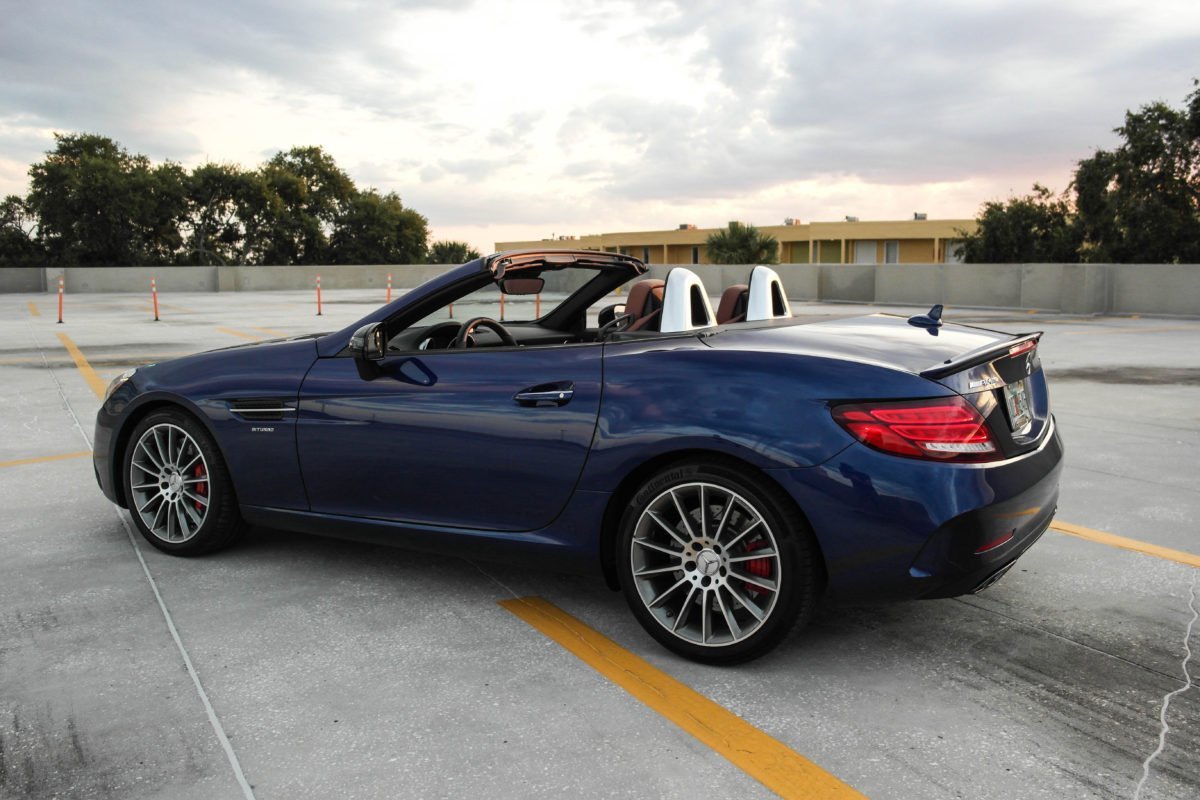 It all comes together as an unexpectedly gratifying package. The littlest Benz roadsters have typically been written off for not being quick enough, or engaging enough, or stylish enough to hold a candle to the best contemporary luxury sports cars in the business. Whether the newest SLC43 will change the minds of many Porsche, Corvette or Jaguar devotees remains to be seen, but for the shopper who simply wants the wind whipped quickly through his (or her) hair, as well as a dash of style, the SLC43 is more than up to the task. That it comes in a compact package, with a lovely interior and nicely rounded dynamics that do nothing to let the badge down, I say all the better.