If there’s one criticism that’s been consistently levelled at the pretty Audi 2+2 known as the TT, it’s that its genetic lineage isn’t as honed as that of its similarly priced competition. While that may sound harsh, or perhaps even a bit elitist, it’s true: the TT’s underpinnings are essentially shared with that of the humble VW Golf. A great econobox in its own right, but an econobox nonetheless. So how did that affect my enjoyment of the TTS pictured here? 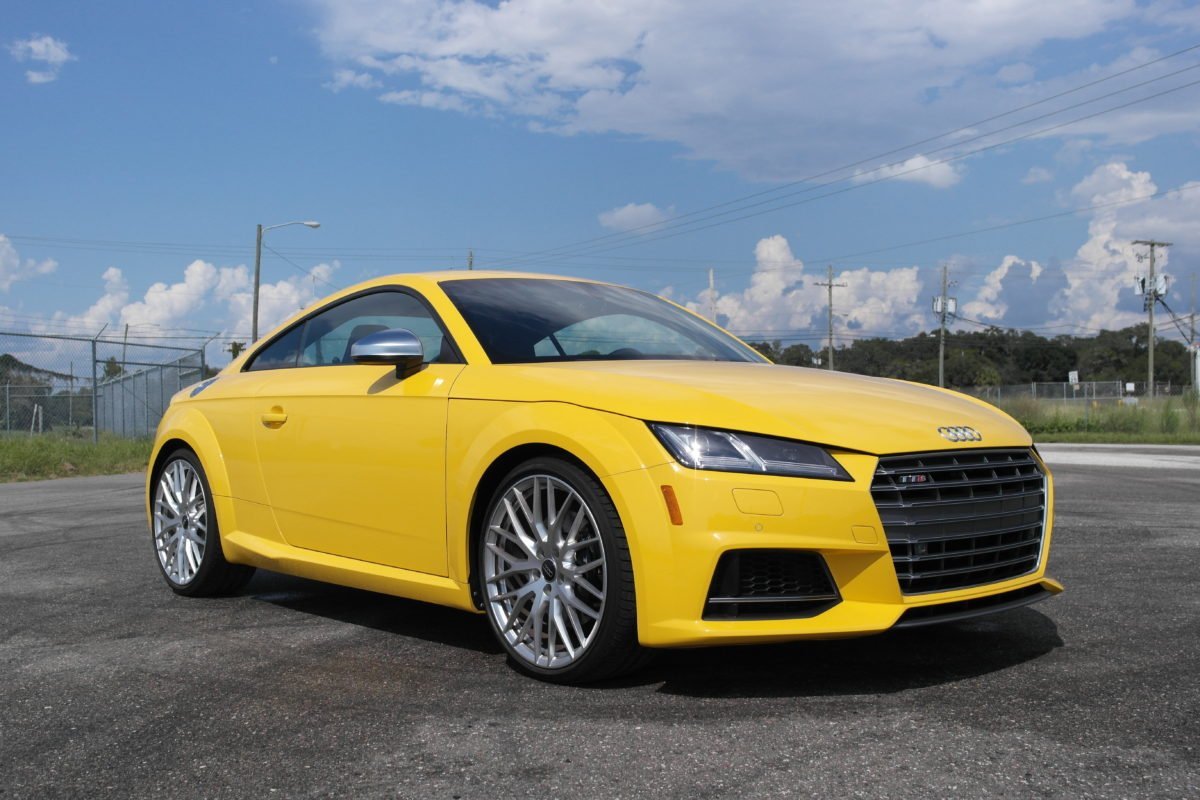 Not one iota. The reason is down to the fact that the TTS feels like its makers have finally come to terms with what it ought to be: an all-weather point-to-point sporty coupe draped in sexy sheetmetal. Sure, you could have this same basic package with more doors and for less money in Audi’s own S3 sedan. Or, you could be really “economical” and just plunk down $40 large for a Volkswagen Golf R, which also shares the same 2-liter, 292-horsepower turbocharged four and a 6-speed dual-clutch transmission that fires off shifts quicker than your synapses. The Golf can even be optioned with – rejoice! – a manual transmission, unavailable in either of the Audis. But to believe that the Golf R is essentially a taller, bulkier TTS with an extra $13 grand on the hood is to miss the point entirely.

The TT’s entire existence is predicated on the understanding that there’s a market out there that wants a sexier two-door wrapper, and is willing to pay to get it. BMW has exploited this formula well via scads of crossover, coupe, gran-coupe, sedan, wagon and GT model variants, all of which are essentially different shapes of the same thing. Think of it as the classic German “one sausage/three lengths” mentality, writ large by modern marketing and economies of scale. So sure, you could get a Golf or an A3 and have the same basic underpinnings as the TT (with a few parts differences here and there). But then you’d be just like everybody else driving a Golf or A3, and there are some among us that prefer to stand out from the herd.

The TTS’ pricing, meanwhile, falls right in the thick of what’s considered standard sports car territory these days. Starting at $52,450, the TTS lines up closely on paper with the mighty-mite BMW M2, but the two couldn’t be further apart in practice. If you’re willing to consider the TT’s rear hatch appendages as seats fit for human consumption, the Audi has an advantage over pretty much everything else in its class bar the littlest BMW sedan. The rest of the competition is limited to roadsters like the Mercedes-Benz SLC300, Porsche 718 Boxster (or Cayman), the BMW Z4 (recently deceased), the Alfa 4C and the Chevy Corvette. There’s also the 370Z, which can be had loaded to the brim for less than the TTS’ starting price, but the Nissan feels its age at this point and is nowhere near as refined. 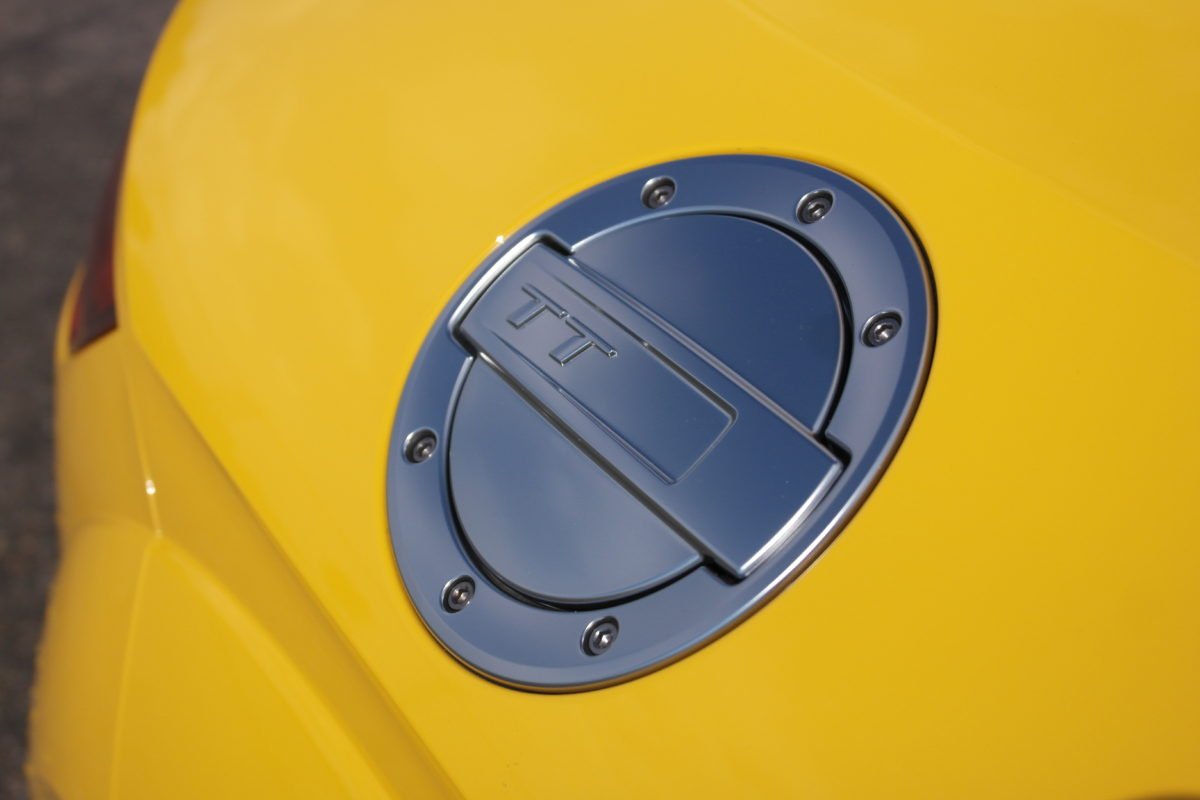 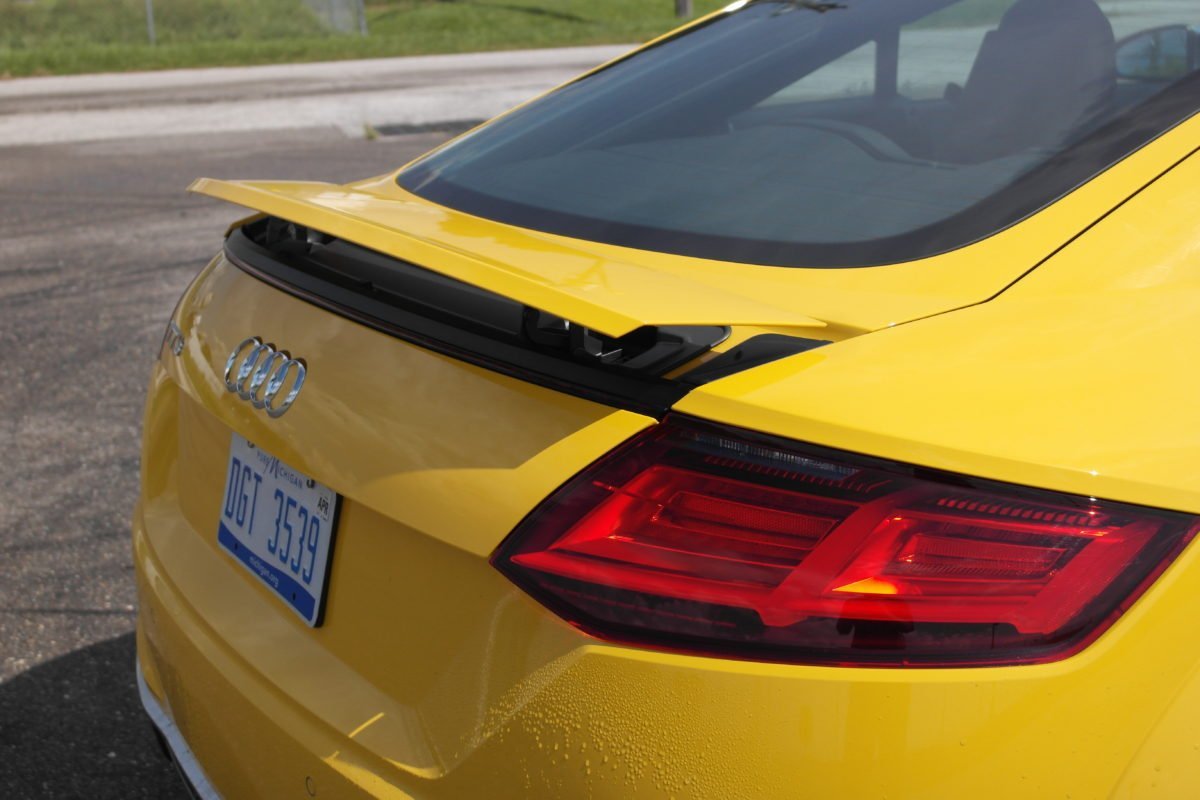 Even with all of these options on the table, it’s probably safe to say that in hardtop form, the TTS’ greatest competition comes from within the VW/Audi family. And for its price premium, the two-door does offer some pretty compelling advantages over its platform mates. First and foremost, there’s that styling. Square-jawed and wide-shouldered, the TT looks more than ever like the mini-R8 it always should have been. Though it’s less stylistically self-important than the design-study first gen, it’s far more interesting than the second generation car. Prodigious fender flares and a pronounced hood clamshell keep the familial TT styling traits alive, and aluminum-capped mirrors hint at the fast Audi, if not fastest Audi, status of the S variant within the lineup.

The TTS moves out with far more authority than its numbers would suggest. Quattro, launch control and four gumball Pirellis help the TTS claw its way to sixty in roughly four and a half seconds, which is mightily impressive for a 3,200-pound car with less than 300 horsepower. In Sport mode, the TTS will lunge for gaps in rush hour traffic with the slightest suggestion of right foot input, although in the default Normal setting, throttle inputs are blunted unnecessarily. In fact, when you’re not really getting up it, you could almost criticize this coupe for being too composed in the way it goes about its business. Those looking for a rip-snorting muscle car with a split personality might find the Audi a bit cold at first blush. Of course, the same could be said for nearly every fast Audi from the last decade, bar the R8 and the slightly-unhinged TT RS. Hopefully, the newest TT RS restores some of that menacing character when it arrives next year with a full 400 horsepower from an offbeat, warbly 5-cylinder. 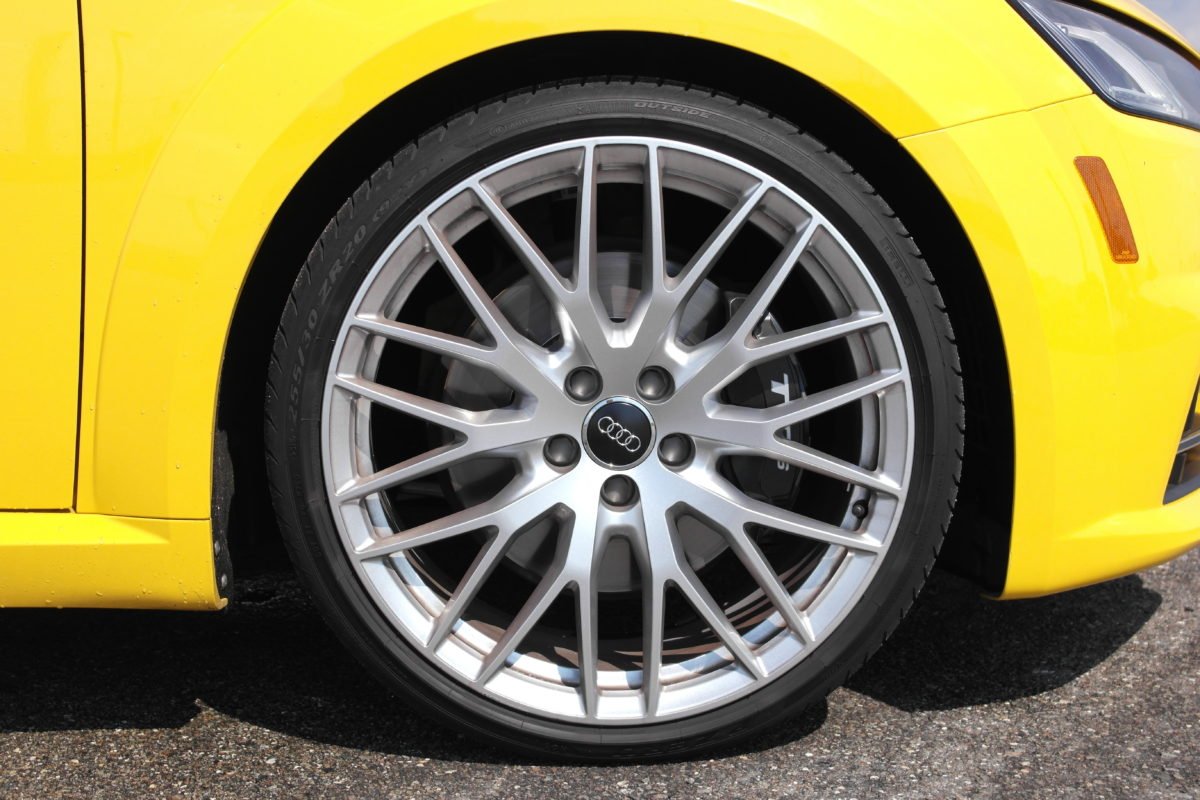 Composed would also describe the handling, which is safe in the way that all front-biased cars are, though the ride could benefit from a semester at finishing school. 20-inch wheels and narrow-sidewall tires contribute to a ride that feels hard all of the time, and harsh some of the time, depending on how aggressive a shock setting you’ve chosen. In the smoothly-paved southern confines that we tested the car in, this doesn’t present such a big problem, but in pockmarked northern cities I could see the TTS being downright crashy. The standard 19” wheels and 35-series tires would be a far better option for those that live with less-than-pristine road conditions, fetching though our tester’s 20-inch multi-spokes may be. 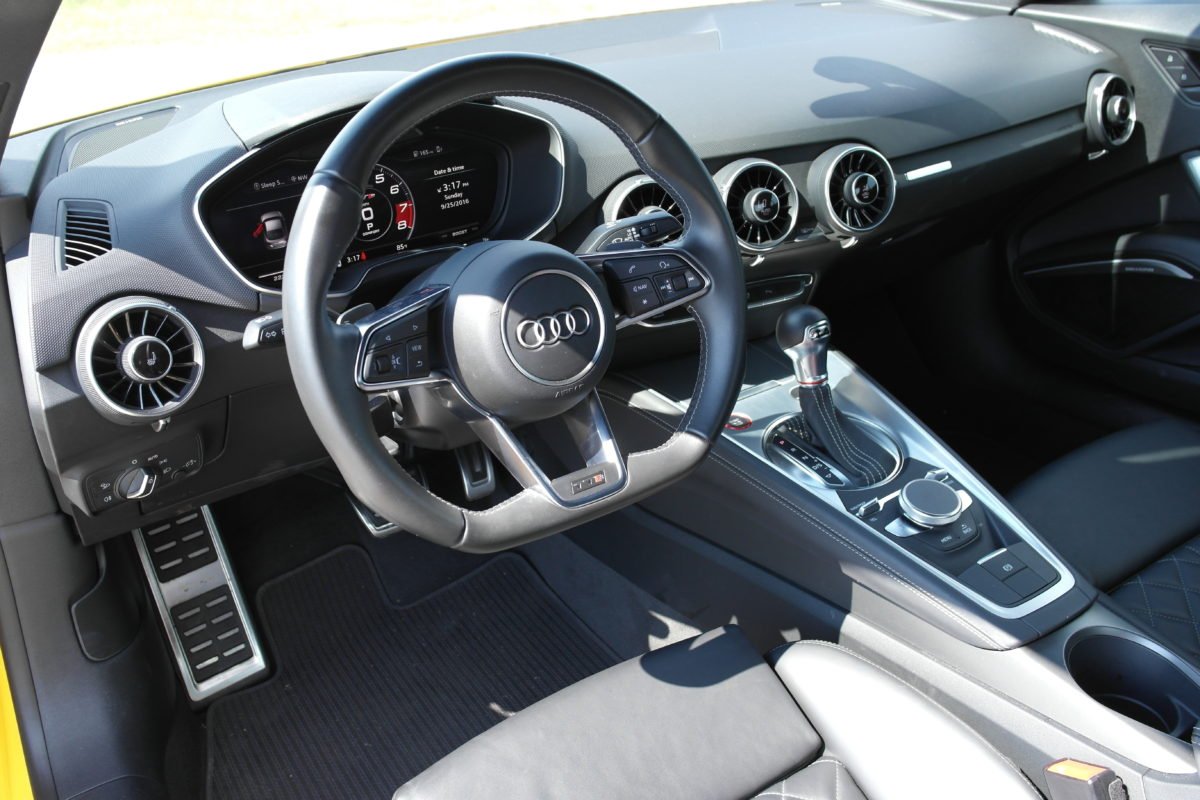 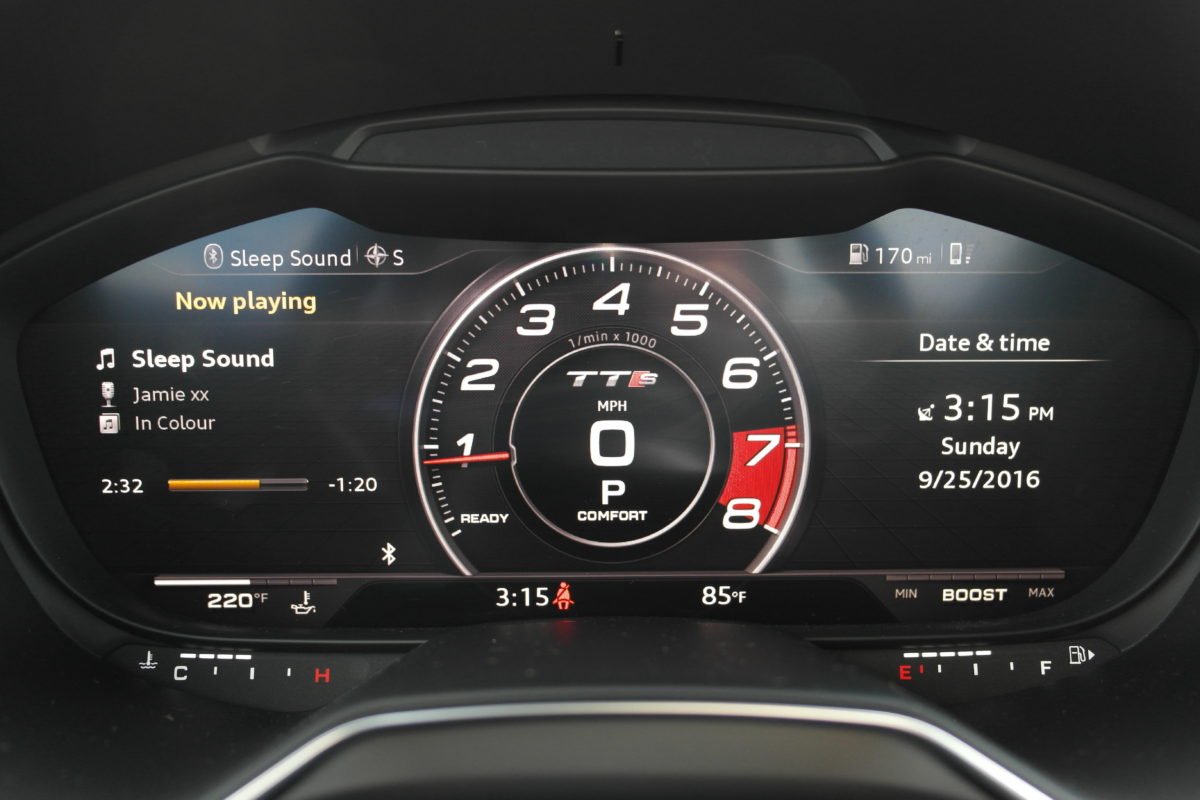 Audi’s going all-in with the glass cabin look of its recently introduced models, and the company’s newfound minimalism is displayed to maximum effect in the TT. Passengers will be immediately struck by the absence of a central screen or even much in the way of switchgear to occupy themselves with. HVAC controls are subtly placed within the center control rings of the vents themselves, while radio, navigation and vehicle settings are all handled through the simple MMI control interface between the seats. All information is shown within the digital gauge cluster, known as virtual cockpit in Audi-speak, which features the same high-resolution graphics and Google map overlays as the Audi A4 tested recently. This means passengers will largely need to trust your abilities as both a disc jockey and a navigator, because they won’t have much control of their own. The cabin is driver-centric to the extreme, and brings the idea of personal luxury coupe to new heights. 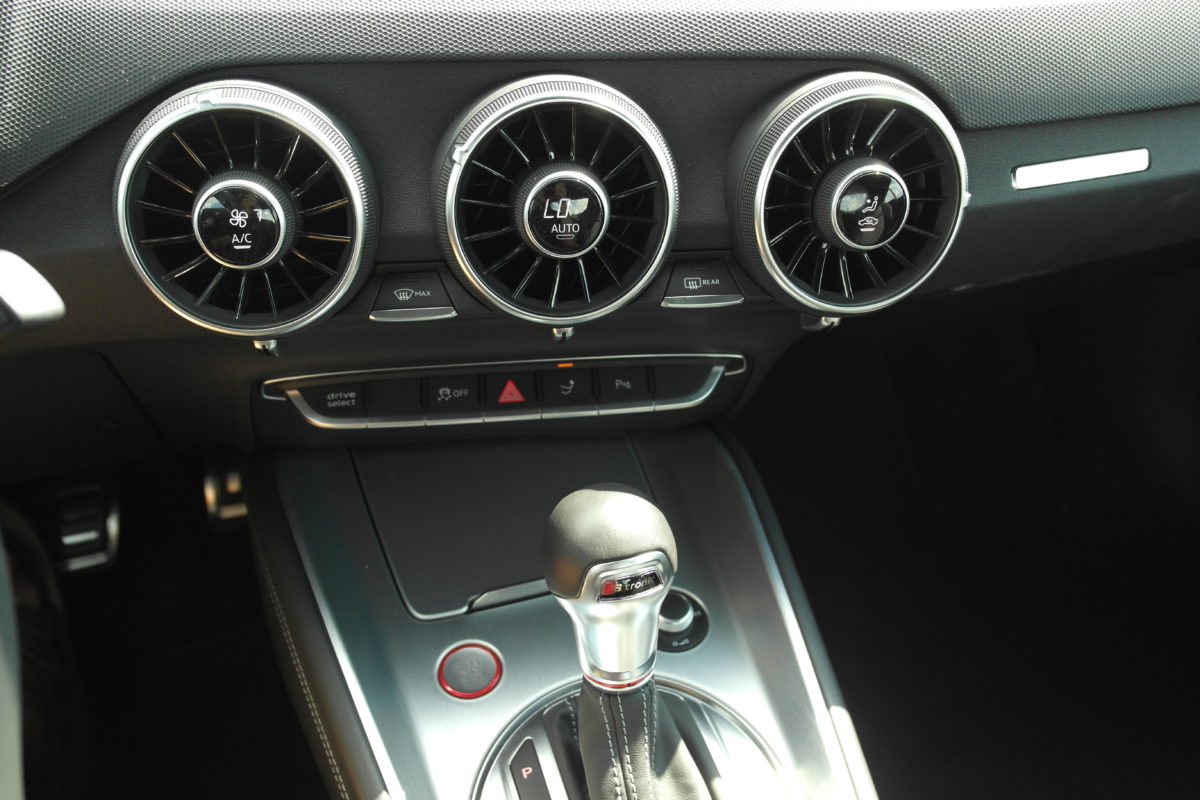 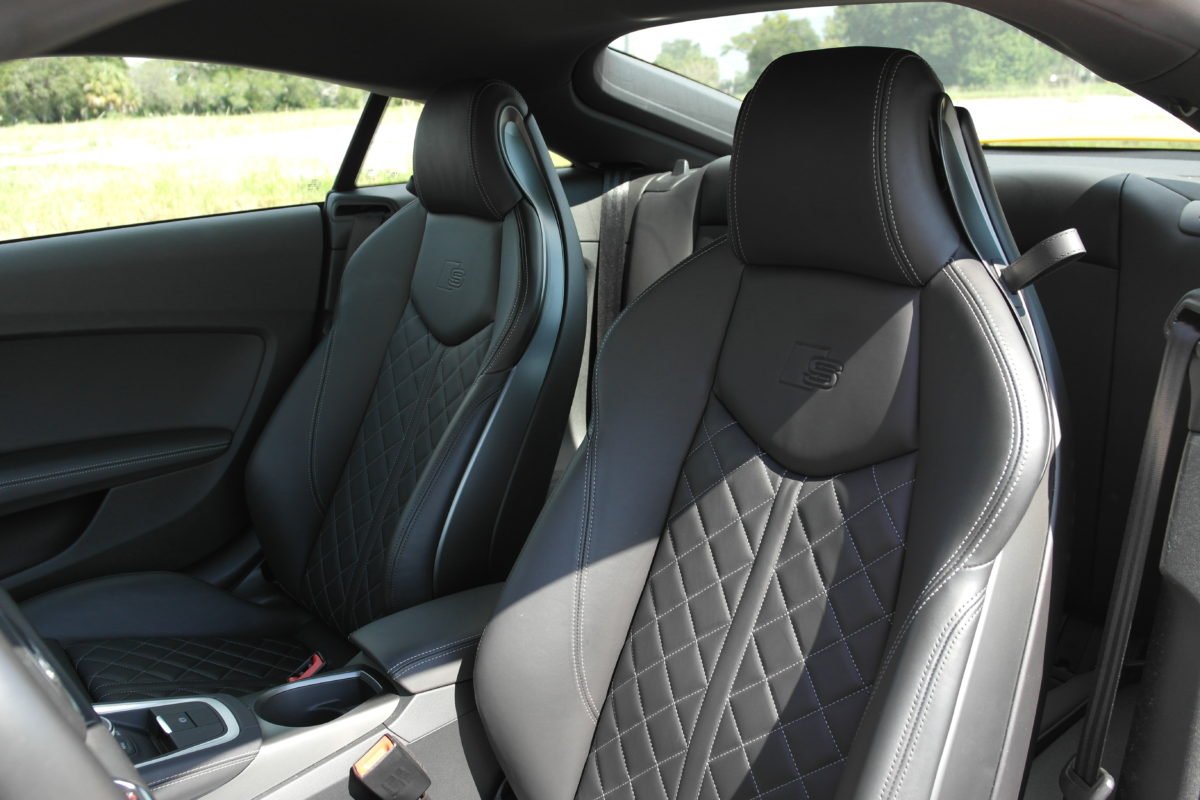 After spending a bit of time in the TT, you’ll wonder why many modern cars have such an abundance of dash clutter. The overall effect in here is strikingly simple and clean, and the build quality impresses in the way that most Audi interiors do. The designers have also eradicated that “sitting in a bathtub” feeling that used to overshadow the TT’s interior; the greenhouse seems to cut closer to the ground, and the view forward is expansive – likely a side benefit of the low, clutter-free dashboard.

Though it remains true to the original TT formula, which is that of stable, compact-based underpinnings masquerading as a true sports car by way of a striking design, the outright performance on offer here is hard to ignore. Sure, you could have arguably the same hardware for less cash and less cache in a more plebeian and practical two or three box shape, but then again, its styling is what makes the TT such a tempting option. The fact that it boasts one of, if not the best interior in its segment only adds to its appeal. It’s a true rarity – a car for the lead-footed and design-conscious alike, at a price point within reach of mere mortals.