Friends, let me tell you about the promised land, because I’ve been there. The rental car promised land, that is. Imagine gleaming rows of current year luxury models and sports cars, from Mercedes E550s to BMW 335is to Toyota GT86s, even the occasional premium model like an M3 or 911. Impossible, short of a fly-by-night Las Vegas exotic rental outfit, right? Nay. The promised land exists, and perhaps unsurprisingly to most car enthusiasts, it’s in Germany. Germany, the land of greatness and the home of Mietwagen Kreta where I rented this beast for the week!

A fixture throughout Western Europe, the rental company Sixt is a relatively unknown entity to most Americans aside from those who frequently travel abroad. I first tried them in Germany during an impromptu Nurburgring trip some years ago while I was living in England. I had reserved one of the cheaper rental classes, but what awaited me in Dusseldorf’s modern airport parking structure knocked me sideways: a spanking new E91 3er Touring, resplendent in Alpine White and full M-Sport trim.

To a German, this is no big deal. My rental was a 318i, in fact, capable of mustering no more than 140 horsepower. It didn’t matter; the thing looked the business, and my prior car rental experiences in the U.S. had produced nothing more exciting than a low-mile Sonata, so an M-Sport 318i wagon was more than enough, thank you. Ever since then, I’ve tapped Sixt for all of my rental needs during travels to the Olde World. I’ve almost always come away very satisfied, including that time I flogged a Toyota GT86 around the Black Forest and an A3 down the Autobahn. There was that Fiat 500L in Italy that I’m still trying to forget, but then again try renting anything but a Fiat in Italy. Seriously. 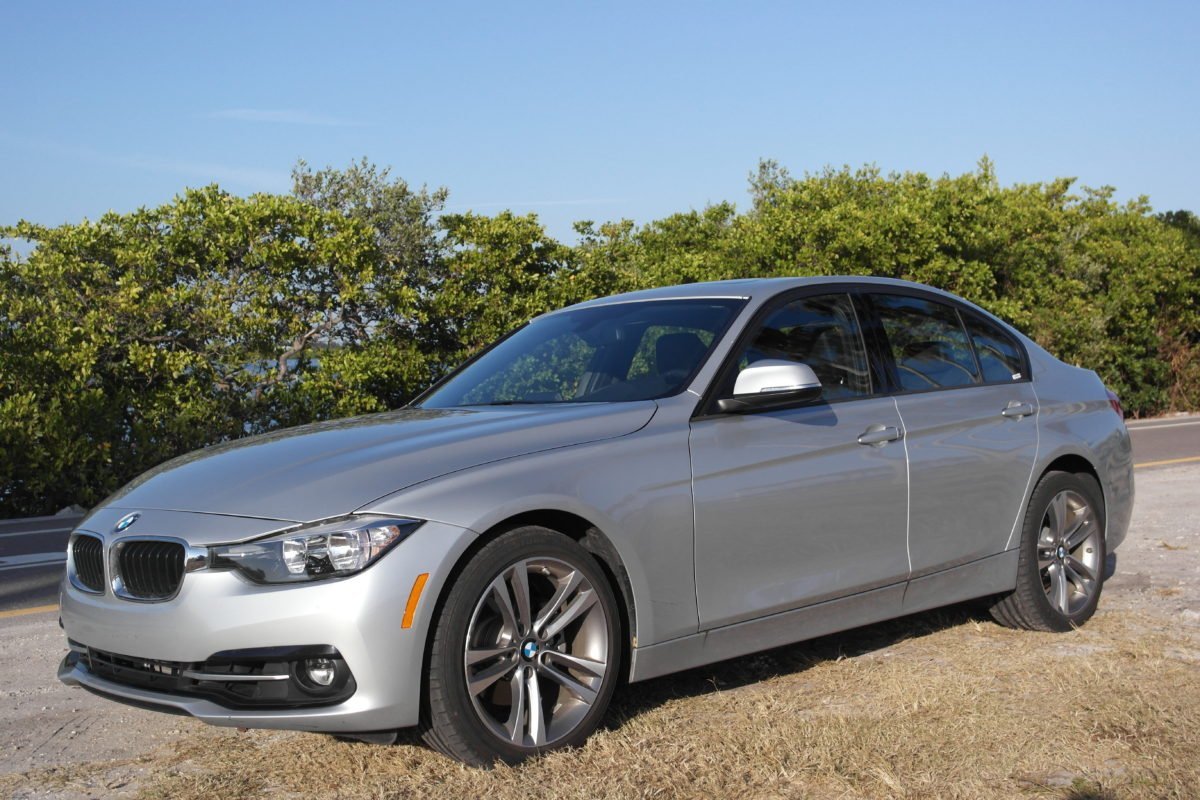 Imagine my glee, then, when Sixt announced they’d be opening a new location about three miles from my home here in Florida. And happily, the list of rental choices looked familiar from those trips to Germany. Alright, so the exotica was missing, but the meat and potatoes were still there: BMW 3-series, Mercedes C-classes and Audi A4s ripe for the picking. For one reason or another, it’s been more than a year since the place opened and I haven’t once enlisted their services. It was time to change that.

The reservation process mirrors that of all the major US chains, though sadly, Alamo/National-style “pick whatever you want” car classes don’t apply here. I’ve found that Sixt locations abroad are more forthcoming about available vehicle options in your specified class than this US outlet seemed to be, though I was far from upset about the 2016 328i Sport package I received, especially for the paltry sum of $16 per day I paid (thanks, Black Friday sale). With taxes and other surcharges added in, the final daily rate was closer to $45. 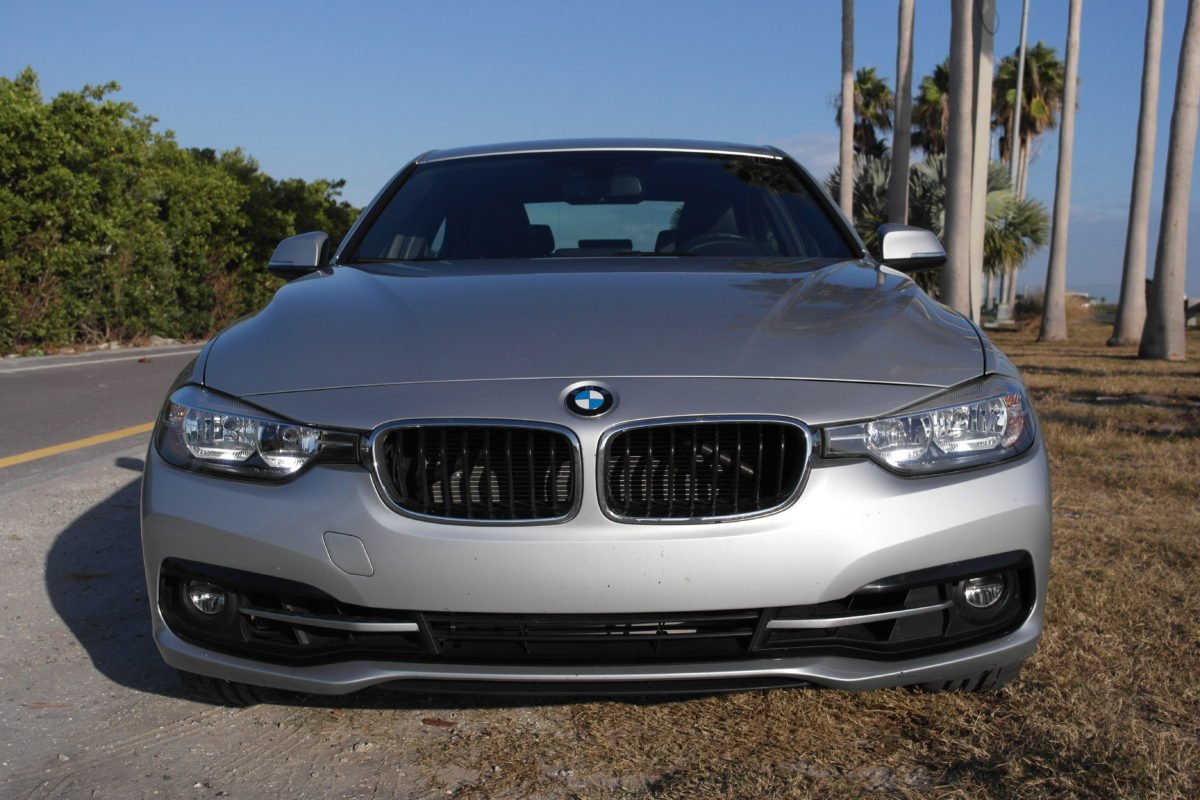 For average rental car duties, there’s not a whole lot to recommend a 328i over the equivalent Altima or Impala you would get from the major rental chains. The back seat isn’t very large, nor the trunk. And in silver, it’s every bit as anonymous as those “Full Size” class substitutes, though some would argue the badge on the hood is worth quite a bit. For our purposes, I’ll try to look past that, because in Germany this thing has all the cache of an Altima SEL. Those that actually enjoy driving, however, will eventually pick up on the 328i’s subtle charms.

Truthfully, the 3-series driving experience isn’t what it once was. As mainstream sedans have gotten better to drive, BMW has shrugged off some of the immediacy and feel that used to be baked into every 3 in exchange for more technology, larger dimensions, and more weight. The result of this keeping-up-with-the-Joneses approach is that while the BMW might offer more to the tech-conscious shopper, they’ve lost a lot of the magic that made these the unsung handling heroes of the professional class. As a result, it’s falling prey to sedans that previously couldn’t hold a candle to the Bimmer’s handling – namely the Audi A4, Lexus IS and Mercedes-Benz C-class, all of which are now on a fairly level dynamic playing field with the Bavarian. 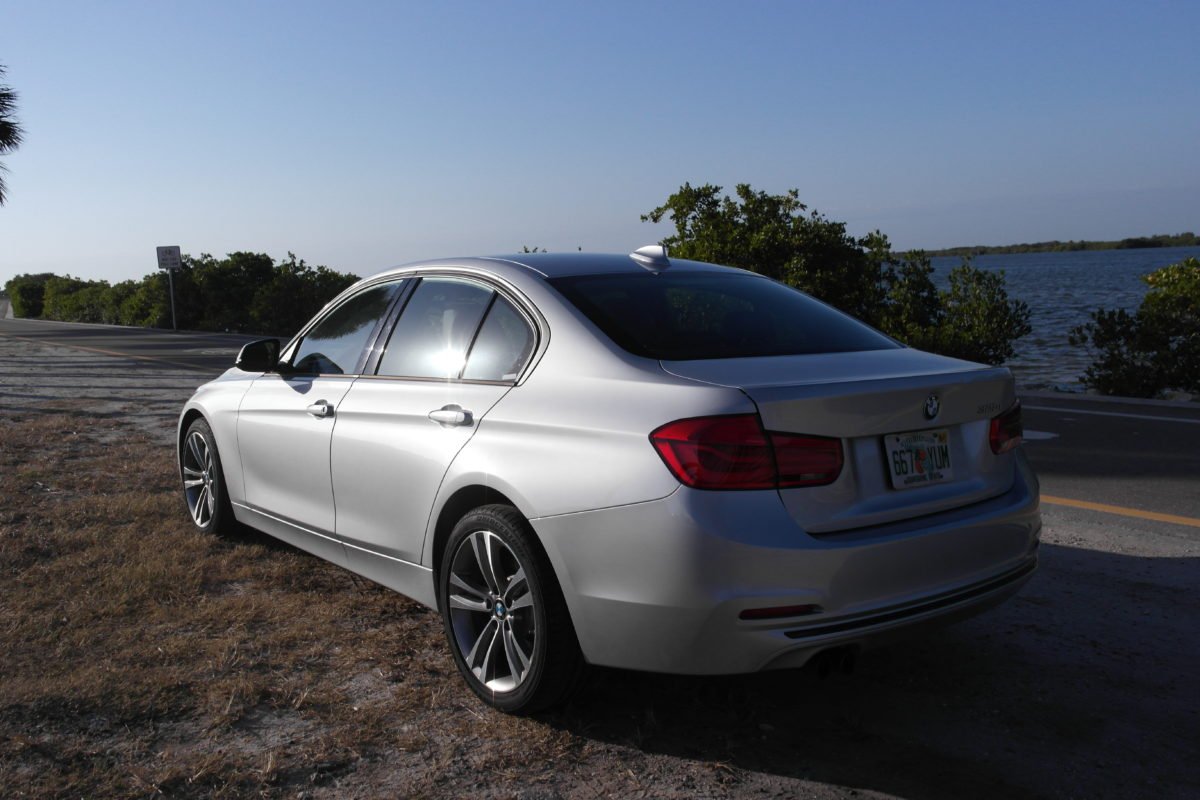 But although what remains may be watered down, it’s still got plenty of the right components for driving enjoyment. The driving position is spot on, and the sport seats hug in all the right places without being overly confining. Many bemoan the current 3-series’ loss of steering feedback, and indeed the front wheels speak in overly muted tones through the leather rim, but the weighting and speed are still spot-on. Our stripper Sport model wasn’t optioned with the variable sport steering, and I’m sure it’s better for it.

In hard cornering, the 328i turns in eagerly, surely benefiting from a lighter front end than the six-cylinder cars, and it corners with alacrity and minimal body roll. Grip is surprisingly strong from this rental’s well-worn 18″ Bridgestones; the 328i can still dance like a base Bimmer should, and makes a good case for sticking to the lighter-engined four-cylinder cars if you value handling above all else. For those shopping, the 3’s nomenclature has changed from 328i to 330i for the 2017 model year, denoting a revised four-cylinder engine and an 8-horsepower bump. 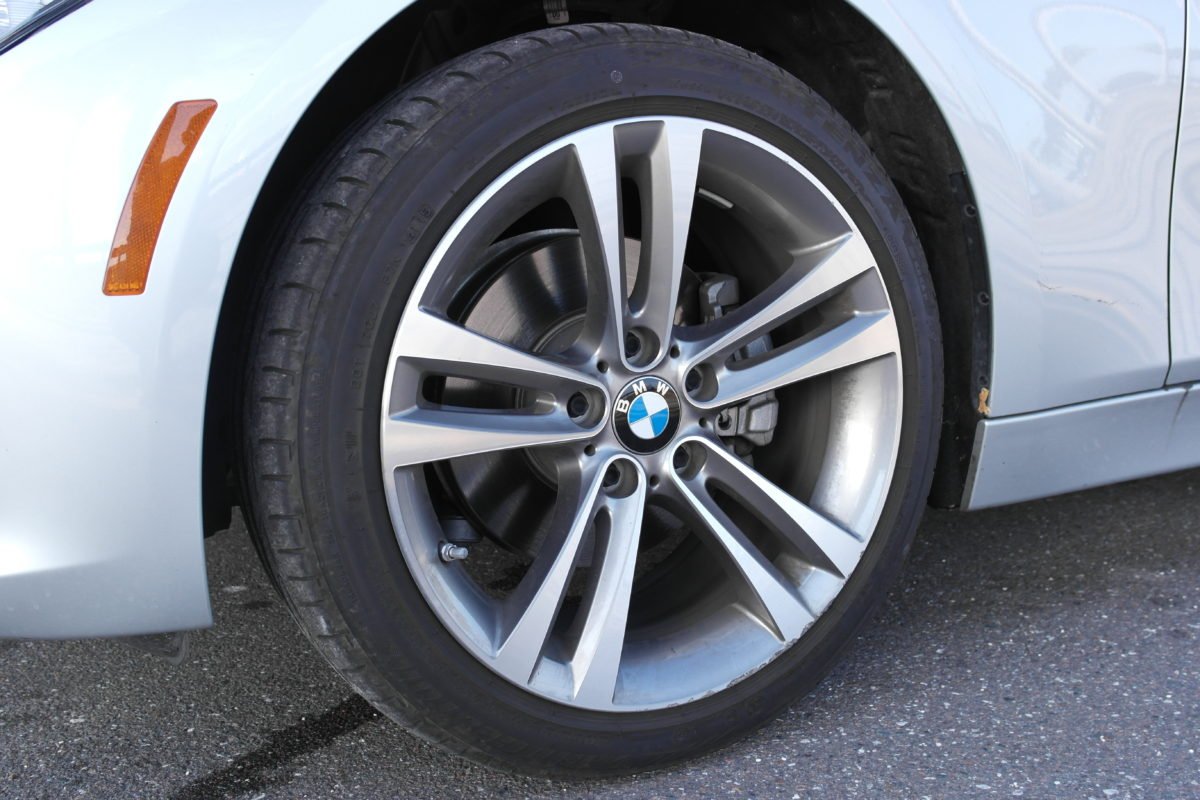 The powertrain makes less of a case for itself than the chassis. There’s nothing to fault with the 8-speed ZF automatic; this transmission is as peerless as ever, responding quickly when you want it to and transparently when you don’t. No, it’s the 2.0-liter turbo four propelling the 328i that could stand to be improved. It’s not power that’s the problem; the N20 gets the Bimmer out of its own way quite well, actually. And with a 27 MPG average returned in mixed (fast) driving, it’s economical, too. But it’s the four’s character that’s out of step with its upmarket mission: that gravelly, joyless diesel-like sound and character, completely out of step with the high-revving, naturally-aspirated mill this chassis deserves. I wouldn’t call the N20 the 328i’s Achilles heel, exactly, but it could definitely stand to go to finishing school. The clattery jolt it sends shaking through the chassis when it auto-starts back into life at stoplights doesn’t do it any favors, either. 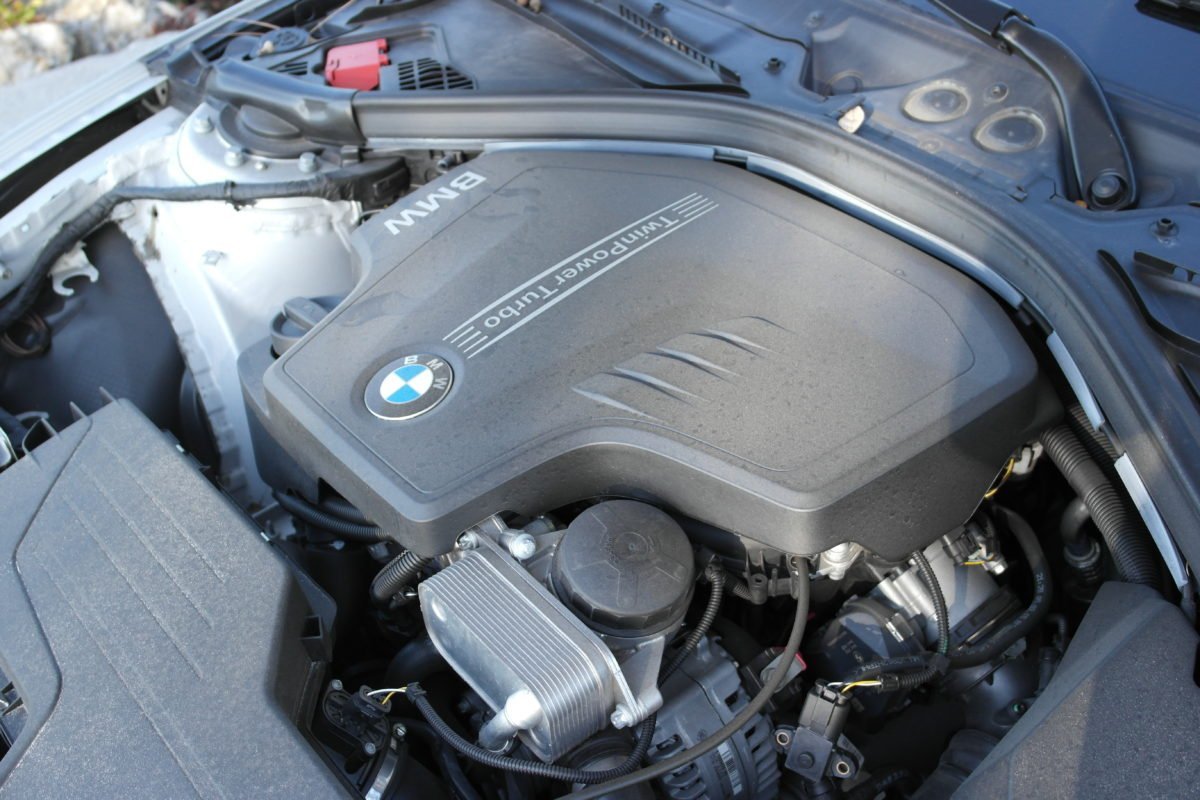 There’s not much to rant about with the rest of the 3-series package, although there’s equally little to rave about. Aside from the aforementioned touch points of seats and steering wheel, which impress in their tactility, there’s nothing very special about the interior, either in material quality or layout. The usual frustrations from BMW’s double-effort door releases, turn signals and engine power button are still present and accounted for. The materials wouldn’t be out of place in a $20,000 Golf. And against an as-tested sticker price of $41 large, the options list will look paltry to anyone who’s purchased a new car in the last 8 years. Backup camera? Optional. Keyless entry? Optional. Heated seats, navigation, a semi-decent sound system, real leather and a power moonroof? You know, things that would be considered de rigueur in a mid-level Accord? All optional extras on the 3-er. Add that stuff back in, and you’re looking at a $50K car. But such is the price of progress, they say, and really, it’s par for the course with the German marques. 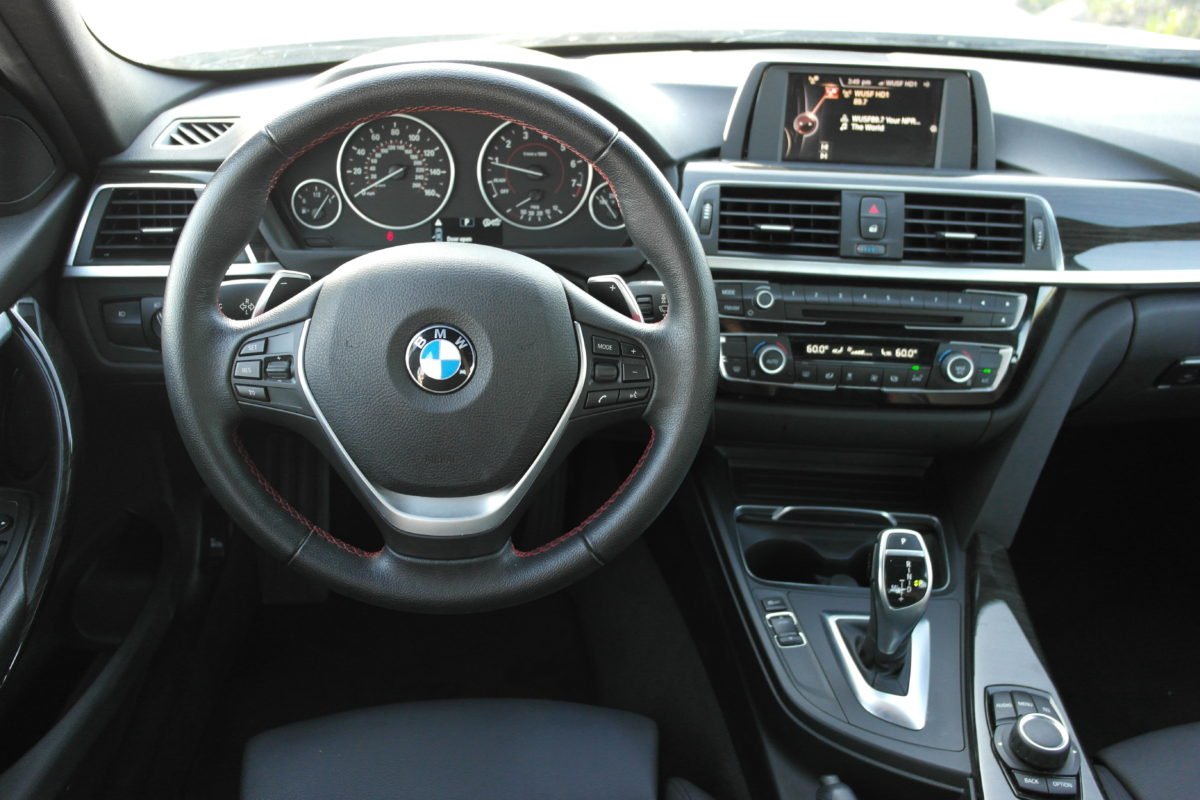 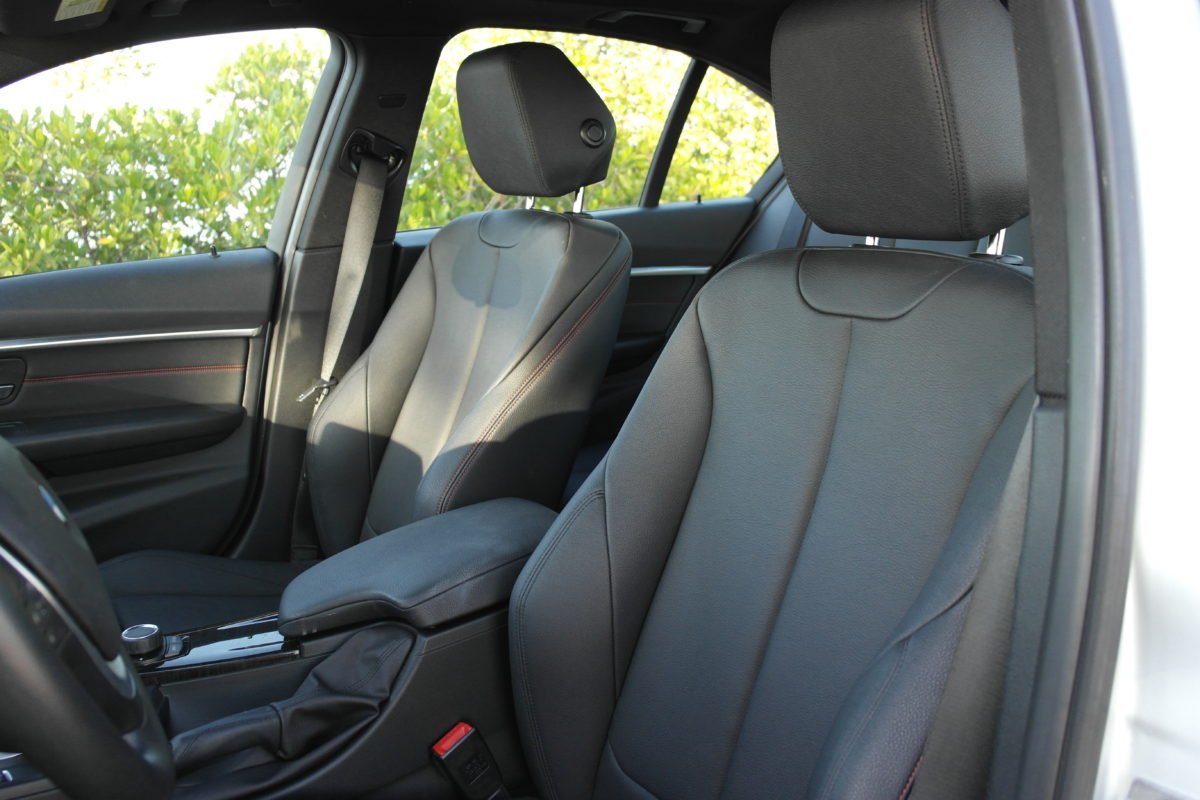 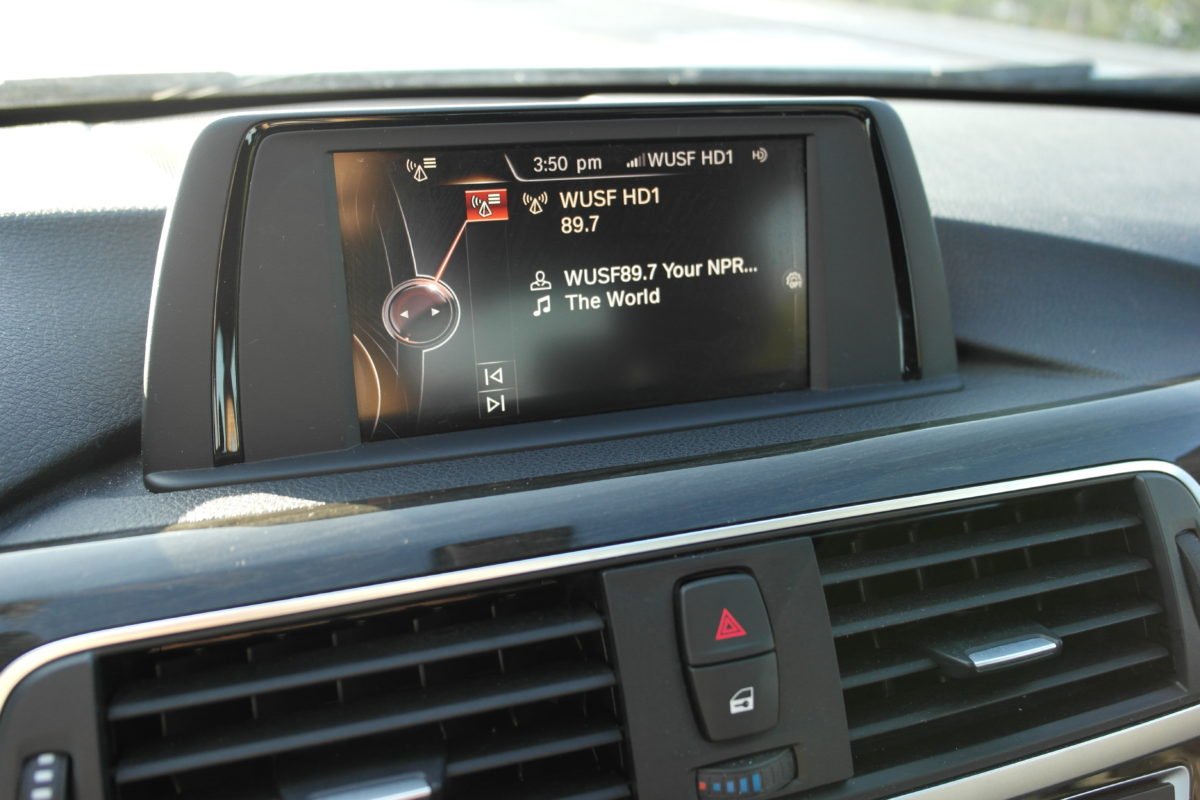 As much as we car lovers may mourn the loss of what the 3-series used to be, it remains a sedan that satisfies the keen driver. The 328i’s biggest problem is that the rest of its class has advanced dramatically, and some of the car’s foibles – like pricey options and a somewhat unrefined engine – are now brought into sharp contrast with its equally athletic and higher-value competition. As an impromptu rental car, it more than fits the bill, and I’ll continue to choose one when I have the option at the rental counter. Unless, of course, there’s an IS350 F-Sport nearby.