Despite no longer cosying up to the warm bosom of the press fleet industrial complex, I still occasionally find myself behind the wheel of cars other than my own. Such was the case last week when I brought my own car, a C7 Corvette Z51, into the dealer for some warranty work and found myself sitting in the fortified bunker – aka cabin – of a loaner 2017 Camaro. Unlike the other sixth gen that I previously wrote up on these pages, which was option-laden but also saddled with the middling 2.0T Ecotec, this one featured nary an add-on save for the 3.6L LGX “High Feature” V6…a swap that made this drab-looking coupe immeasurably better to drive.

Rentals and service loaners are excellent ways to determine whether a car’s core character is virtuous or not. With every bit of frill thrown on top, most press cars are ordered to deliberately disguise any inherent design or engineering shortcomings. Your local dealer has no such hidden agenda. They’re just throwing a modicum of basic convenience toward their customers in an effort to keep them coming back and feeding the service department cash cow. You’ll take any car they’ve got available and like it, because it’s a hell of a lot better than sitting in the waiting room drinking burnt coffee and working on your phone.

Luckily, I really did like the car they gave me – and it reinforced the belief that the Alpha platform the current Camaro sits on is the stuff of car guy dreams. Not only will it easily accommodate everything from a turbo four to a blown V8 (looking at you, ZL1), it’s also a handler. Credit a lighter curb weight and trimmed dimensions. And boy, it really handles. Like its Cadillac ATS platform mate, when you point the Camaro into a corner it responds to your inputs enthusiastically and in real time. The steering is honestly weighted, has just enough feedback to get by, and is quite quick – but not too quick. Body roll is minimal, and the ride from this example’s pleb-spec 18-inch wheels and tires was noticeably more polished than what was provided by my 2.0T presser’s dubs. If you can’t stand the look of the 18s, it might be worth upgrading to a model with Magnetic Ride Control – the deterioration in ride quality between the 18s and the 20s is noticeable on standard dampers. 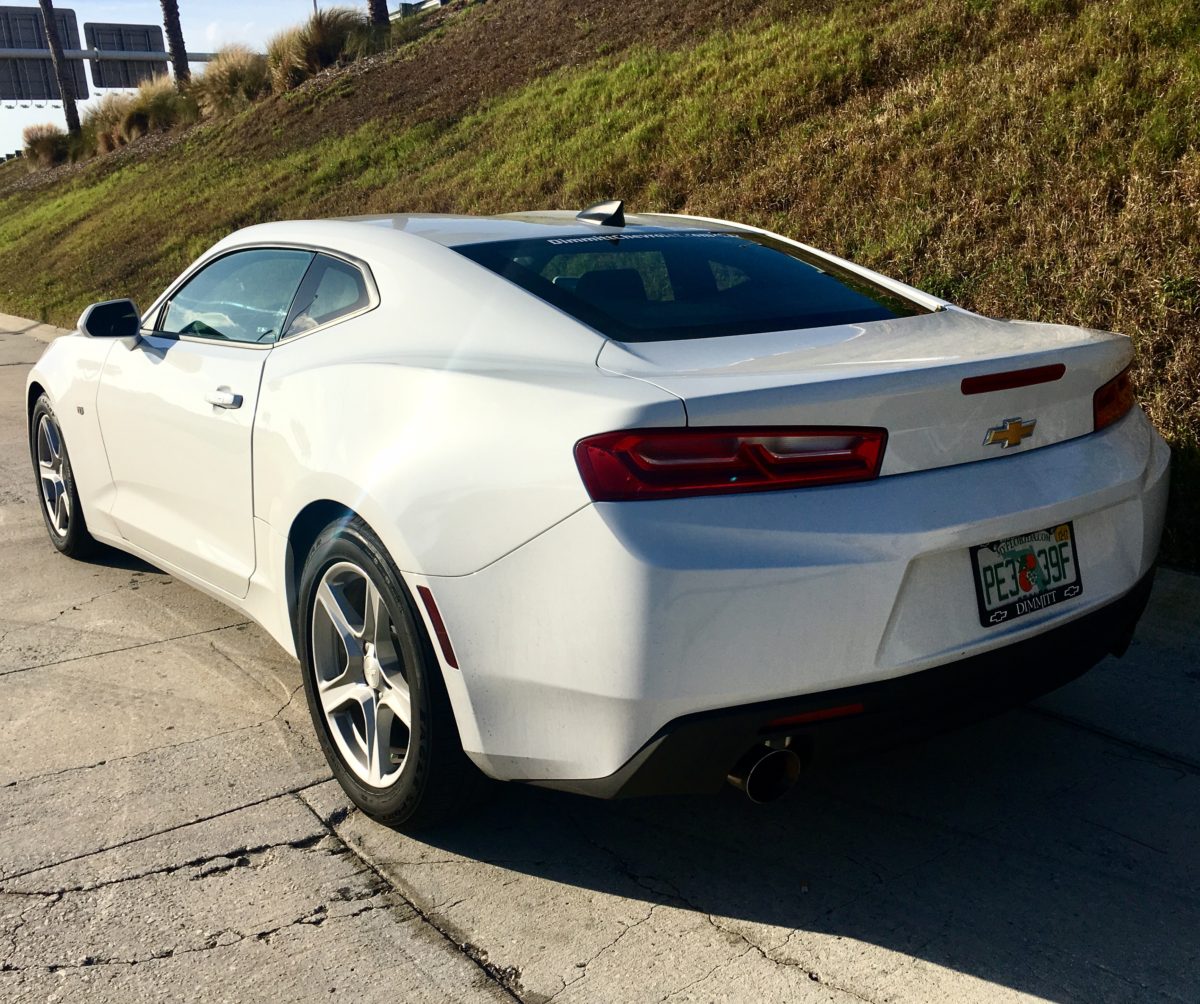 The V6 also has a clear leg up over the four-cylinder in the power department – even more than the 60-horsepower on-paper advantage would suggest. Unlike Ford, who positioned their EcoBoost four banger in the middle slot in the lineup over the base V6, Chevy went the other way. Perhaps they couldn’t eke enough detonation-free power out of the Ecotec to make it happen. Or, maybe they just realized that a naturally-aspirated V6 with some tender loving care thrown its way will be better than a turbocharged four in almost every respect. Regardless, the lusty 3.6-liter is well worth its $1,495 price of entry.

It’s not a stump-puller, mind you – if low-end torque is what you’re looking for, scrape together a few more shekels for the SS’s LT1 V8. The V6 has to be revved to extract maximum thrust, and this results in a bit of a thrashy engine note on the way to redline. The Camaro’s mill certainly won’t trouble a Honda V6 for smoothness. Still, there’s plenty of punch on tap and the 8-speed automatic GM employs here keeps the 3.6 in the meat of the powerband most of the time. It’s not hard to imagine a world where the naturally-aspirated V8 has been relegated to the past; it’s called Europe, actually. And if the V8 weren’t offered here at all, this V6 would more than suffice as the Camaro’s top engine. But given that it’s still available and the price gap isn’t too egregious between the two models, I can’t wholeheartedly recommend that you pass up the V8 in favor of the V6. But if you did choose the V6, whether for reasons of upfront cost, fuel economy (I averaged a very respectable 26 MPG), or some other factor – I wouldn’t fault you for it. The Camaro V6 is no longer a configuration to heap scorn upon. 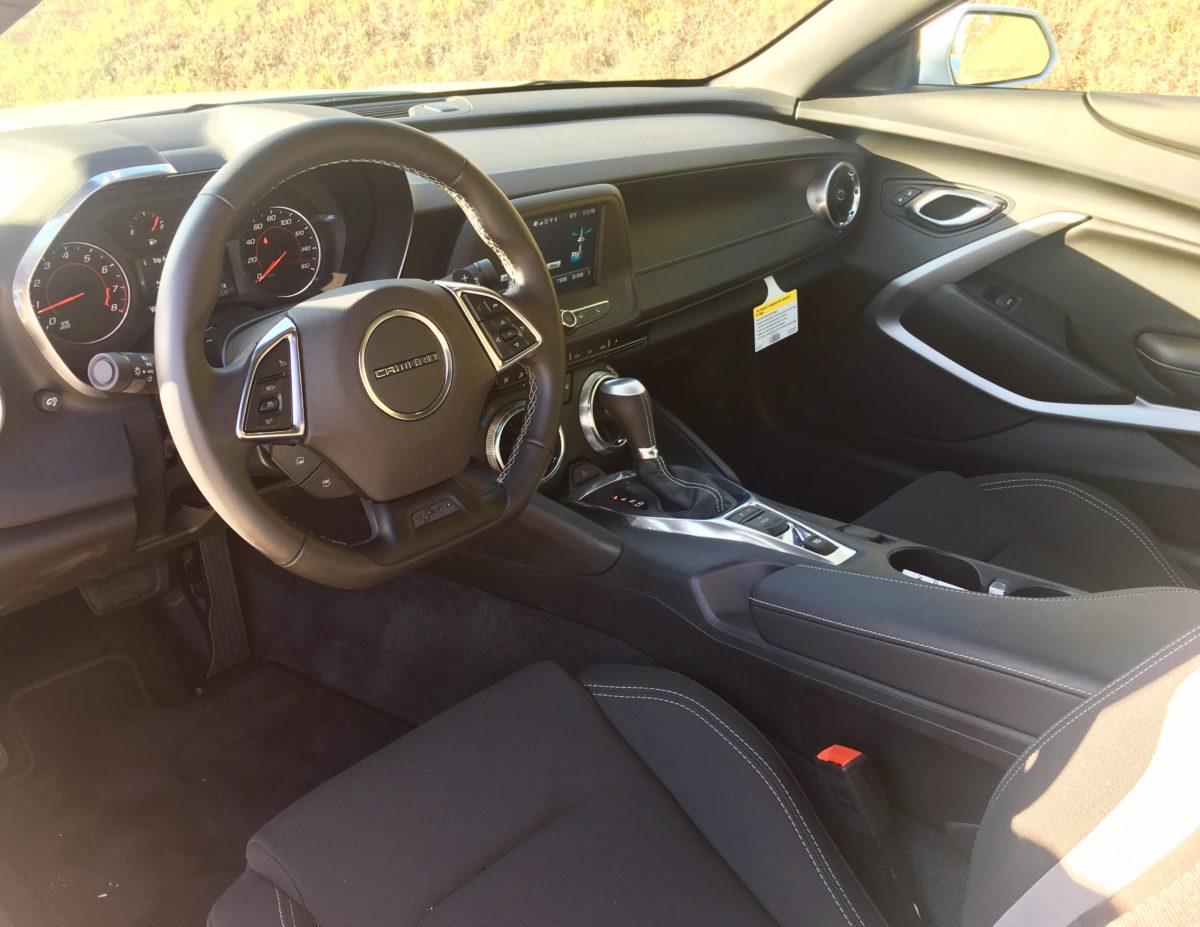 The same can’t be said of the Camaro’s interior, sadly. Though it’s an improvement over the last gen, it’s not the kind of fundamental improvement this car needed. The A-pillars are thinner, but they’re still tree trunks, and combined with the gun-slit greenhouse, outward visibility is pretty terrible. You’ll have to be a fan of spelunking if you buy a Camaro, because it’s an absolute cave in here. Visibility issues also affect the center display, which is tilted downward at an awkward angle yet still manages to pick up some funky reflections from the windshield. Much has been written about the knee-freezing air vent locations, too. Ergonomically, it’s all a bit of a mess, which is a shame because material quality is noticeably higher than the previous model and even this base trim’s content levels satisfied.

That the current Camaro’s done an about-face in its sixth generation is no surprise. The last one signed checks with its looks that its driving dynamics couldn’t cash; it leaned just a bit more toward style than substance. That’s certainly not to say it was a bad car, and the special editions – the 1LE, the ZL1, the Z/28 – were worthy of much admiration. But the platform’s ponderous weight kept it from being as righteous a driver’s car as it could have been. This new model has no such issues. It is a fully resolved driver’s car; one that’s fleet of foot with enough power and handling prowess to satisfy even the most hardened shopper. 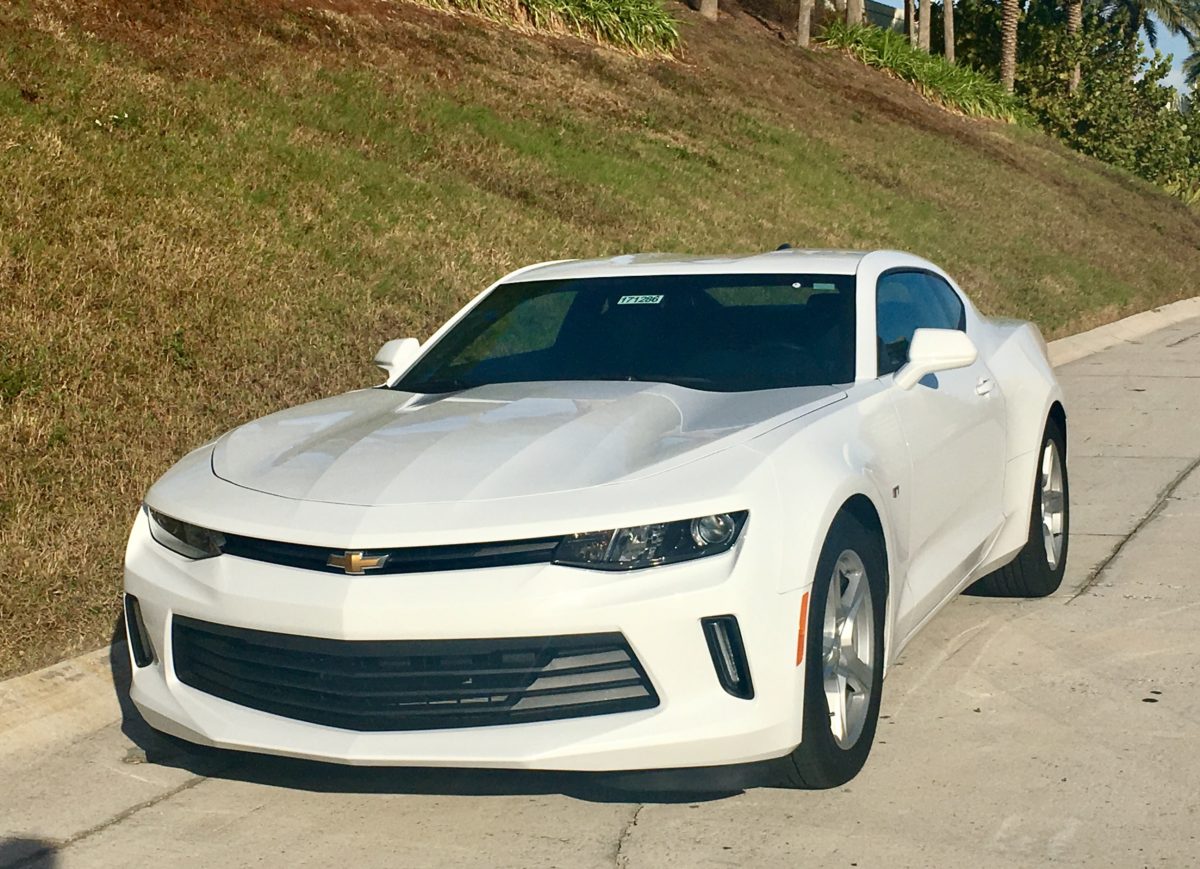 Nevertheless, the interior is a deal-breaker for me. Visibility isn’t just a comfort thing, it’s a safety thing. The thought that kept running through my mind while driving this Camaro was “what would this be like on a racetrack?”. I mean, those thick A-pillars certainly impart a feeling of safety, should the worst occur and metal meets wall, but honestly, what about keeping yourself out of the wall in the first place? Understanding nightlines, aiming your eyes up and focusing down the track, is a fundamental first lesson in track driving. Would the Camaro’s mailslot windshield affect my ability to place the car accurately and safely on track? Who knows – I haven’t driven one in that setting and perhaps never will. Still, I’ve got to believe that GM has the engineering ability to make this situation better, and the only reason they haven’t – presumably – is for reasons of vanity. A narrow greenhouse and high beltline make the car look cooler. And styling sells sporty coupes.

Much to the chagrin of the dealer that loaned it to me, there’s no Camaro in my near future…unless a seventh gen car that fixes the visibility issue is right around the corner. But for buyers that can see past those monster A-pillars (see what I did there?), they’ve now got a chassis befitting a sports car. This is the Camaro that zigs.