Wide open vistas. Limitless blue skies. Stunning canyons carved over millennia into multi-hued layers. The southwest provides all of it, and I can’t think of a better way to traverse it than in a fast, open-topped tourer with lots of horsepower. Which is precisely why I headed straight to Alamo’s midsize SUV lane for a “Toyota RAV4 or similar”.

Dodging hordes of parents with sniffling children in tow, my wife and I walked past one picked-over rental aisle after another before realizing that this Thanksgiving weekend, everyone had reserved a Toyota RAV4 (or similar). The full-size sedan aisles, meanwhile, were chock full of Fusions and Altimas; turns out the crossover trend is a thing. Our only option was a lone, drably silver Kia Sportage. Pulling open the rear hatch with a sigh, I resigned myself to spending the next six days and nearly one thousand miles behind the wheel of Gwangju, South Korea’s finest before spotting a freshly washed Cherokee being parked nearby. Quickly motioning to the wife that a (perceived) better option was available, we barely waited until the lot porter had jumped out of the driver’s seat before throwing our stuff in and hitting the road. 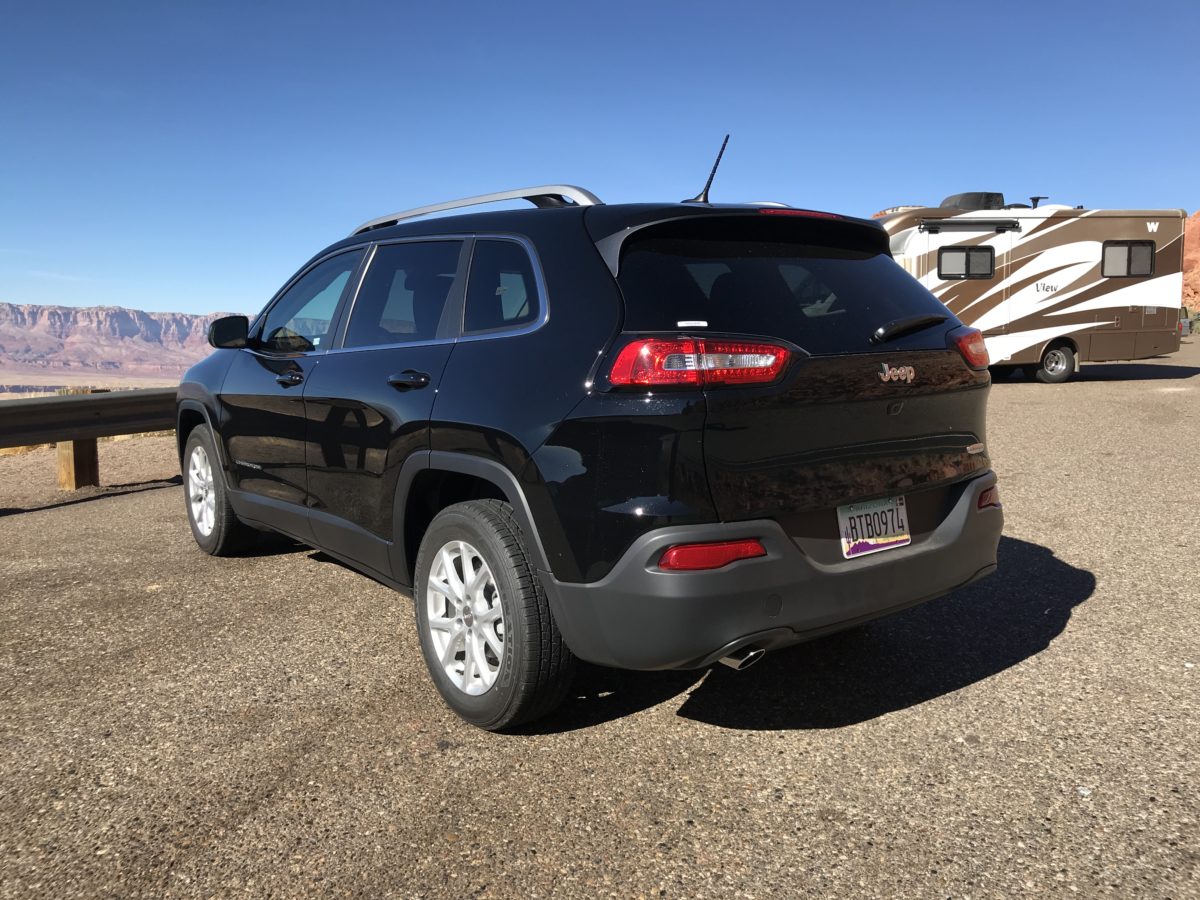 Only a few miles elapsed before I second guessed that split decision. My last and only seat time in this generation Cherokee came back in 2014 when it was first released, and I walked away in admiration of some of its big car qualities, but far less impressed with its performance and overall refinement. This 2017 model (with roughly 1,000 miles on the clock when I picked it up) did little to change those first impressions, although there have been some notable improvements.

While most crossovers have fully embraced turbocharged four cylinders as the de facto power option, that trend has passed the midsize Jeep by – neither of the Cherokee’s engine options are pressurized (yet). While that’s not such a problem for the optional 271-horsepower V6, the standard 2.4-liter four cylinder seriously struggles to keep pace with even moderately paced traffic. At the high altitudes of our Arizona and Utah trip route, the issue is exacerbated. Passing zones on country two-lanes require sustained seconds of foot-to-the-floor, pucker-inducing throttle openings. Coupled to an unresponsive transmission prone to hunting, the 2.4 makes sustained forward progress a true chore above 55 MPH. Fuel economy suffers as a result, with my overall highway averages hovering close to 25 MPG. I matched the 30 MPG highway rating only on sustained downhill stretches. 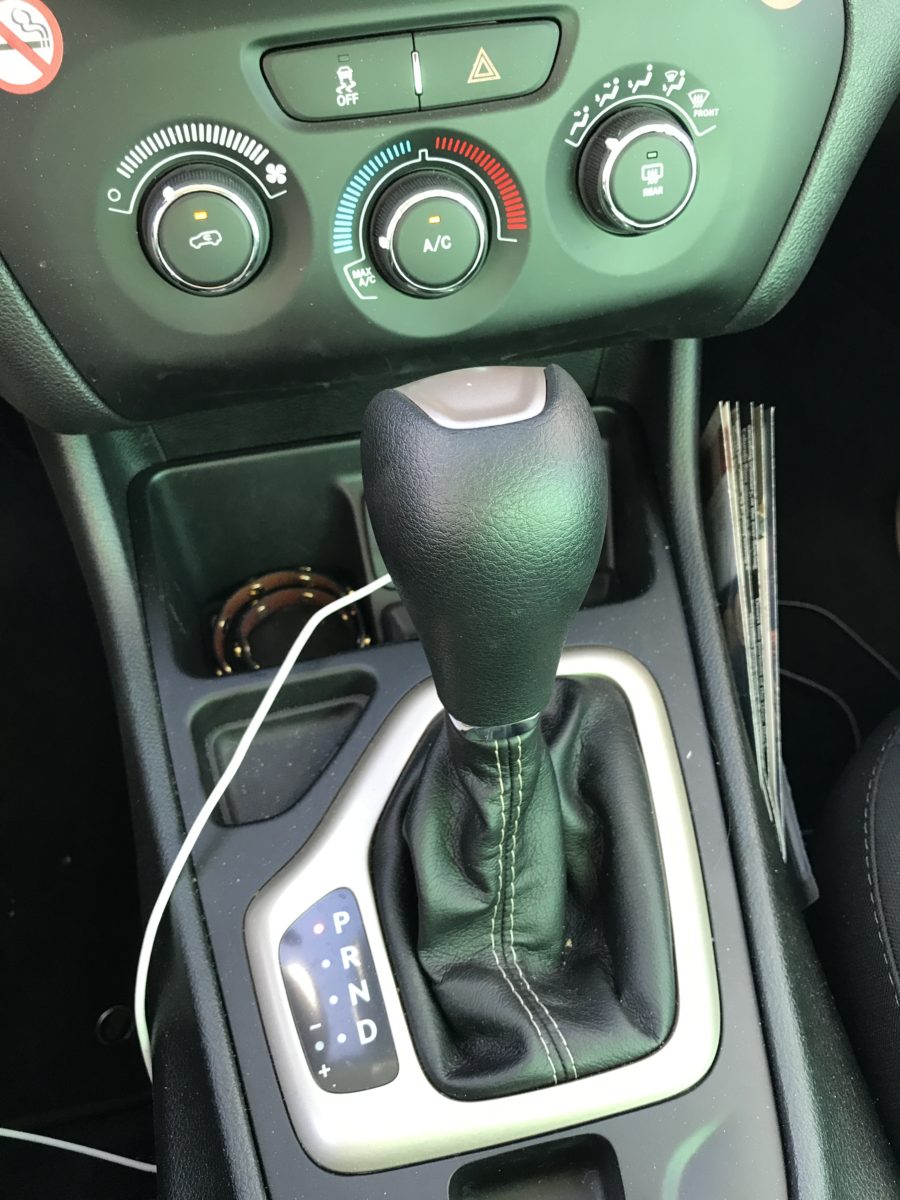 Speaking of that transmission, the 9-speed ZF-supplied automatic caught a lot of heat when the Cherokee was first released, and rightly so. Functioning mostly like an 8-speed (mega-overdrive 9th was rarely, if ever, reached), unwilling to take manual commands from the gear lever, and shunting out abrupt shifts the rest of the time, it was a generally unhappy ‘box to live with. Whatever programming updates made since then seem to have helped, although it’s still hard to predict what gear will be summoned by the transmission’s internal brain, and manual shift inputs are often denied. At least the shifts themselves have been smoothed out, inducing no head bob or structural shudders.

The chassis is still well-suited to keeping those onboard isolated and comfortable. The Cherokee drives like a much larger box than it is, because it’s heavy – between 300 and 500 pounds portlier than the competition, depending on configuration. Even our stripped-out, front-wheel drive Latitude model tips the scales at nearly 3700 pounds, and fully loaded AWD trims crest two tons with ease. Some of that weight has surely gone into sound deadening and rolling stock, because the Cherokee dampens big impacts and muffles road noise like few cute utes can. Steering feel is syrupy and completely mute, and you could hardly call the thing tossable, but at least it’s comfortable and fatigue-free for long stretches, which fit our purposes to a tee. 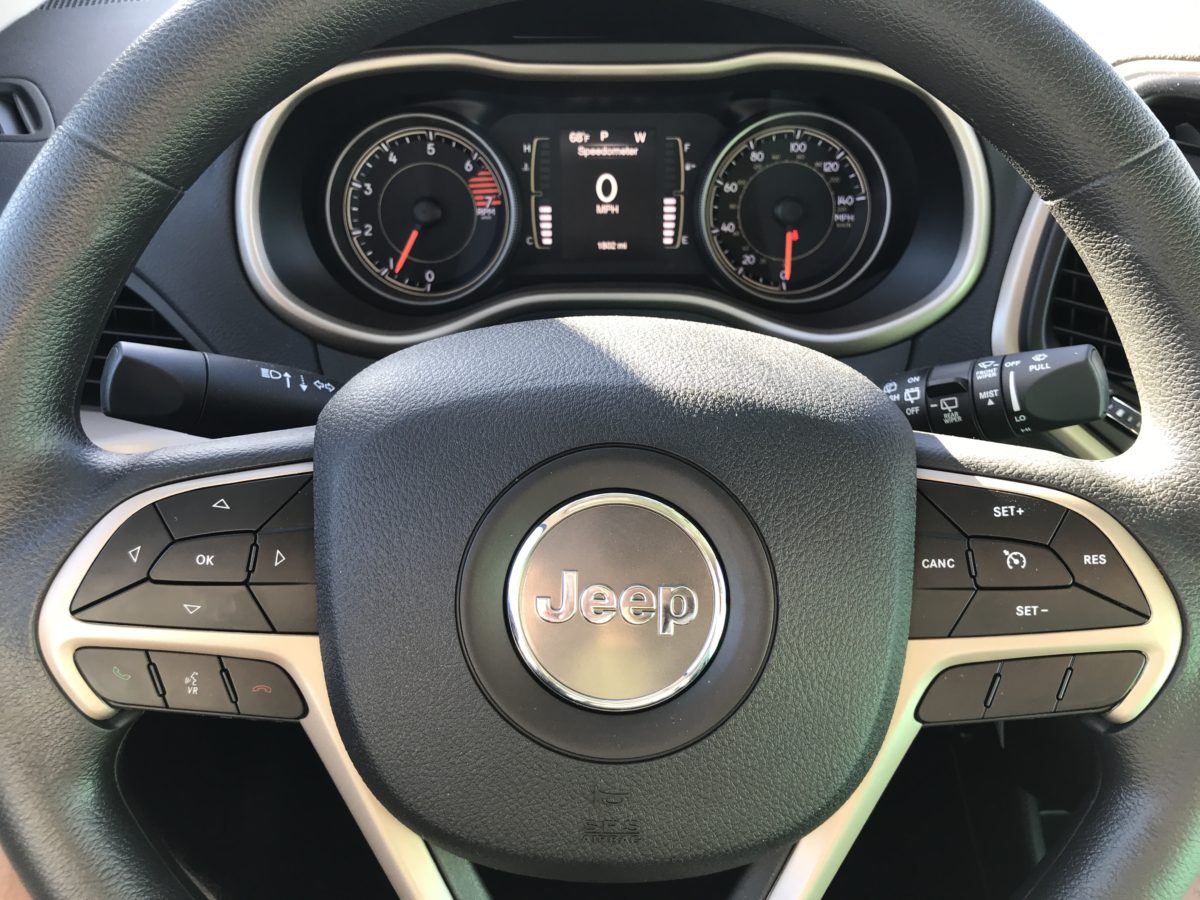 The Cherokee’s styling divided opinion back when it was released four years ago, but time and familiarity have made the squinty, dual-headlamp face seem almost quaint now. HID bulbs are now fitted as standard in those headlights, even on our lowly Latitude, which is a selling point. Alloy wheels, roof rails and various trim brightwork lift the stigma of “base model” to a passable impression of “mid-grade”, especially when dressed in black paint. It’s not a terrible looking thing, particularly among the ranks of crossovers that have joined the fray since this Cherokee’s introduction. 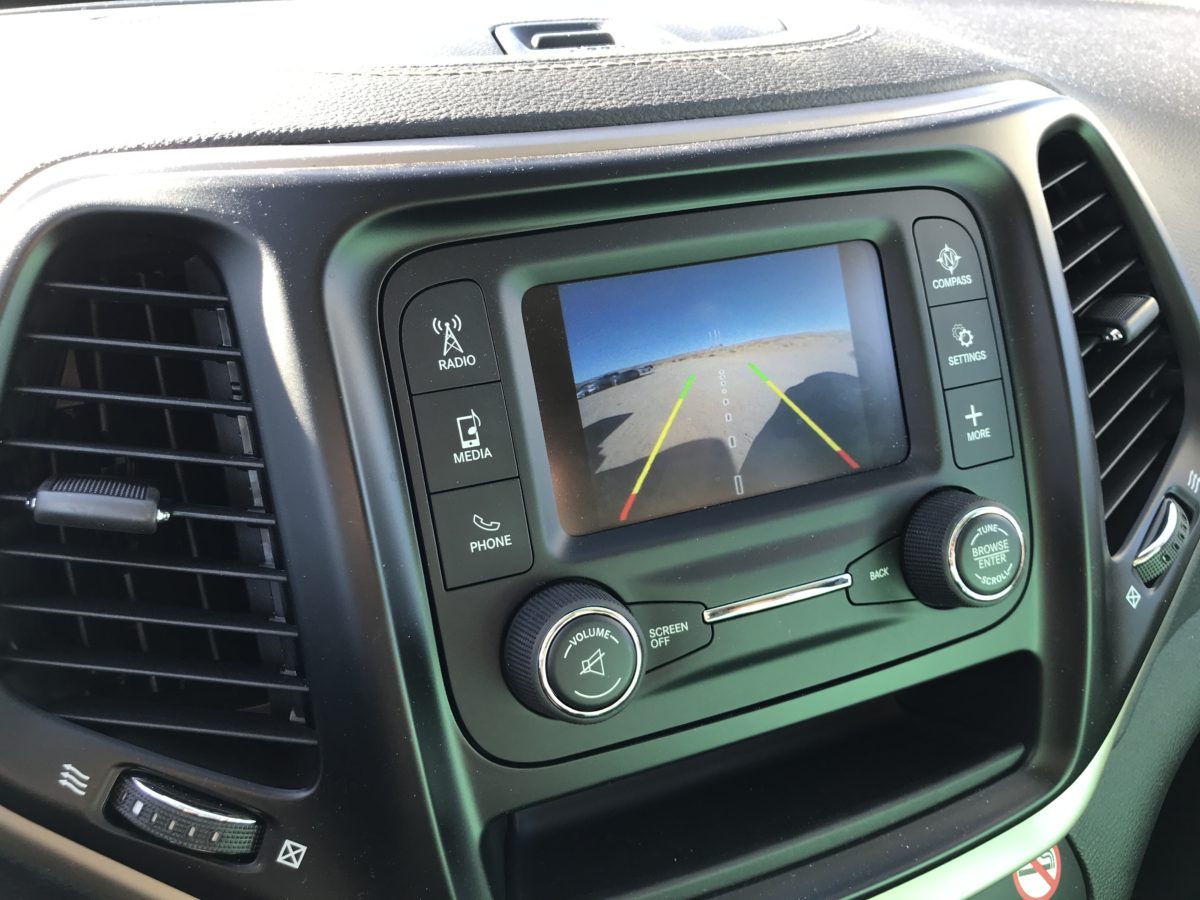 Interior-wise, there’s little here to offend, because while the build and material quality won’t trouble any of the top nameplates, there’s nothing especially egregious going on either. In practice, it’s roomy and comfortable enough to satisfy four adults, as long as they pack light. The only glaring faults on our cheap-seats tester are the dinky center stack display – an obviously ploy to upsell you into the 8.4-inch uConnect screen – and the lack of steering wheel controls for anything other than cruise. Those two qualms can be fixed by a trip to the options sheet, though be careful how many boxes you tick: the Latitude’s starting point of $24,990 can quickly rise to beyond $30K, at which point other options become much more attractive. The only item I’d consider a “must-have” is the $1,795 3.2-liter V6, because the four-banger simply isn’t up to the task of hauling the Cherokee’s mass around.

While it’s not the well-rounded proposition its bigger brother is, the Cherokee certainly still holds its own. Its big-car weight lends it big-car composure over long stretches; the only elements that truly let it down are an unwilling four-cylinder powerplant and a transmission with a few too many gears. One (or, fingers crossed, both) of those issues might be rectified with its upcoming mid cycle refresh, at which point the midsize Jeep might become a true contender for top dog in the Alamo rental aisle. 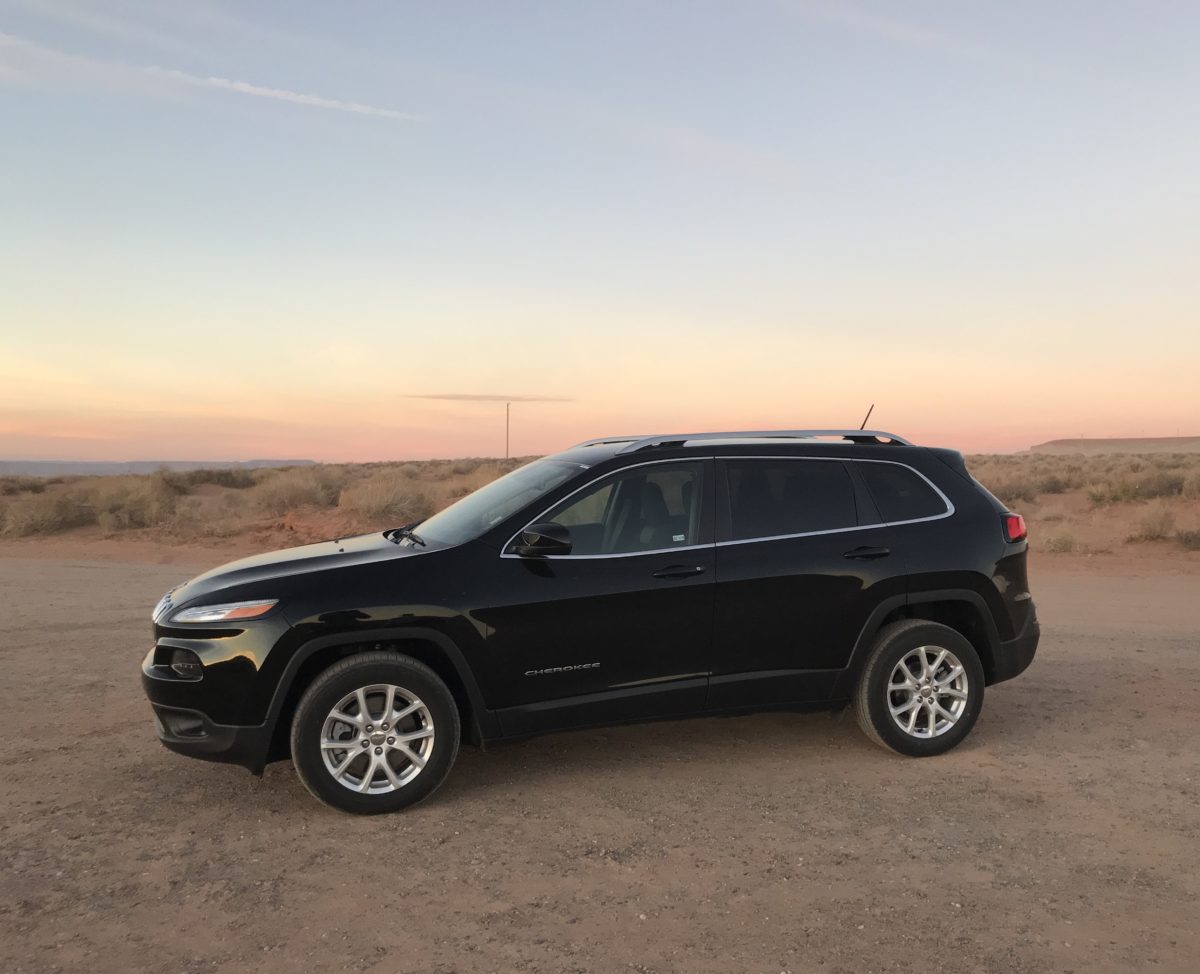