I’ve preached the gospel of rental company Sixt on these pages before, though a recent trip home to Florida afforded me yet another opportunity to test the company’s mettle and see what sort of untraditional rental fare I would end up with. So far I’ve had just one miss in five swings with the German-based company, with the miss coming in the form of a dismal Fiat 500L in Italy. On the plus side, at least that mini-minivan was a manual – and I was in Italy, after all. Things weren’t that awful.

Regardless, I placed a hold on an “LCAR” class vehicle – stated on their website as a Mercedes-Benz C-Class, Jaguar XE, Cadillac ATS or similar – grabbed my bag, hopped a Sprinter van to Sixt’s off-site digs, and was pleasantly surprised by an upgraded, XCAR-class Volvo S90. While certainly not as sporty as the LCAR offerings, the S90 would (hopefully) provide a calming respite from the stop-and-go of Tampa’s suburban sprawl. There are neither hills nor curves to be found in the Tampa Bay area anyway, so I wasn’t going to miss the lessened handling prowess. 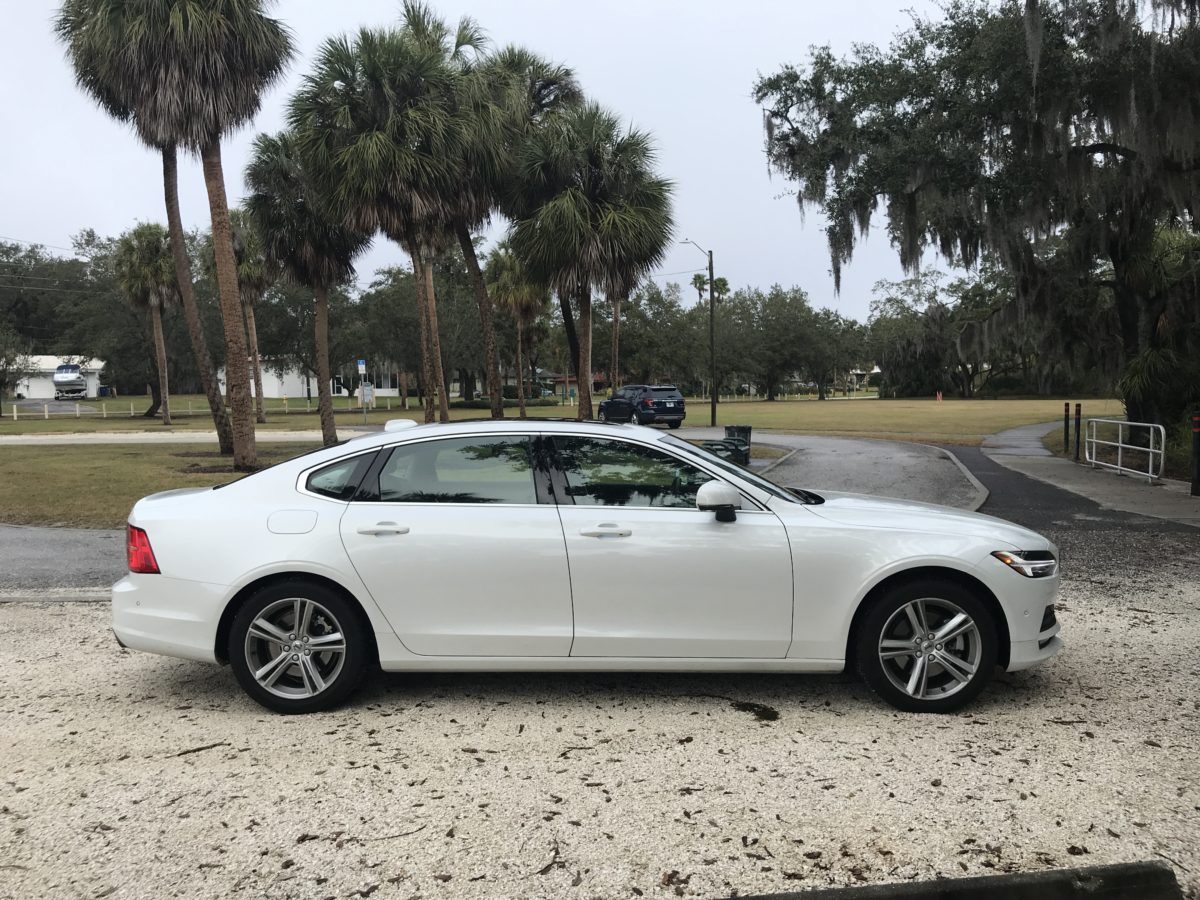 This rental’s donut-sized alloys aside, the S90 is clearly a product of Volvo’s recent design and engineering renaissance – due in no small part to an infusion of cash from its Chinese owners, Geely Holding Group. When the company scooped up the faltering Swedish brand from then-owner Ford in 2010, few would have predicted the drastic product revival that would follow a handful of years later. Now, the brand delivers two of the US market’s only wagons in the form of the fantastic-looking V90 and new V60, as well as a slew of stylish crossovers, the S60 sedan, and the S90 seen here.

Released for 2017, the Swedish-built version of the S90 lasted just one year in the US, with this long-wheelbase model replacing it for 2018. An extra five inches now separates the front and rear axles, contributing solely to rear passenger space. It makes a ton of sense in China, this model’s final assembly point, where rear legroom is tied directly to prestige. In the US, it’s unlikely that all that space is going to be properly utilized by the retired college professors likely to park a new S90 in their driveway. When it’s not indulging your chauffeur fantasies, this Volvo’s interior is still a stylish and sybaritic place to spend time. 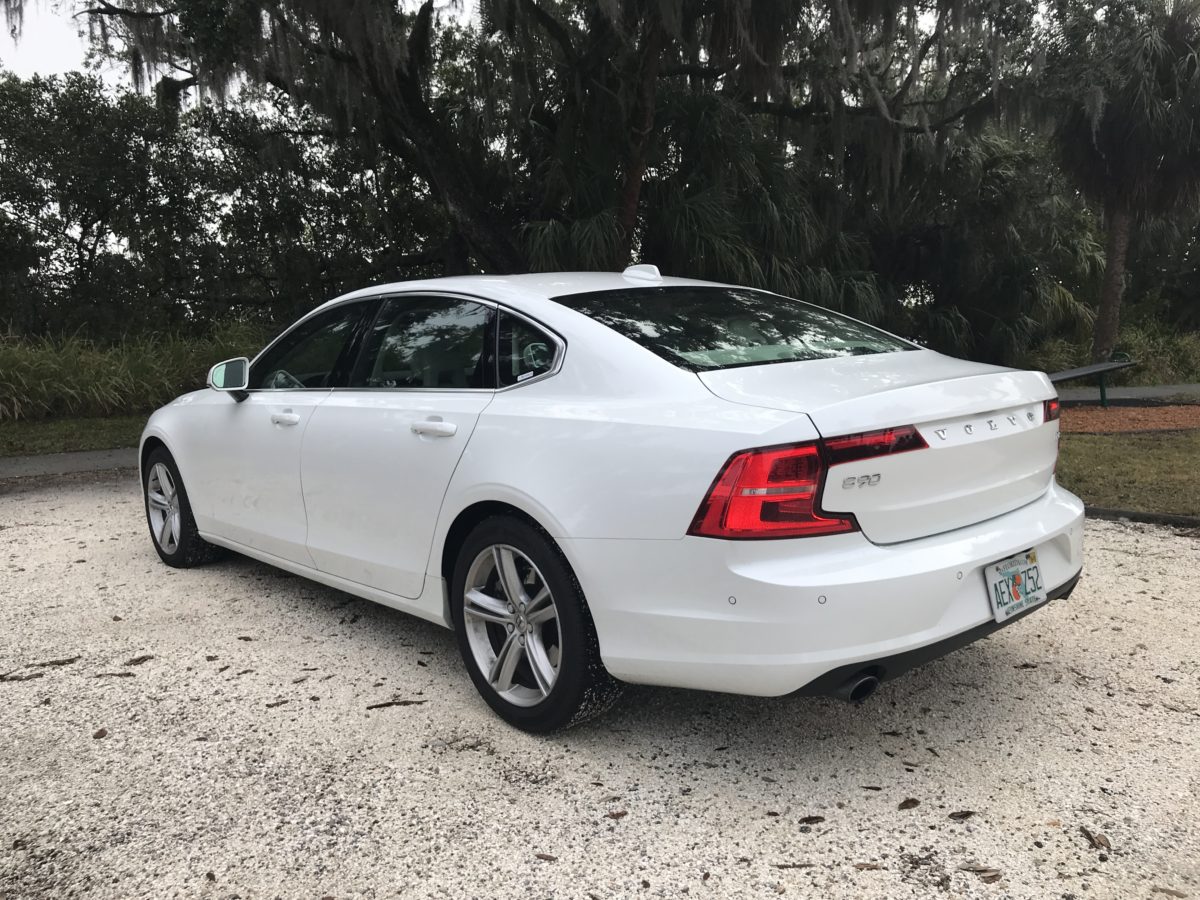 The cabin design, consisting of light and earthy tones, a digital gauge cluster, and a waterfall center touchscreen arrangement, feels familiar across Volvo’s modernized lineup, and it works surprisingly well. The dash houses a half dozen or so hard buttons, steering wheel controls, the light switch, and that’s about it – everything else is managed by screens, and they’re responsive enough to avoid frustration most of the time. There’s a labyrinthine menu structure at work here, but the bulk of what you use most often is easy to call up. The seats are typical Volvo; supremely supportive and comfortable over long hauls. 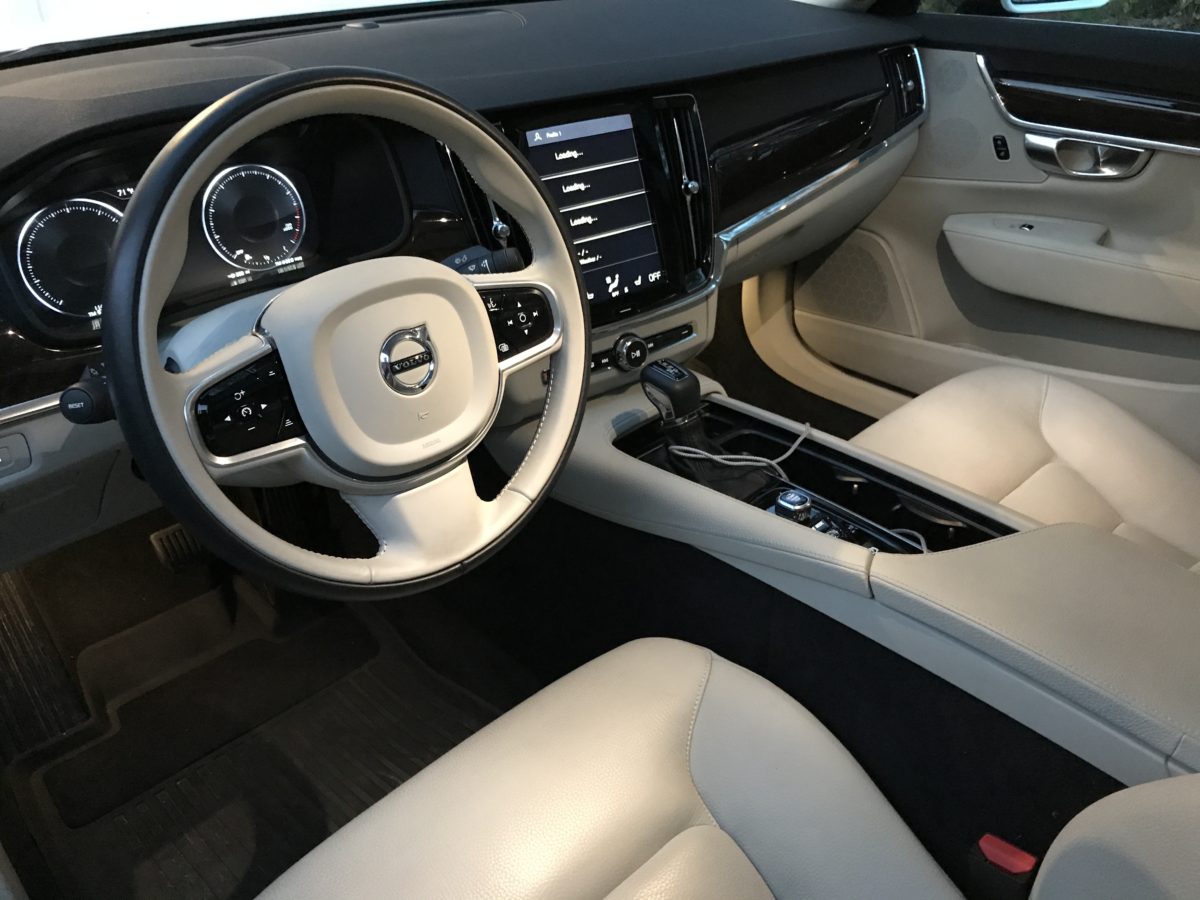 It’s not all roses, though. There are cheap materials to be found in here, mostly in the door panels and lower reaches of the dashboard. At the end of the day, the S90 has to fend off redesigned E-classes, 5-series and A6s for a slice of the pie, and while comfortable and nicely designed, in terms of execution, it just doesn’t feel as upscale. 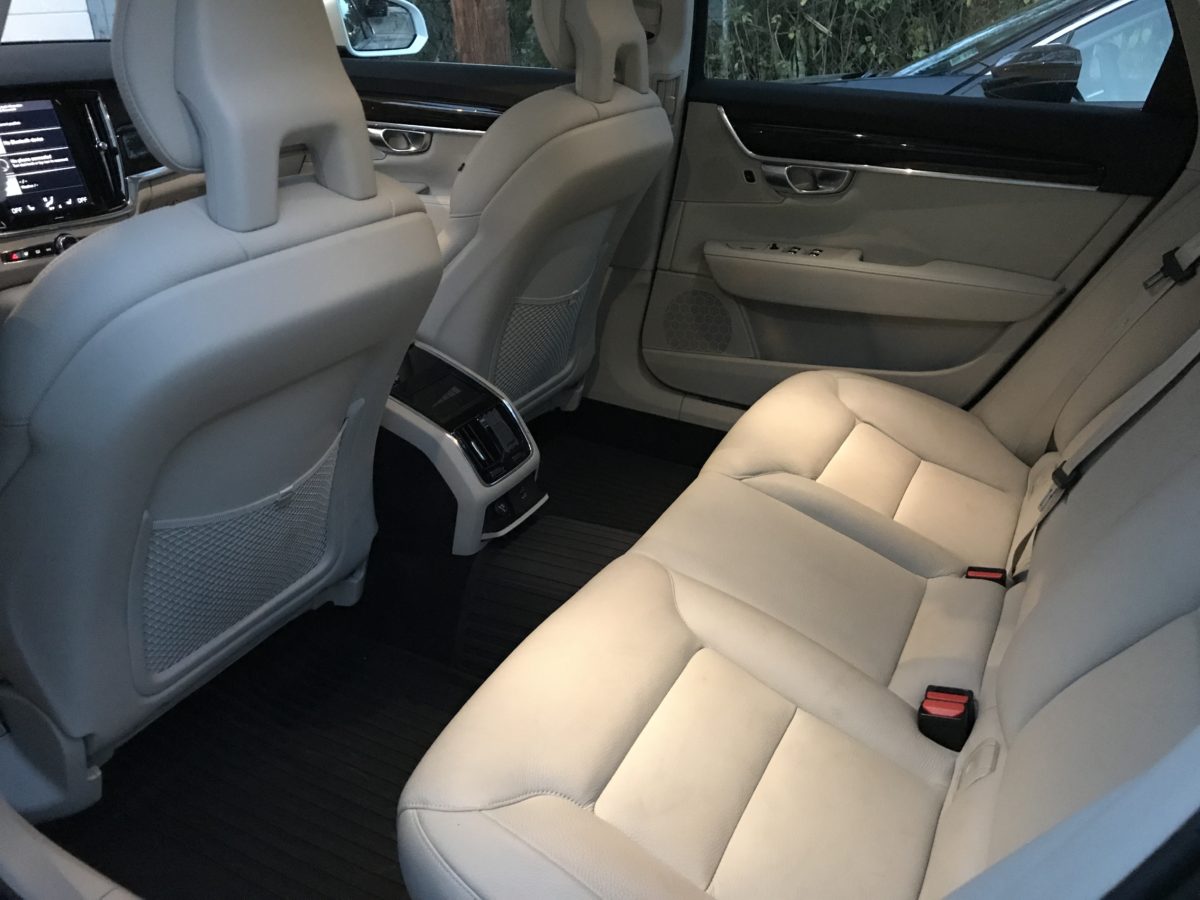 The S90’s powertrain and chassis also seem to have skipped finishing school. The two-liter four-cylinder sounds alternatively gruff or gritty depending on where in the rev range you are, and the stop/start system lights the engine off with a shudder whenever it’s summoned back to life. I found no easy way to keep the system from engaging every time the car was restarted, despite numerous attempts at changing the settings within the main menu. A single toggle switch near the ignition or on the console, the way many manufacturers handle these systems’ operation, would be much appreciated here. 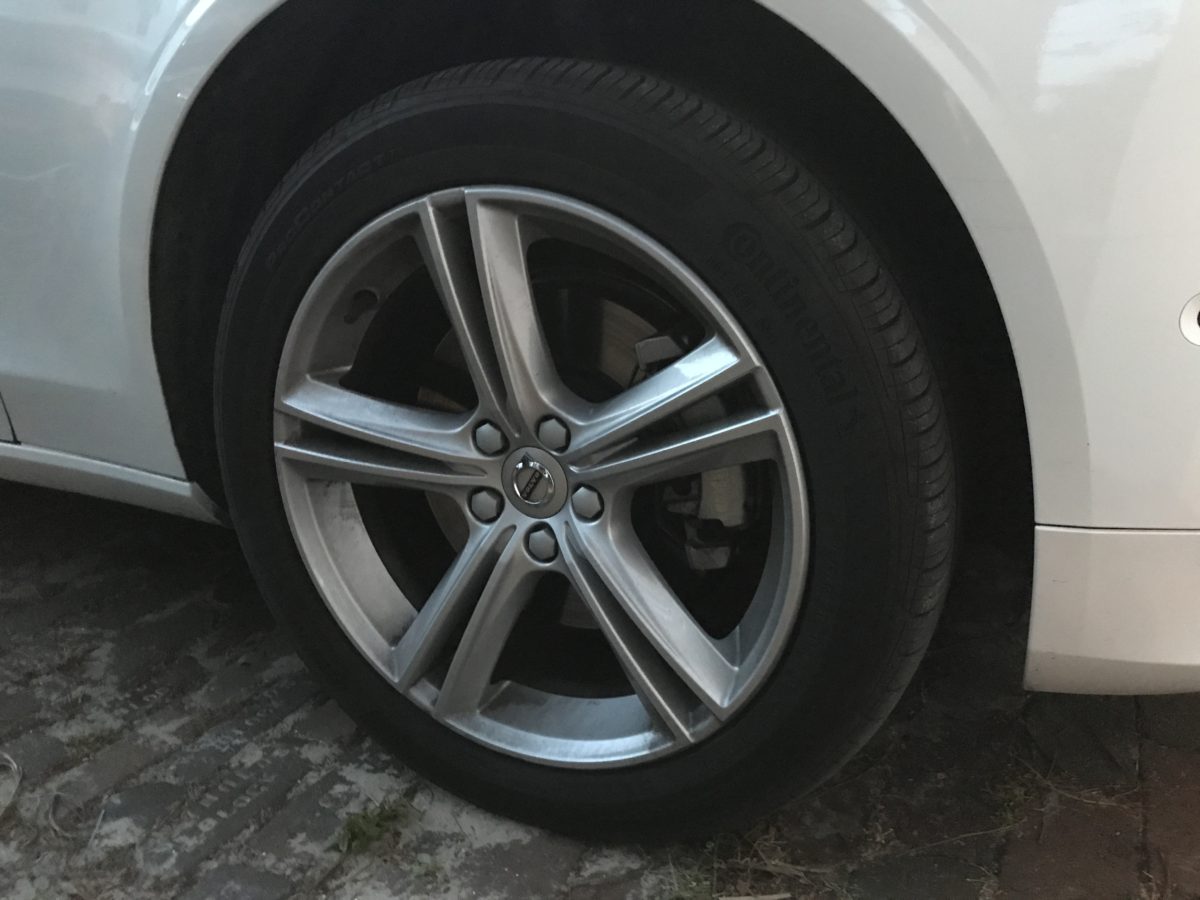 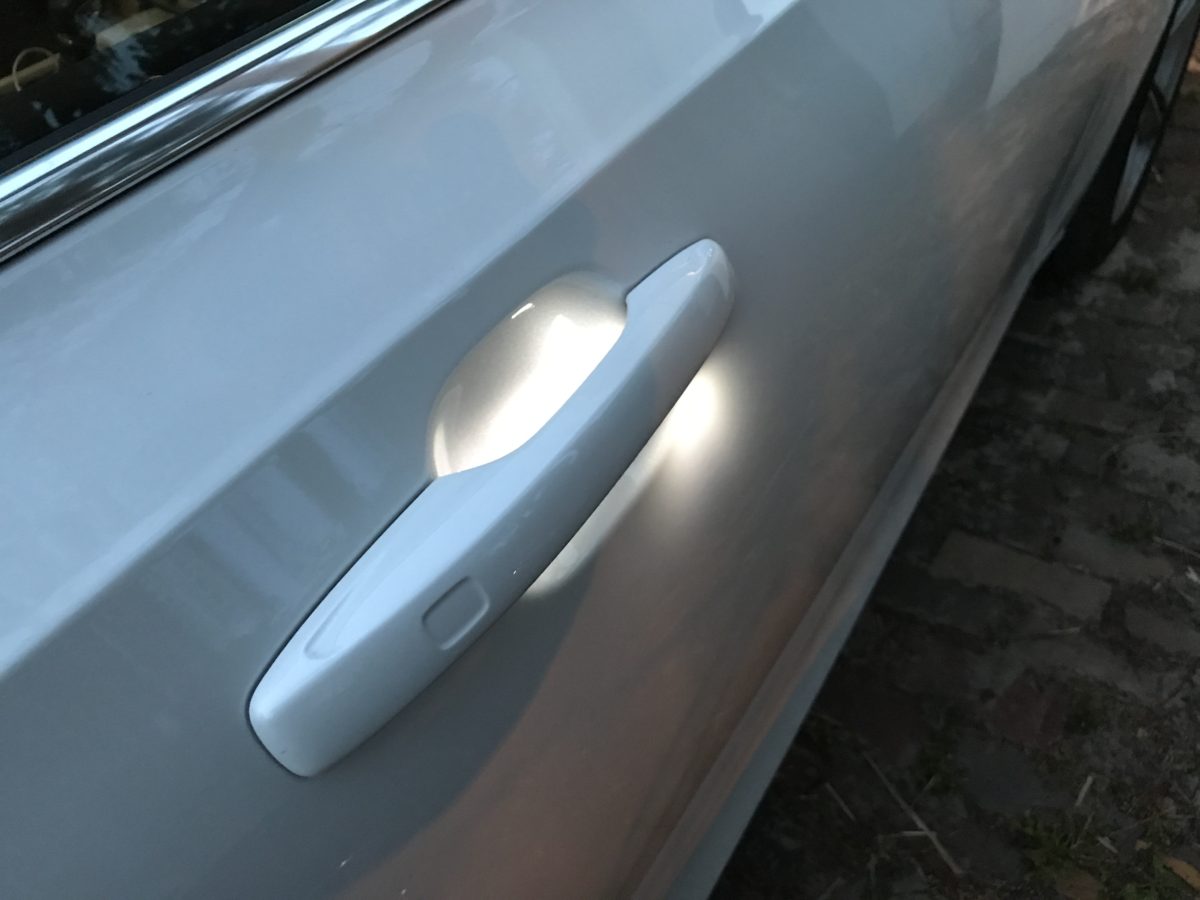 Similarly, the ride is one massive sharp edge in need of polishing. I incorrectly assumed that the poverty-spec 18s this example rode on would at least redeem themselves by providing a softer ride, courtesy of those thick tire sidewalls. Sadly, this was not the case. The ride still exhibited the crashy behavior that other press outlets have decried in loaded T6s wearing the optional 19- and 20-inch wheels, without much discernible handling benefit to speak of. The S90 obeys orders, but it doesn’t beg to play.

Speaking of the T6 model, Sixt might rent the twin-charged, 316hp midrange model (the rare, plug-in T8 with 400 combined ponies rules the roost), but I didn’t pull those keys from the motor pool. Instead, the four-cylinder powering my rental had just one method of pressurization – a turbocharger – and twisted all four wheels with 250 horsepower and 258 lb-ft of torque. While not particularly noteworthy, those numbers are on par with other entry powertrains in this class. Still, with over two tons to motivate, it’s surprising that the S90 feels anything other than sluggish. And yet, at no point does the T5 feel underpowered. The four suffers from a brief moment of lag off the line, but the torque builds quickly from 1500 RPM on, and the gearbox has eight well-spaced ratios that get shuffled through fast enough to shrug off the S90’s portliness. 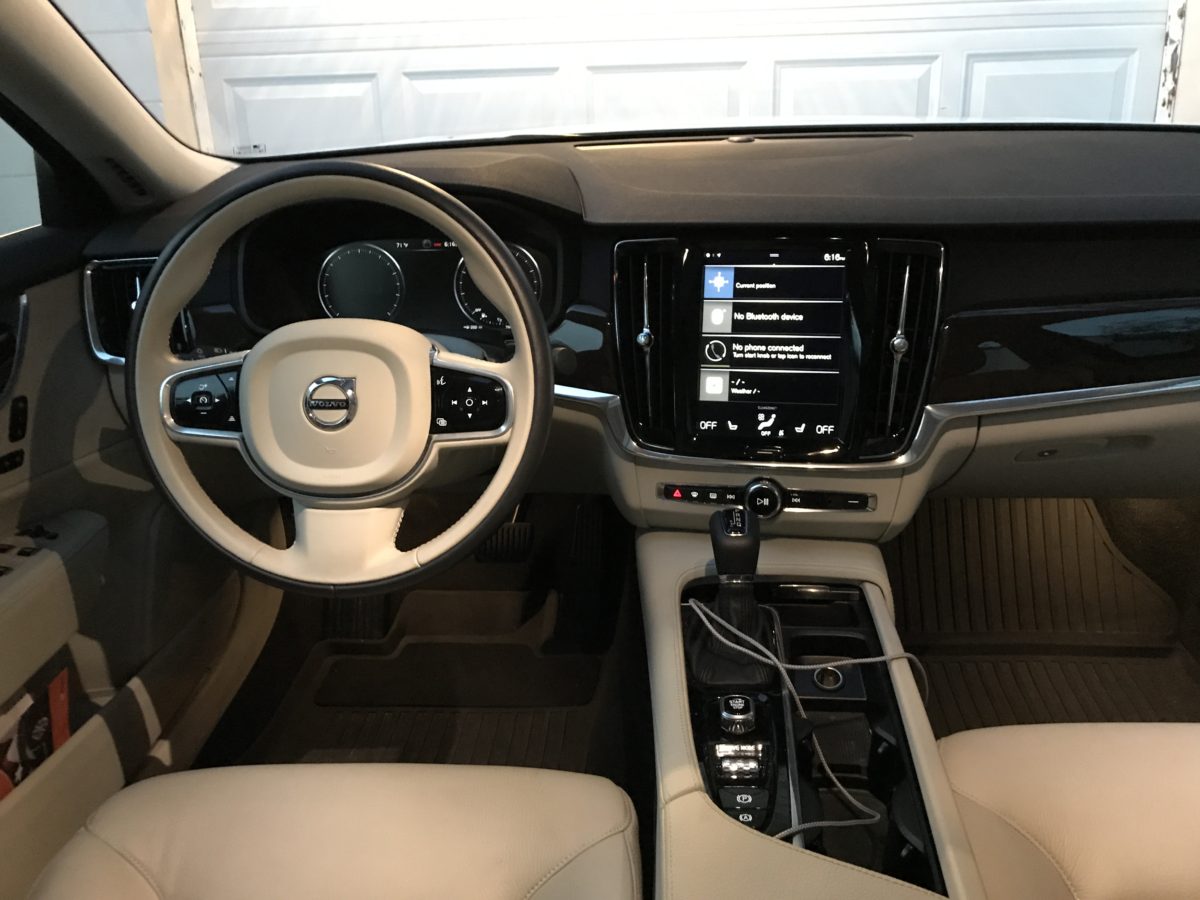 There’s a thornier question at play here besides simply whether the S90 T5 is worthy of fifty to sixty thousand of your hard-earned sedan bucks or not. And that is, can you grapple with the geopolitical questions raised by spending that much for a “made in China” label? China’s new car market is a burgeoning one and yet, the S90 is one of just a handful of models on sale in the US that are built there and imported in. If the current administration makes good on its threat of levying huge import taxes against our economic rivals, there’s a distinct possibility that the S90’s sticker price will be negatively impacted – erasing the price advantage it holds over more established nameplates. Of course, German-built competitors aren’t likely to be immune to this political chest-thumping either.

Politics aren’t the name of our game here at S:S:L. We care about cars. And I, personally, care a lot about rental agencies who keep interesting cars in stock. That’s not a paid endorsement; I forked over $44.95 a day for the privilege. That being said, if Sixt wants to throw me some free rentals in exchange for this influential post, all the better. In the meantime, I’ll continue playing European sedan roulette with them and hoping the results keep returning vehicles like the S90. While it’s not without its flaws, the Volvo presents a compelling alternative to the sea of big-name German sameness that gets churned out generation after generation. Regardless of where it’s screwed together, that’s something worth respecting. 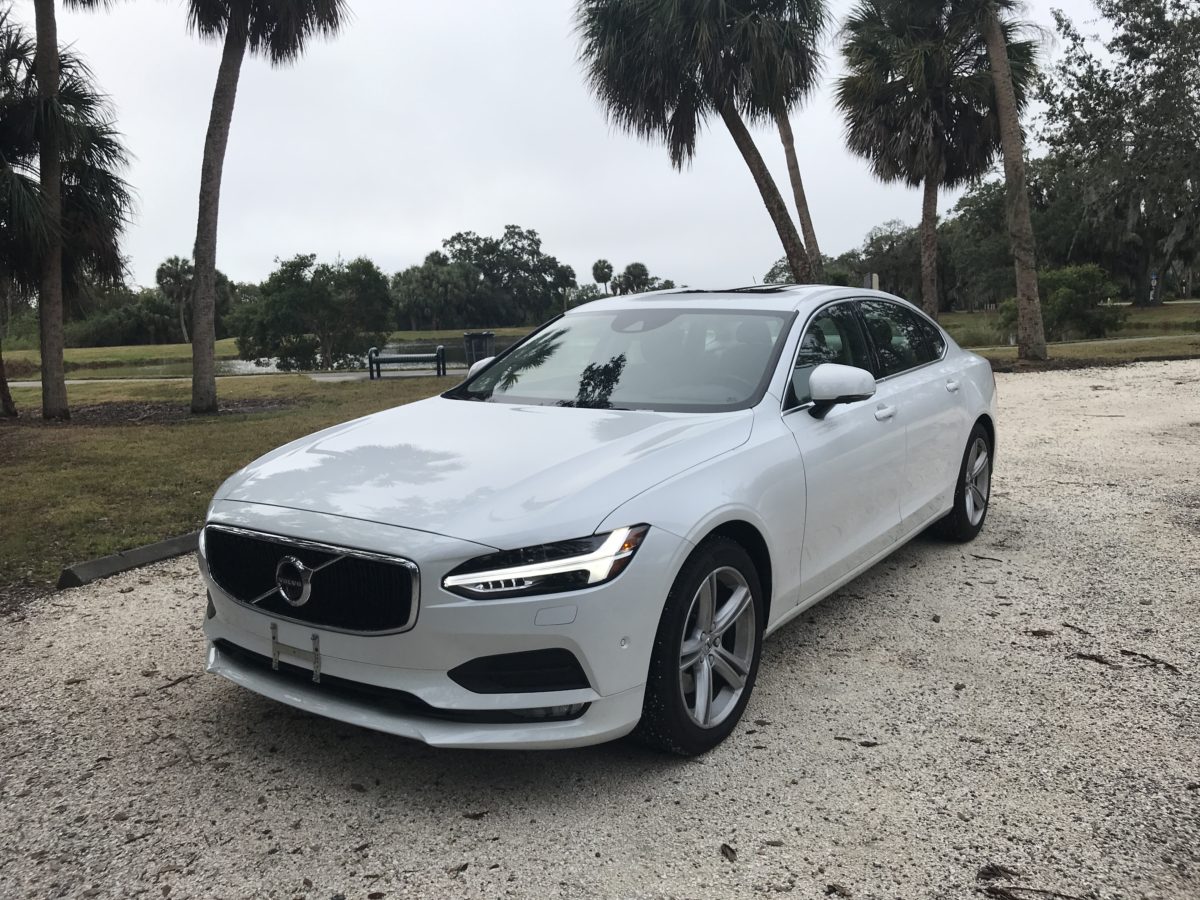