Hindered by its low electric-only range and the high price of entry, one has to look hard to find the value. Still, the Countryman S E All4 might be worth a look for environmentally responsible buyers wanting to stand out amongst a sea of Priuses.

Driving the Countryman S E All4 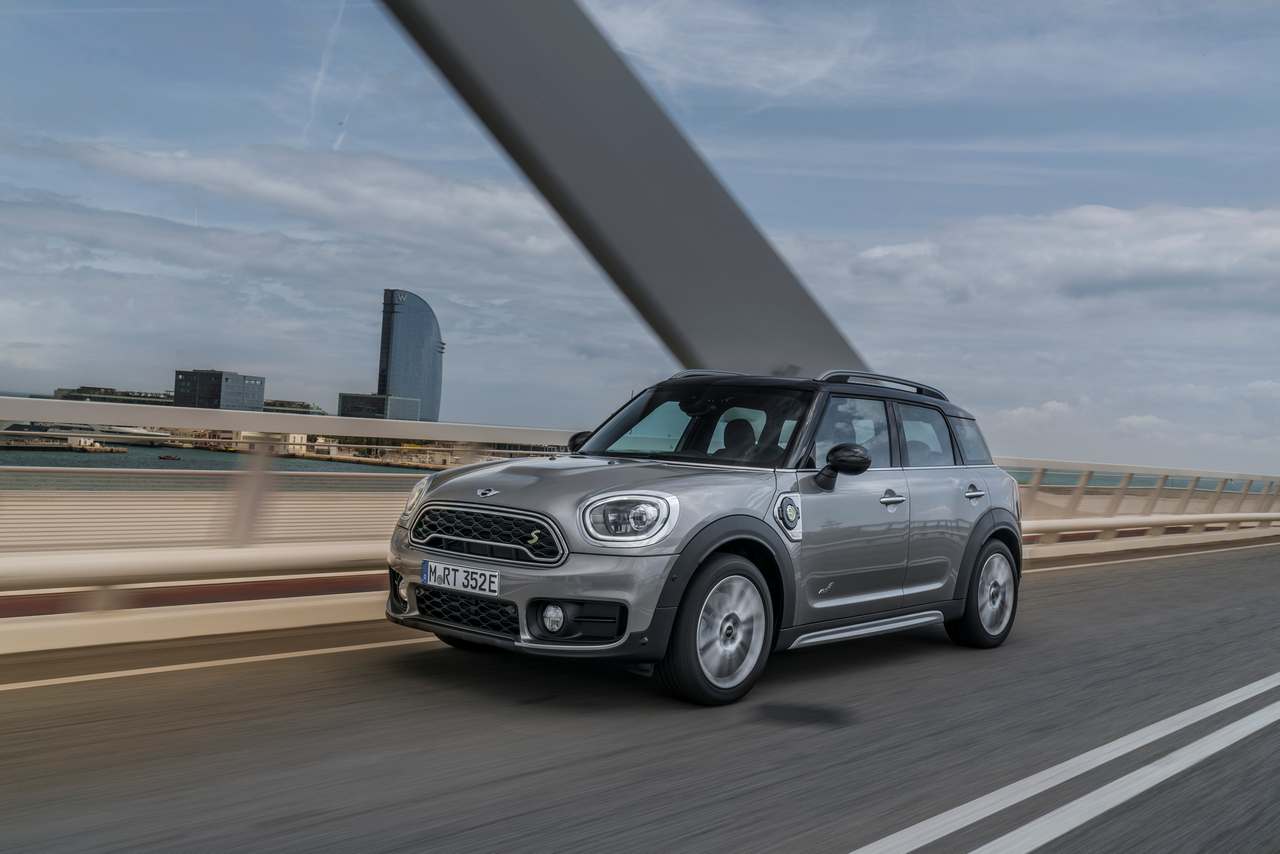 The Countryman S E All4 is the largest and heaviest model in the Mini lineup, but the car is still a blast to drive like all the rest of the lineup. The softer suspension and higher CoG make the Countryman pitch a bit into corners, but steering is fantastic and gives the driver a lot of feedback.

Despite the softer suspension, the dampers do feel like they are overly stiff on anything but the smoothest roads, and the short 105-inch wheelbase amplifies the questionable suspension tuning decisions. It would be nice to have the option of an adaptive suspension here, especially given the Countryman’s sporty S designation. 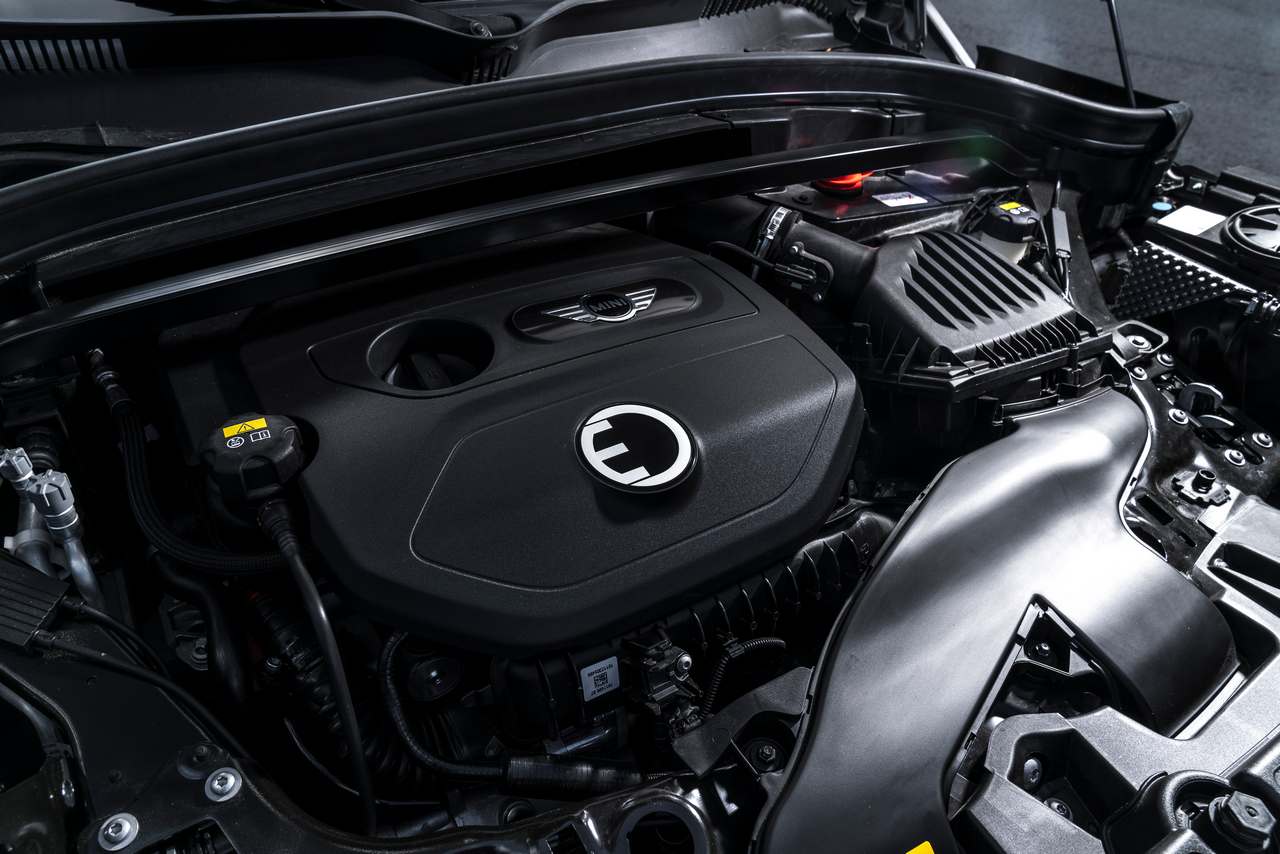 A 134-horsepower, three-cylinder turbocharged engine delivers power to the front wheels, while an 87-horsepower electric motor powered by a 7.6-kWh battery powers the rear wheels. Combined, the Countryman S E All4 has a rating of 221-horsepower and 284 lb-ft of torque. The electric motor gives all of its 122 lb-ft of torque at 0 rpm, making the Countryman S E All4 feel a lot faster off the line than actually is. At a hefty 3950 pounds, 0-60 is closer to the 7-second range. Not exactly a rocketship, but the electric motor makes it feel quick.

Being a PHEV, one would expect the Countryman S E All4 to shine when it comes to fuel economy but, unfortunately, falls far short of expectations. The tiny battery only provides a 12-mile range at best on full electric (eDrive), though I could never seem to get more than 9-miles of range out of it.

Keep in mind that on a standard 120v outlet, you are looking at 12+ hours for a full charge, only to get 9-12 miles of all-electric range. The Countryman S E All4 has an EPA rated 65 MPGe on battery/electric power, and 27 mpg city, 28 mpg highway, and 27 combined on gas power alone. These are not numbers to get overly excited about for a PHEV. 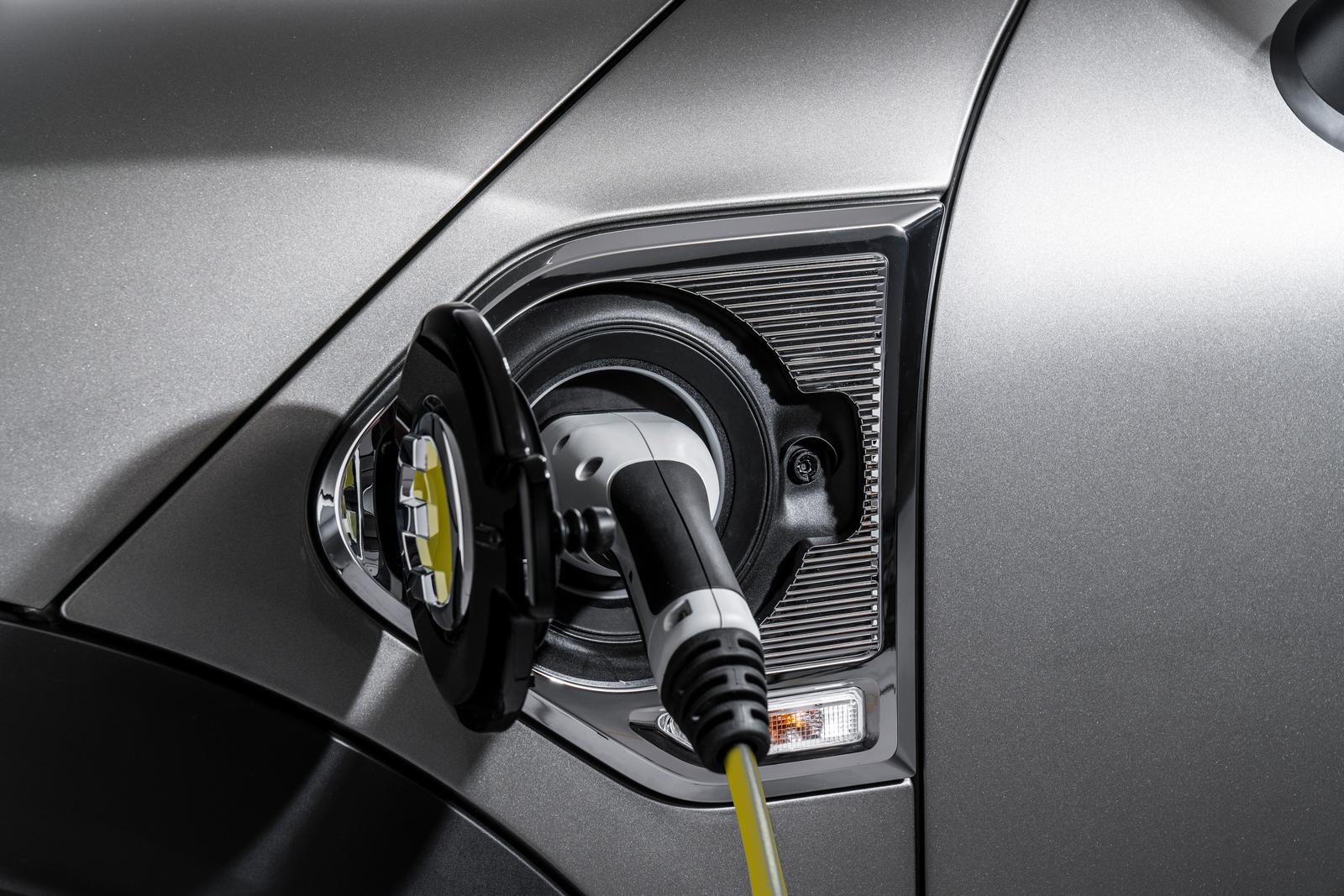 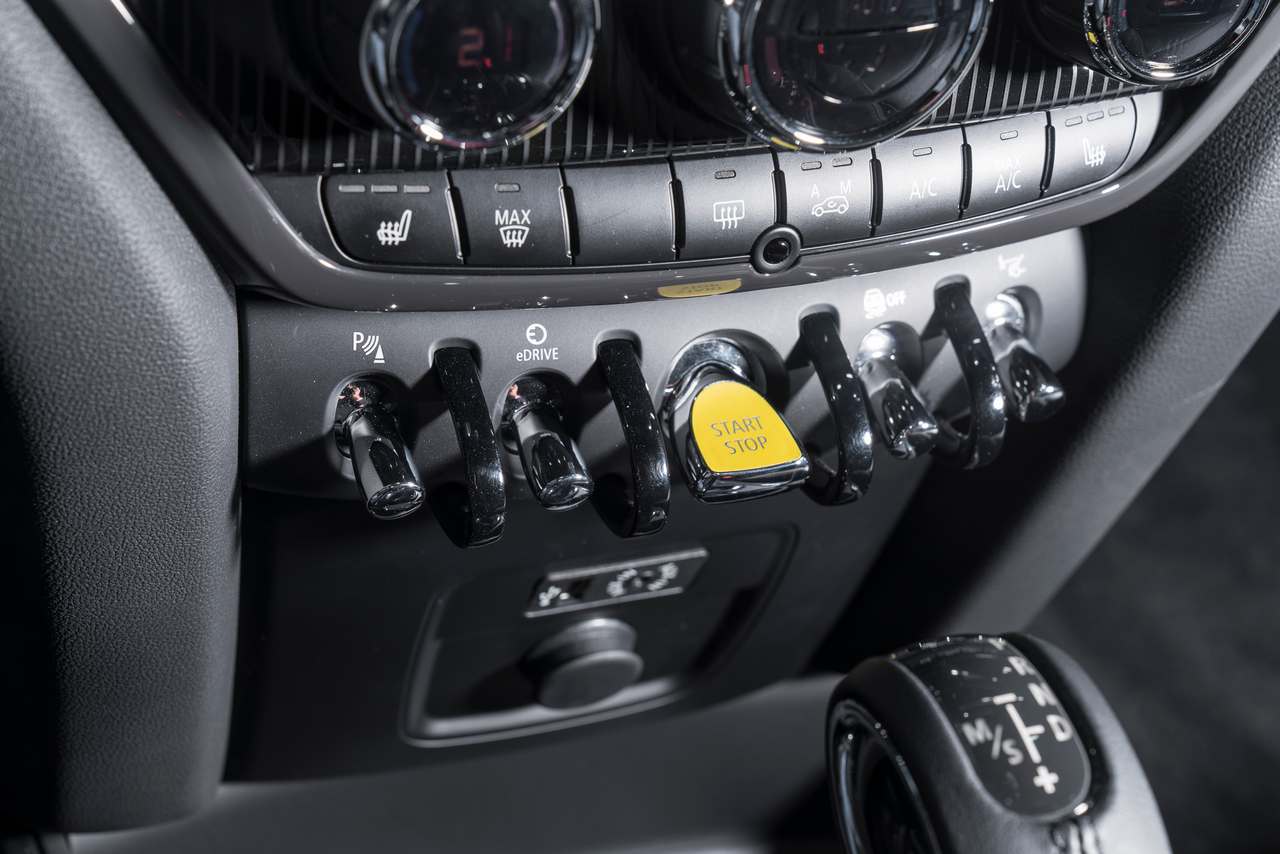 Further compromises had to be made by shrinking the fuel tank to a tiny 9.5 gallons to accommodate the battery. The smaller tank gives the Countryman S E All4 a range of around 270 miles on hybrid power, vs. the non-PHEV Countryman S All4 which can do 418 miles on a tank. That’s an entire tank of gas to get from Houston to Dallas, and that’s with the fuel light warning you of being in the danger zone for the latter part of the trip. 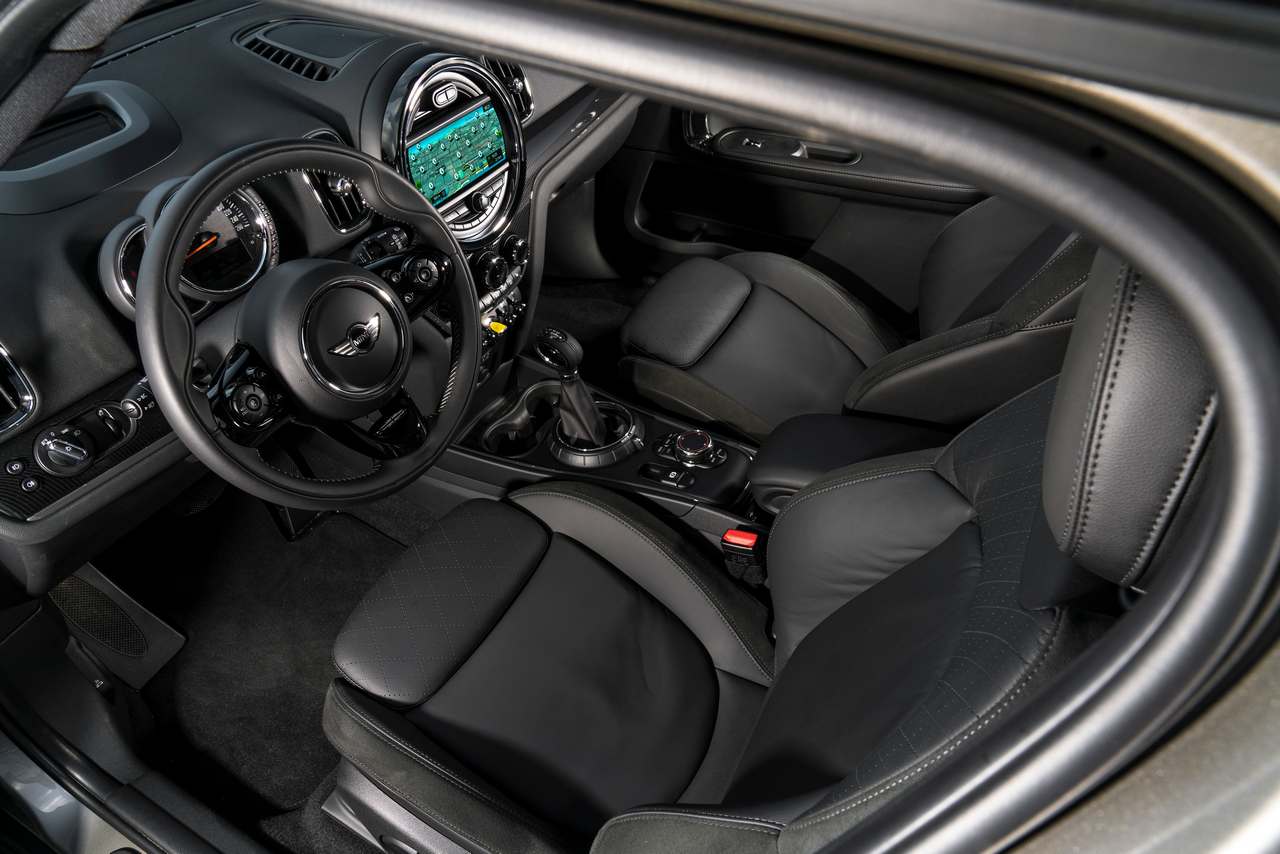 The interior of the Countryman S E All4 is pure Mini and retains all of the quirkiness that makes the brand so iconically fun. The round motif is carried throughout the interior, from the instrument cluster to the center screen and HVAC knobs. The toggle switches below the HVAC are also iconic and a nice touch. The Countryman S E All4 gets a yellow start/stop button, as well as a toggle to control the eDrive functionality.

Six-way manually adjustable cloth and pleather seats are standard in the Countryman and are quite comfortable for extended driving. The rest of the Countryman’s interior feels cramped, despite its size, and has very little by way of storage areas. Controls are generally easy to use, though the knob placement to control the infotainment could be located a bit more forward for increased comfort. I’m not a fan of the Infotainment system, which seems overly complicated and never quite had the right combination of information and settings on any given screen. The LED light band around the center screen is a neat touch and contributes to the Mini’s fun persona. 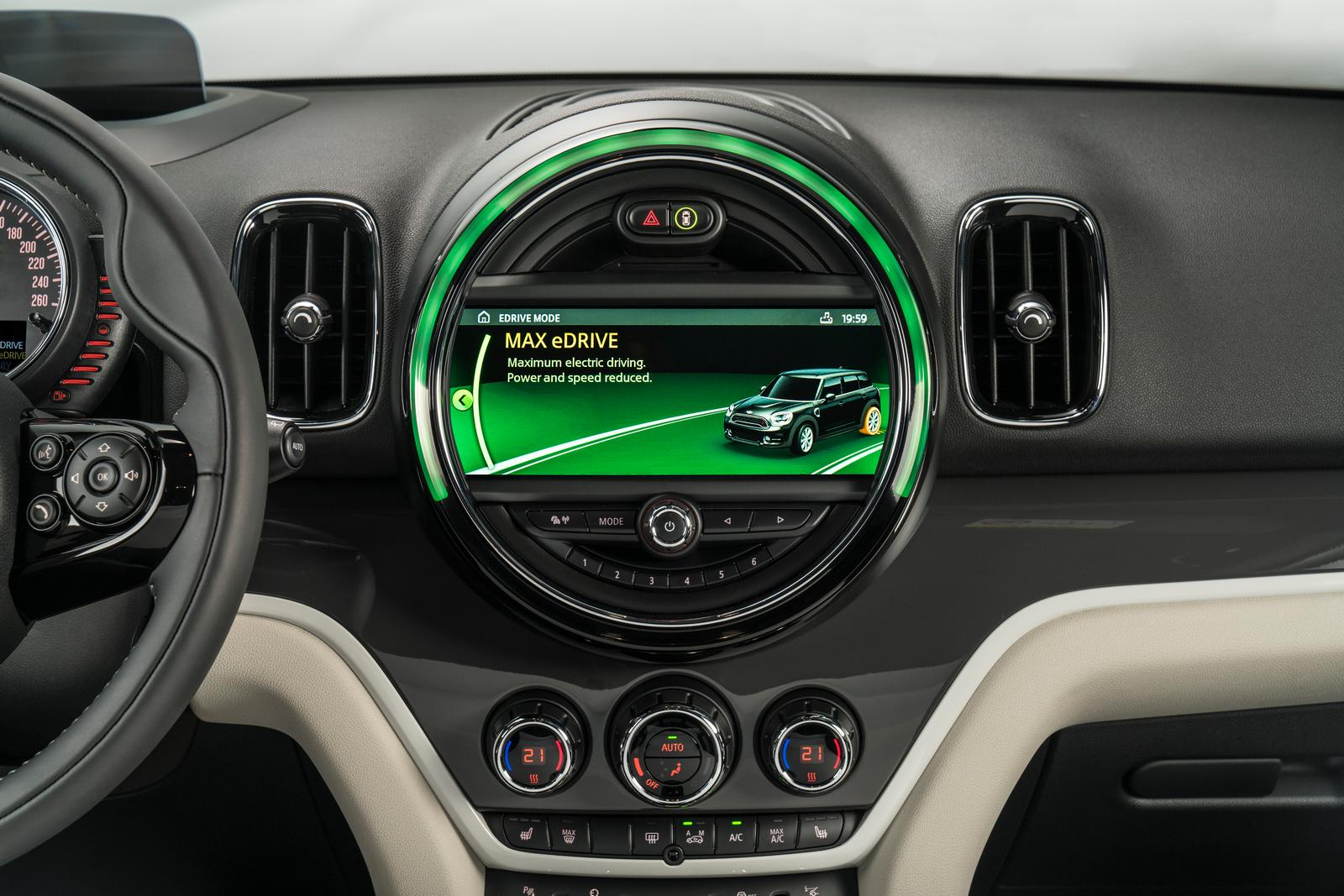 Cargo space with the Countryman S E All4 is small for its class, sitting at just 17.2 cubic feet with the split-folding rear seats up. The charging cords, unfortunately, eat away at the already precious cargo room.

Should You Buy One? 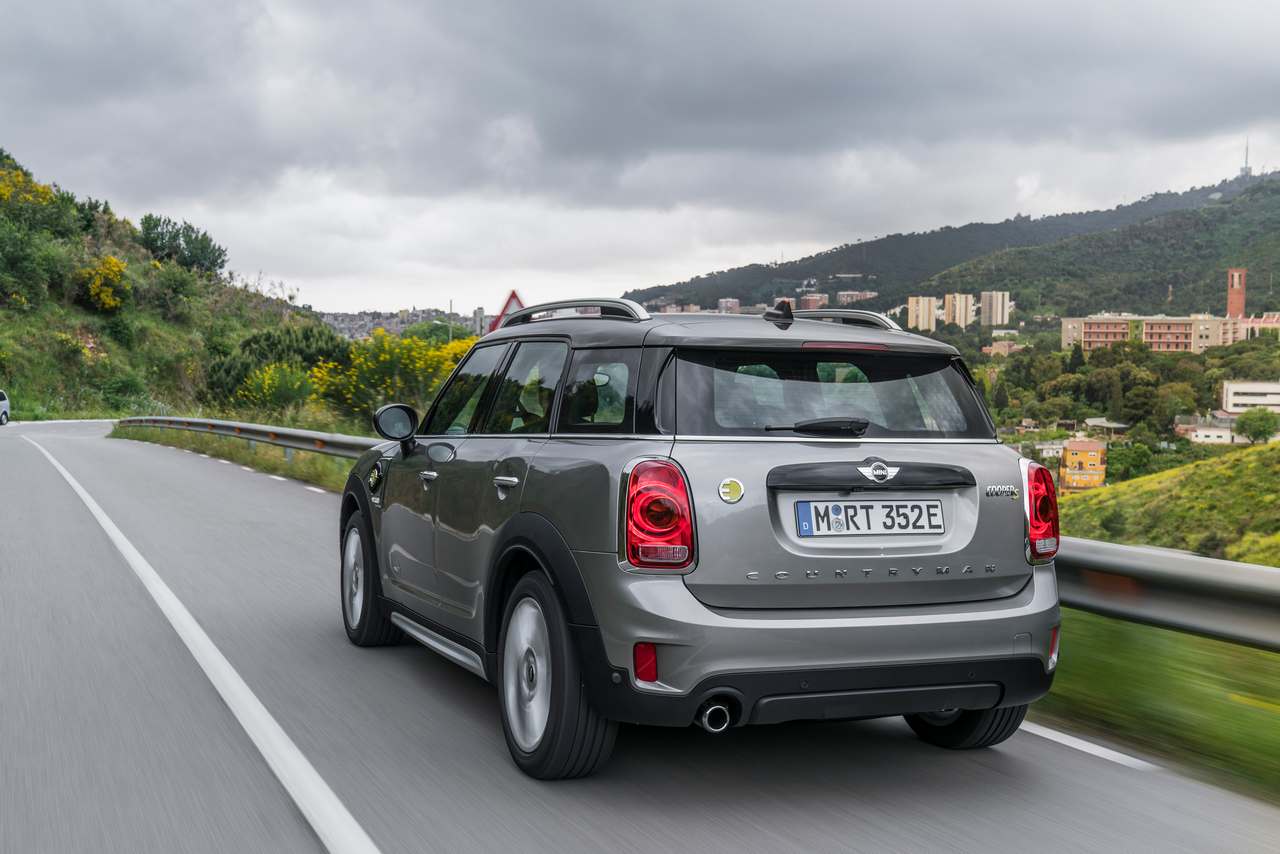 The Mini Cooper Countryman S E All4 is an interesting vehicle but comes with several drawbacks. I like the exterior styling quite a bit, but the interior feels cramped. There are quite a few tradeoffs with utility in that there is very little cargo space given the size of the vehicle. The PHEV aspect of the car seems to have very little added benefit to the driving experience given the cost differential.

Our PHEV Classic trim tester has a base price of $36,900, vs. the Gasoline Classic trim base price of $31,900. That’s $5k extra before any options. Sure tax credits will eat away at that difference, but there is still no overwhelming reason to buy the PHEV Countryman S E All4 over the gasoline-only version. Hopefully, the upcoming all-electric Mini 2-door can be the genuinely groundbreaking EV that the S E All4 isn’t.

Our advice? The normal Countryman S All4 is a fantastic vehicle and a lot of fun to drive. Save yourself some dollars and trade-offs of the PHEV model, and buy the gasoline-only model.

Vehicle loaned to Speed:Sport:Life by Mini with a full tank of gas for the purpose of this review.