You don’t own an Aston Martin Vanquish, you’re not independently wealthy, and you don’t have a week to kill driving across country in the BullRun or the world in the Gumball 3000 (nevermind the $120,000 entry fee –you read that correctly, 120 large). However, you think you would enjoy the experience of driving side by side with some choice exotic machinery and competing in a high-end rally event. This is where Targa Trophy
comes in. A one day, reasonably priced, rally experience for exotic cars.

END_OF_DOCUMENT_TOKEN_TO_BE_REPLACED

Racer Boy: NASA Performance Touring –Road racing with whatever you got in the driveway.

You’ve always wanted to get into road racing but you don’t own the requisite Spec Miata or Spec E30. No problem. The National Auto Sport Association (NASA) has you covered. Their Performance Touring class allows just about any four wheeled production car to run in their series. Using a system of points based on modifications allows almost any car to be equally competitive in a multi-class system. So forget the excuses, take the back seat out of your Mom’s Buick and start welding in a roll cage. Chances are NASA is holding a race in the next few weeks at a track somewhere right around the corner from your house.

END_OF_DOCUMENT_TOKEN_TO_BE_REPLACED

Racer Boy: Coursemarker/Gimmick Rallyes – How to drive around lost for three hours and win a trophy doing it.

You want to get involved in some sort of motorsports but you’re dead broke and the car you’re driving has 90 horsepower on a good day, and that’s downhill. You’re in luck! There is an event perfect for you. Enter a Coursemarker/Gimmick Rallye, where the challenge isn’t who has the best ride, but who has the best mind. Coursemarker/Gimmick rallyes are events where a driver and a navigator use a set of instructions to drive through a predetermined course on public roads. The instructions are littered with gimmicks to trick teams into driving on the “incorrect” course as opposed to the “correct” one where points are gained by finding coursemarkers. These coursemarkers may give you more instructions (and possibly more gimmicks) along the rallye. First one to the finish line is usually the loser. There is no speed component to gimmick rallyes. It’s like ole Wyatt Earp said, “Fast is fine, but accuracy is everything.”

END_OF_DOCUMENT_TOKEN_TO_BE_REPLACED

There is that car down the street that has been sitting stagnant in that guy’s front yard for way too long. The left rear tire is flat and there was a scratch down the driver’s side door that needed to be fixed by a professional. Some people are quite picky about who touches their car to fix it, so click here to find an automobile repair company. Anyway, other than that minor damage, the car appears to be in pretty good shape. Your buddy from high school, the one who got a C in metal shop, says if you buy the car he’ll weld a cage in it. You go down to talk to the guy to see what he wants for the car. His wife answers the door and says if you get “that piece of crap” out of their yard it’s yours to keep. The keys are nowhere to be found but you can utilise the services of quality locksmiths Portland Maine to sort out that issue. You just scored a car for free, but because she couldn’t find the paperwork, you can’t register it for the street. Now what? Well, the ChumpCar World Series, the endurance racing series for $500 cars, is coming to a track near your town. Grab your Costco sockets and get to work. You’re about to become a racecar driver!
END_OF_DOCUMENT_TOKEN_TO_BE_REPLACED

Most of us gearheads experienced our first competitive car race in the Pinewood Derby. A seven inch long piece of wood, four nails, four plastic wheels and a sloped track –that’s it. Gravity is the only motor in this race. At first glance it seems like there isn’t much to the Pinewood Derby. However, after getting your ass kicked your first year you realize that a Pinewood Derby car can be as complicated as any real racecar. Aerodynamics, rolling friction, center of mass, weight, alignment, lane choice, there are all sorts of things that can make the car roll down the track or get stuck halfway down the hill. Of course, as a seven year old kid you have no idea how to change the center mass of a Pinewood Derby car, that’s where dad comes along.

END_OF_DOCUMENT_TOKEN_TO_BE_REPLACED 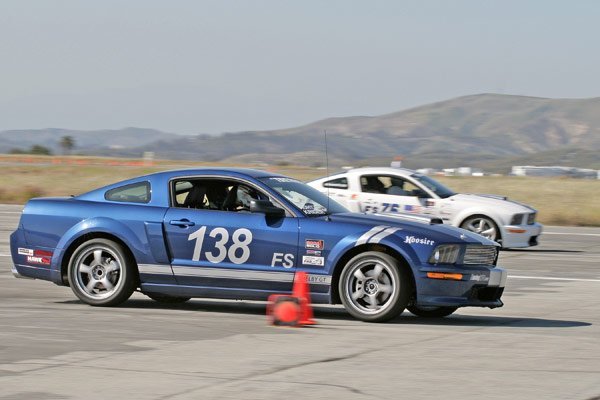 Getting tired of drag racing the same old straight 1,320 feet?  Is autocrossing around cones in a parking lot, racing against the clock, not doing it for you anymore?  What if I told you about a place where you could compete head to head against similar cars with similar modifications in a drag race format on two mirrored autocross courses?  Does the idea of blasting away from a drag race Christmas tree and then barreling into a tight turn interest you?  How about coming out of that turn and seeing your competitor out of the corner of your eye, sideways, coming out of his turn just a few feet ahead of you over on the other track?  You’ll need to push harder and run the next corner even faster if you plan on being the first car across the finish line.  Sounds pretty crazy doesn’t it?  It is absolutely fantastic competition.  It’s called Pro Solo, and it’s drag racing with corners.