Long considered little more than a Ford Edge in fancy clothes, Lincoln has gone to painstaking levels to differentiate the latest...

With competition in the large luxury SUV class heating up once again thanks to a recovering economy and falling fuel prices, Infiniti has glossed up its QX80 model for 2015 to battle the likes of Cadillac, Range Rover and Lexus.

END_OF_DOCUMENT_TOKEN_TO_BE_REPLACED

You could be forgiven for thinking it’s a bit late in the Lexus RX’s model life cycle for us to review it; after all, these pages are usually devoted to freshly restyled or all-new metal. But in fact, though this platform’s basic bones stretch back to the 2010 model year, the RX received a heavy refresh for 2013 that brought it right up to date against others in the entry-level luxury crossover segment. We’ve covered the normal RX350 before on these pages, but never the full-zoot RX450h hybrid version. What makes this CUV a perennial class sales leader? Read on for a look. END_OF_DOCUMENT_TOKEN_TO_BE_REPLACED

Avoidable Contact #30: Prius is very iPad! Prius is real luxury! HS250h is more like a Sears Tele-Games! You’ll buy anything! 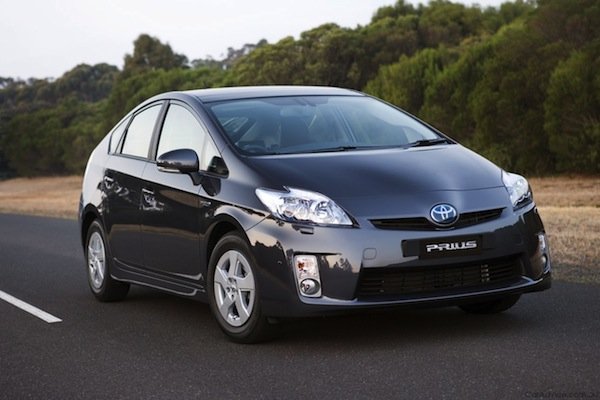 As I write this, it has been fourteen hours since Apple’s Steve Jobs revealed the iPad to a crowd of cheering followers, er, customers, this morning. For what it’s worth, I’m in no way impressed with the new iProduct. I’ve been working with Apple systems since I hacked up a “worm race” program for the Apple ][+ back in 1982, and I am writing this column on a 24″ iMac, so I’m very far from being anti-Apple — but this new tablet doesn’t do it for me.

Not that Mr. Jobs would care. As a company, Apple is very far from being the hacker-friendly maker of expansion-slot-packed beige wedges I knew as a child. One could argue that Apple isn’t even really a computer company any more, insofar as they don’t devote a lot of attention to making computers. Instead, Apple is a producer of design-centric goods which offer little more utility than their competitors while commanding significantly higher prices. Hmm… I think that means that Apple is a luxury brand. Don’t you?

After all, “luxury” doesn’t necessarily mean Brioni suits, megayachts, or any of the verses from Carly Simon’s “You’re So Vain”. Rather, a luxury is simply something that one does not need, but that one wants, often for no other reason than the social standing or perceived prestige associated with the item. Luxury, in other words, is something that offers a boost in self-image and image within a community. The iPad will be a luxury item. Nobody needs an iPad. The functionality of the iPad doesn’t justify the price. There are cheaper, uglier, more drab devices that provide about the same utility for less money.

I would suggest that most iPad purchasers will be people who identify with the Apple brand and its cultural associations. If iPads were invisible, or if they looked exactly like Dell laptops, they would collect dust on the brightly lit Apple Store shelves. Instead, they will fly off those shelves and into the hands of people who want to be seen with the “right” product. Regardless of price. Regardless of function. Regardless of utility. Image is the key. And that is why the Toyota Prius is a successful luxury product. It’s also why the Honda Insight has cratered in the market, and it’s why the Prius spinoff, the hopelessly dumpy HS250h, is utterly doomed.
END_OF_DOCUMENT_TOKEN_TO_BE_REPLACED

Gather ‘round, everybody. I have an epic tale to tell. It’s the story of how Fake Luxury Conquered The World. There are heroes, and villains, and sweeping vistas, and if we don’t exactly have a princess cooped up in a tower, we might have a few sexually liberated young women in airbrush-mural vans. Interested? Follow along with me as we return to the dark days of the early Seventies…