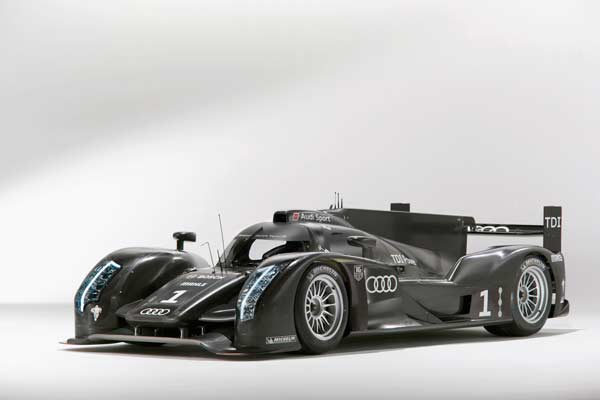 After a 2010 Le Mans season that Audi Sport would rather forget, they are back for 2011 with this all-new Audi R18 TDI prototype.   Powered by a 3.7-liter V6 TDI, Audi hopes that the diesel powered R18 does a much better job fighting the Peugeots off than the R15 and R15 Plus did.  Audi says that the chassis and aerodynamics package contains the best features and know-how of the R8, R10 TDI and R15 TDI.  As with the Acura prototypes, Audi has fitted the R18 with identically sized front and rear wheels.  Audi says this helps maintain a more balanced weight distribution.

Audi will field three Audi R18 cars at Le Mans under Audi Sport Team Joest, as well as campaigning the R18 in the Intercontinental Le Mans Cup for a total of seven endurance races in 2011.  Because the car is still very much under development, Audi will be sending two R15 TDI Plus cars to Sebring to compete in the first round of the ILMC, and plans are for the R18 to make its debut at the Spa-Francorchamps 6 hour endurance on May 8th, 2011.  The R18 TDI will make it’s only North American appearance for 2011 at Petit Le Mans at Road Atlanta on October 1st, 2011.

We wish the Audi Sport team all the luck and congratulate them on building this absolutely sinister looking prototype.  We can’t wait to see the R18 TDI run at Petit Le Mans next year!