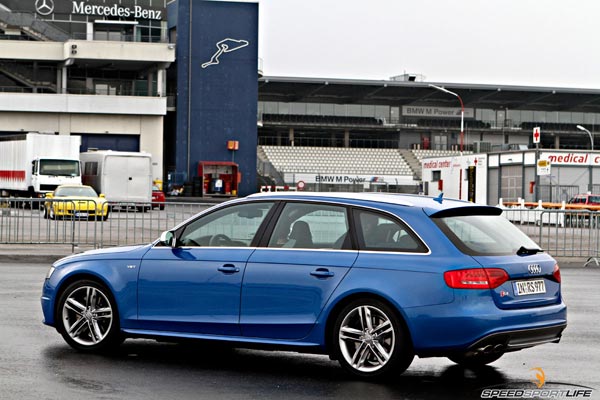 Visiting Germany had always been a dream of mine.  I studied the German language for 4 years in high school, have drooled over German cars ever since I was old enough to speak, and even love German food.  Then there’s the German girls wearing the traditional drindl outfits.  I could go on and on about the wonders of Germany and its culture.  Problem was, I had only ever heard about the wonders of Germany.  Aside from passing through Frankfurt airport, I had never stepped foot on the European continent.

One day while driving to dinner a couple of months back with my close friends Tim and Darren, I posed the question “Hey guys, you want to go to Germany?”  I was half kidding since the idea was so farfetched and random in every sense, but if anyone was going to say yes, it would be Tim and Darren.  Both Tim and Darren, like me, are car nuts and also what we like to call beer enthusiasts.  They mulled the idea of the autobahn and Oktoberfest over for about 2 minutes before answering “hell yes we’ll go.”  I was both shocked and ecstatic at the same time because this was the closest I’d ever been to actually planning a trip to Germany, and it was really going to happen.

The next night we hashed out our hotel plans and flight plans with the only thing left to figure out being our transportation.  We knew that there were a few definite things on our list of things to do such as Oktoberfest, the various auto museums, and of course the Nürburgring, and we had to do everything inside of 7 days.

I forwarded my plans to a contact at Audi of America and asked if there was any way possible to get a vehicle from them while over there.  A few hours later we received confirmation that indeed, Audi AG would be able to provide us with the vehicle that we asked for.  That vehicle was an S4 Avant, which in my mind was the perfect car to get around Germany in, and since I own an a 2010 S4 sedan in the states I really wanted the chance to experience it in its native land.

From there, we were all set.  All that was left to do was get a crash course in Germany geography and trip planning.  We eagerly counted town the days till we left, and did what we could to keep ourselves occupied at work while the time ticked by.  Finally, the day had arrived.  We boarded a plane for Frankfurt and started what turned out to be one of the most epic experiences of my life so far.  Over our 7 days in Germany, we clocked 2400km, visited 11 cities, 4 manufacturer museums and the Holy Grail for anyone who loves cars, the Nürburgring. 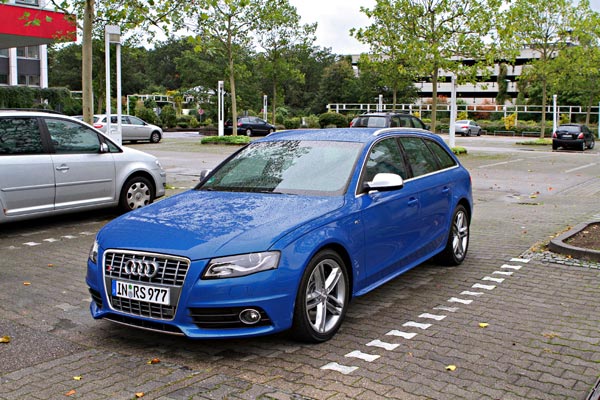 The Sprint Blue S4 Avant we picked up in Frankfurt was almost identical in spec to the S4 sedan I own with the exception of it having the S-Tronic transmission.  The  S4 Avant turned out to be the perfect vehicle for us since it was easily able to carry a week’s worth of luggage for all three of us, as well as providing an extremely comfortable and engaging driving experience during our journey.  Never did we wish we had more power or more room.  The car was simply perfect for our needs in almost every aspect, just as the S4 sedan I own delivers a nearly perfect driving experience for me here in the states.

We’ll have more on the rest of our trip and the Audi Forums and the BMW and Porsche museums each in their own future installments, but for now we’ll share our experiences with a place some of you might be familiar with; the Nürburgring.  The Nürburgring is located about 180 kilometers (111 miles or so) west of Frankfurt, Germany in the village of Nürburg.  The route from Frankfurt travels along the A3 autobahn through some gorgeous German countryside and villages.  The total journey took us about an hour and a half including a stop for fuel. 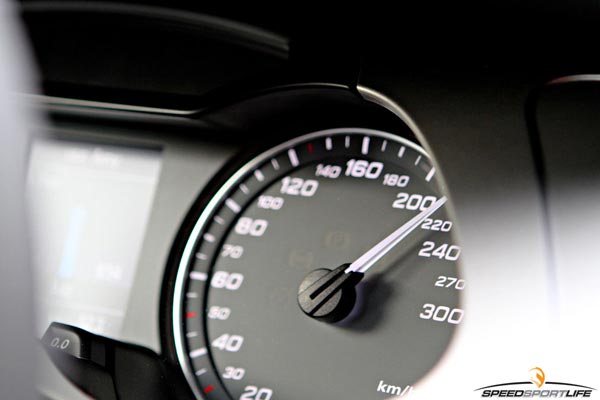 The beauty of getting up and hitting the road early is actually being able to drive the autobahn like it’s meant to be experienced since the roads were nearly empty.  Much of the autobahn is subject to a speed limit of 120 km/h, however there are zones that have no general speed limit.  It was in one of these zones that we comfortably cruised in the S4 Avant at 220 km/h (about 137 mph).  The car never felt twitchy or unstable, even at those speeds.

Feeling like king of the road out on the highway, we were soon humbled as a Porsche 911 GT3RS passed us on the left easily doing 260+ km/h.  Shortly after, we ran into a construction zone with let us get up close and personal with the GT3RS, which is absolutely stunning to see on the road.  We knew our glimpse was going to be short lived though, as we were about to come to the end of the construction zone. 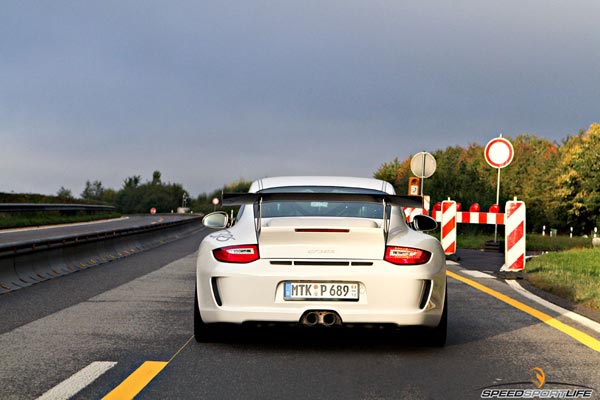 Sure enough, the moment we reached the next speed limit free zone, the driver of the Porsche put the pedal to the firewall and was in another time zone before we could even get back up to our previous cruising speed.  It was breathtaking to see a car take off like that and be completely legal!  Though he disappeared off into the distance, we knew we would probably see him again shortly.  Sure enough, he was out there all day along with several other 911 GT3RSs doing lap after lap.

We arrived at the Nürburgring at about 8:30am and made our way to the entrance for the Nordschleife.  We wanted to make sure to get there early and get our laps completed before it got too crowded.  Being that the day we were there was the only full day the Nordschleife was open to the public in September, we knew there would be quite a crowd. 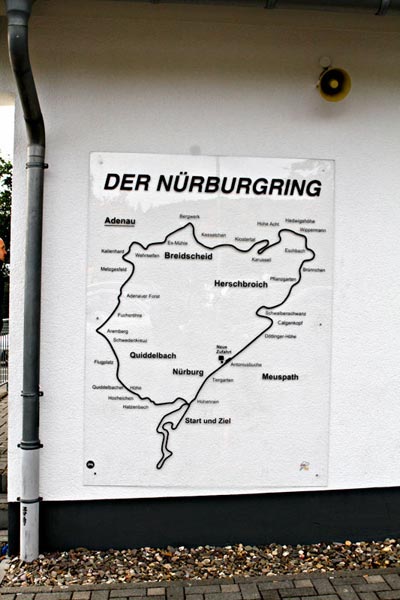 We paid our €22 “toll” per lap and headed out to run the circuit in the S4 Avant.  Driving the ring was unlike anything I’d ever experienced before.  Video games and Youtube do the circuit elevation absolutely NO justice, and some of the corners are just downright scary in person.  In addition, you’ve got every car you can possibly think of passing at a high rate of speed and within inches of your front bumper.  I’ve never been so scared and yet so excited in my life.

Since we were in a car that we were graciously borrowing, we decided to finish in one piece rather than trying to set any kind of record.  In fact, about the only thing that we were faster than out on the circuit was the tour bus.  We stayed to the right and yielded to everything we saw in our rearview mirror.  We opened the S4 up around the circuit when we could, but we were more interested in being incident free than setting any records.

It’s been a week since I drove the Nordschleife, and I still get goosebumps every time I think about it.  Not only had I survived laps around one of the most historic and demanding racing circuits in the world, but I had done so in a car that I actually own.  Reflecting back on the experience, driving the Nürburgring in the S4 is definitely one of the top highlights in the 31 years I’ve been alive.  I’m having so much withdrawl that I indulged myself in fifteen52’s Nordschleife key chain. 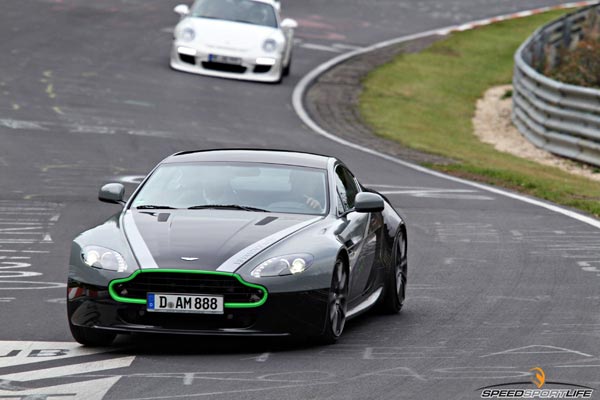 I encourage anyone who calls themselves an enthusiast to get over to Germany and do this at least once.  If you are worried about wadding up your own vehicle or having to do it in a pathetic rental, there are places like RSRNürburg or RentRaceCar.de who will provide you with a track prepped vehicle for a fairly reasonable price.  Prices start at €299 for a full day rental in a Suzuki Swift Sport, and go up to €1199 a day for an E46 BMW M3, not including the lapping tolls.

When you are done running your laps, be sure to check out Pistonspy.com to find a photo of you driving the ‘Ring.  Tony from Pistonspy was gracious enough to  provide us with this great shot of the S4 on the circuit.  Also be sure to check out his huge collection of spy photos from the ‘Ring that he updates almost daily. 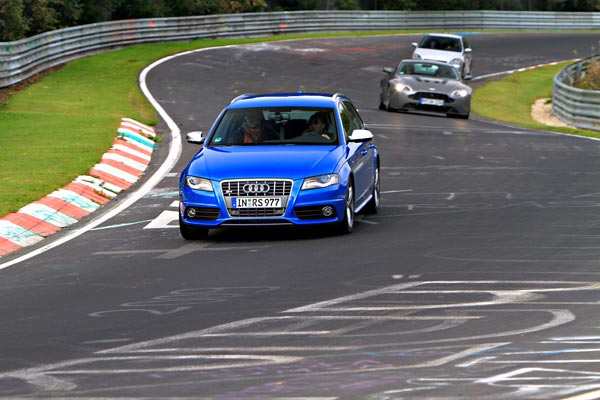 While it may sound pricey, you can’t put a price on the enjoyment and experience of driving the Nürburgring.  Get over there sooner than later and experience it for yourself.  No matter what speed you decide to go around the circuit, I can promise that you will have just as much fun as we did.

We hope you enjoy these photos from the rest of our day at the Nordschleife.