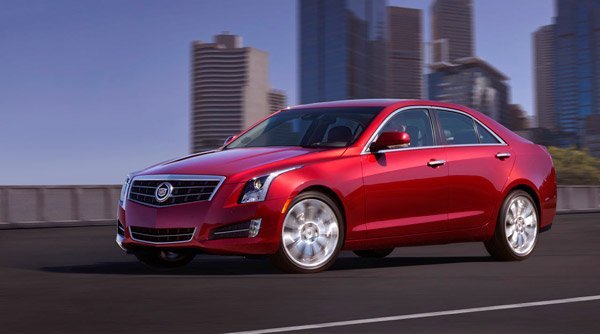 The Germans have a new compact sedan competitor to look out for with the all-new 2013 Cadillac ATS sedan.  The ATS sits below the CTS in the Cadillac line-up and is positioned to take on the class dominating BMW 3-Series, as well as the successful Audi A4 and Mercedes-Benz C-Class.

Cadillac thinks that they’ll be able to make an impact in the small luxury sedan segment by promising that the car is as much performance as it is luxury and tech.  Developed with heavy testing at the Nürburgring, Cadillac says that the ATS has a near 50/50 weight distribution, and a five-link independent rear suspension.  The ATS is nearly identical to the newest BMW 3-Series sedan, but is an inch wider.

Since the big selling factor in the luxury segment these days is tech, Cadillac has fitted the ATS with the new CUE infotainment system.  CUE features connectivity via Bluetooth, USB, aux inputs, as well as through an SD card slot.  The interface is controlled via an 8-inch touch screen in the center console and a 5.7-inch screen in the instrument cluster.

Only time will tell if Cadillac has done enough with the ATS to entice buyers to look in American showrooms rather than the traditional German ones.  That being said, GM has been on a roll with new product lately and we’re very interested as long time German car owners to see where the ATS fits in.