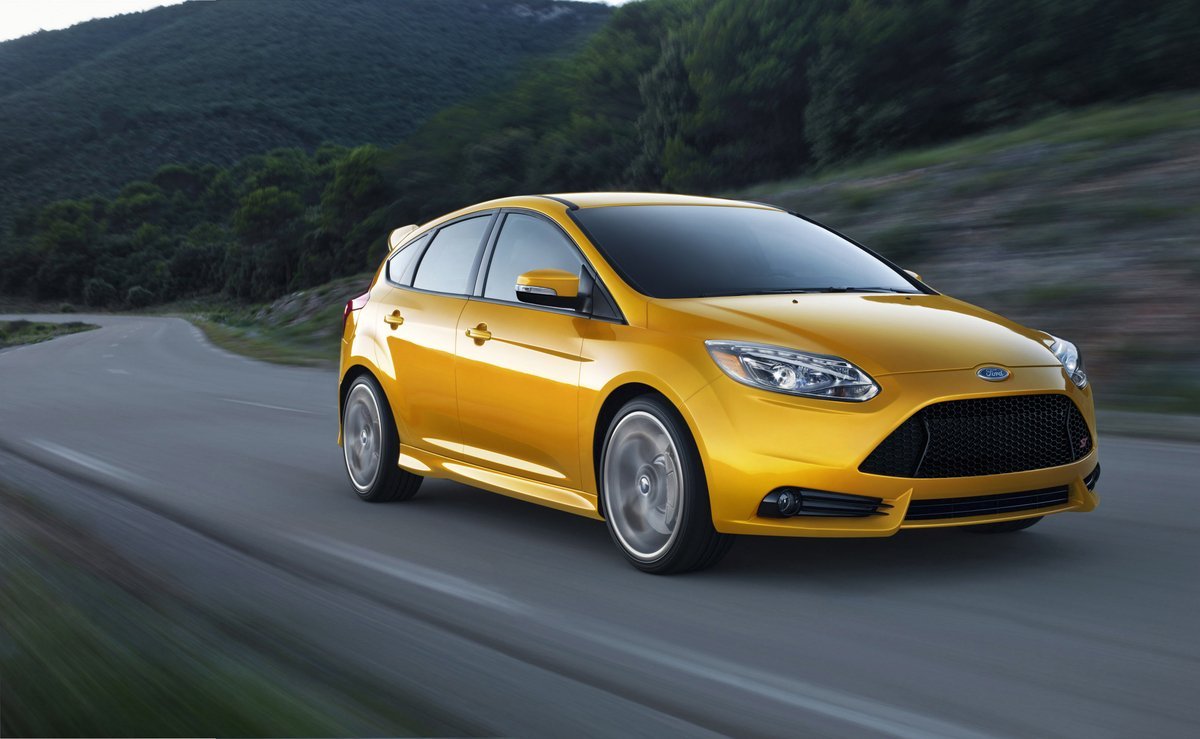 Many will point to Alan Mulally and the “mortgage years” as the period during which Ford initiated its product renaissance. In my opinion, it started years before that—1998, to be exact—with the debut of the Mk1 Focus. The replacement for the decent-but-not-great Escort, the Focus charmed the automotive press, offering sophistication and refinement that had previously been exclusive to more expensive compact offerings. Volkswagen, at the time still building Jettas and Golfs on a chassis featuring a twist-beam rear suspension, took notice too, and decided to hire away some Ford suspension engineers to help them develop the rear multi-link setup found on Mk5 and newer compact Vee-Dubs.

In the U.S., those who normally disparaged anything domestic went to great lengths to downplay the excellent compact’s European heritage. “Just another F.O.R.D.,” they’d say. “Yeah, it has a neat suspension. So does the Neon.”

The Focus’ image problem was further compounded by early reliability and durability issues. It wasn’t until the Mazda-based Duratec engines worked their way into the U.S. lineup in the early 2000s that the platform really hit its stride. If you need a fun, practical car that is cheap to fix and maintain, drop a few grand on a 2004-2006 Focus. Thank me later (and forget this recommendation entirely when you’re cursing its short-lived engine mounts. Hey, I never said it was perfect.).

Unfortunately, the U.S. market has seen an extremely limited sampling of the Focus’ high-performance variants. The SVT Focus made it to our shores, only to disappear with the 2005 refresh. In its place, we got an “ST” package that was nothing like the ST found in Europe. Ours was a 2.3L “big motor” Duratec with a suspension package based on that of the previous SVT car. Europe saw completely revised car (the “C1” evolution of the Focus platform which we got as the Mazda3) and their ST trim came with a turbocharged Volvo five-cylinder. The U.S. model got a more significant overhaul in 2008, marking the end of the 5-Door and wagon models entirely. In 2009, Europe got the 300hp RS with its torque-steer-mitigating “RevoKnuckle” suspension. Sensing a pattern?

When Ford announced that the 2012 Focus would be a world car, skepticism ran rampant among critics and fanboys alike. The Mk1 was a “world” car too, at first. But Ford delivered on their promises, and when they finally announced that even the ST would make it stateside, the general reaction was equal parts surprise and relief. 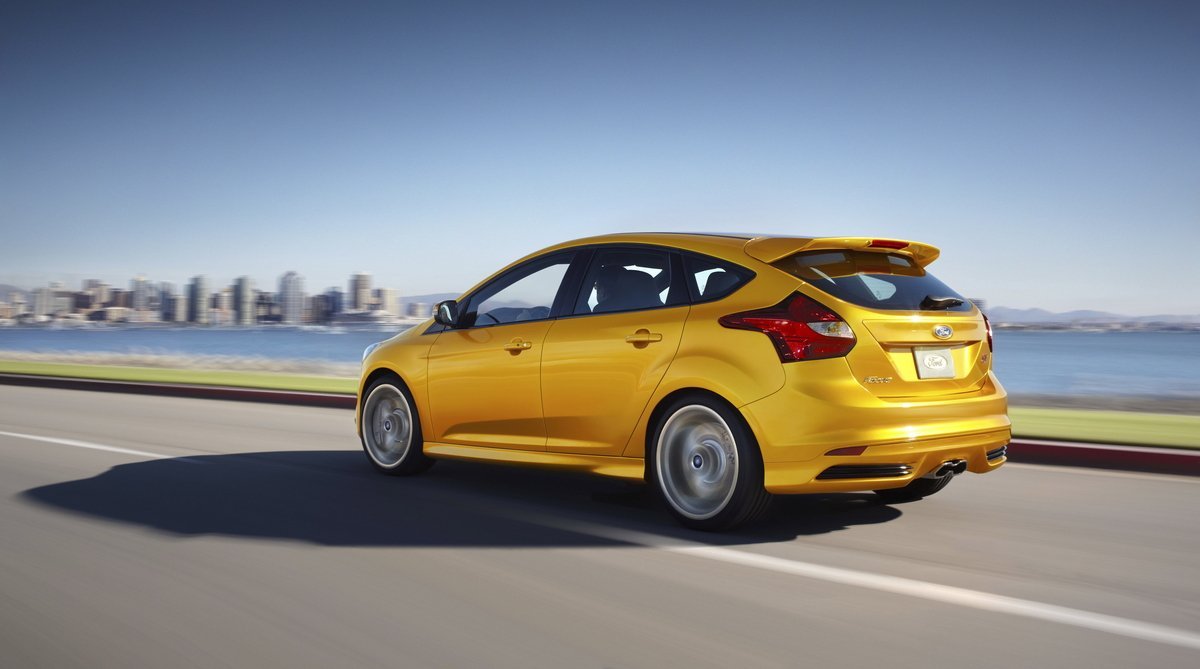 As much as the Focus ST evolved in its first two generations, the third represents the most significant revision yet. Gone are the Volvo-sourced, five-cylinder engine and the mechanical limited-slip differential. Like its tamer cousin, the ST gets electro-mechanical power steering and brake-based torque vectoring, both of which have been recalibrated to handle the output of the ST’s turbocharged four-cylinder (rated at 252 horsepower on 93 octane).

These changes put the ST smack in the middle of the current hot hatch crop. Its primary competitors are the Mazdaspeed3 and the VW GTI. The former bests the ST’s power output by a scant 11 ponies and features a mechanical limited-slip differential; the latter has the lowest curb weight of the bunch and, like the Ford, relies on the brakes to distribute power to the front wheels. It’s hard to say how much of a power advantage the Ford and Mazda have over the notoriously under-rated GTI. On paper, the gap between VW’s power claim (200) and the others’ appears significant. In reality, they’re probably only separated by 25 or 30 horses.

In refinement, the ST is closer to the GTI end of the spectrum. Yeah, the paint options tend toward flashy and the interior gets body-colored highlights, but the ride and composure are more Volkswagen than Mazda. The differences aren’t as significant as you might think, however. Remember, these cars have very similar suspensions, being that they all owe their basic rear suspension geometry to the same car. Naturally, the differences come down to tuning. The Volkswagen’s ride is suppler, the Mazda’s a bit over-sprung, and the ST’s splits the difference.

And it’s a happy medium. The ST has an almost-perfect ride/handling balance. There’s no getting around the sharper impacts transmitted by the 18” wheels and thin, aggressive tires (235/40R18 Goodyear summers—the widest OEM tire of the three), but the trade-offs are immense grip and incredibly sharp turn-in response. Electric-assist power steering numbs the wheel response just a tad, but not enough to leave you wondering (and at this point, everybody in the segment has moved over to EPS, even Mazda).

Unfortunately, the weather during our loan period was miserable and we found very little time to fully exploit the ST’s performance capabilities, but we made the best of what we had. It offers an excellent balance of compliance and playfulness. It’ll track straight and true on the highway without a single twitch, even when you need to squeeze off a tight pass, but with the nannies off, the ST will dance with the best of them. Heavy though the car may be, it never feels it. The back end comes around gamely, not violently, when you lift into a turn. This is a hot hatch to be respected, but not necessarily feared—playful, but ultimately tame. 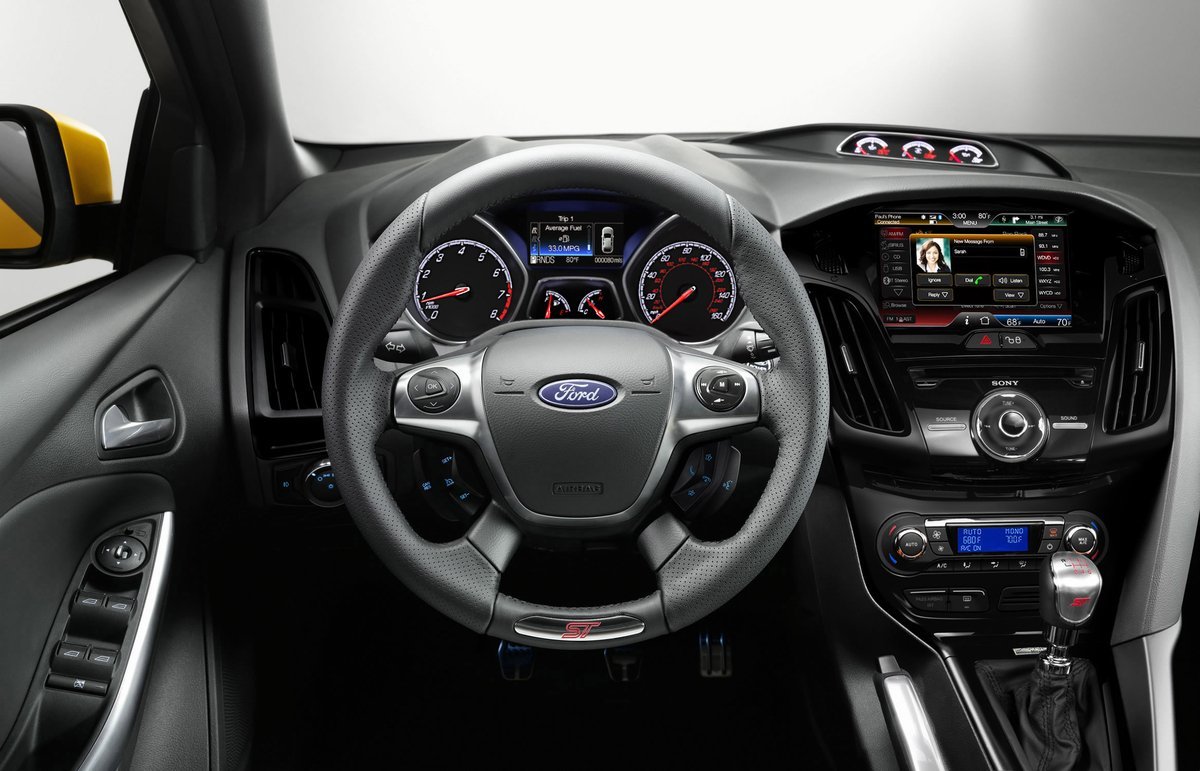 The EPS does more than just help you turn the wheel, however. It’s also designed to help mitigate the ST’s torque steer—inevitable on front-wheel drive cars making this kind of power. It’s hard to say whether the EPS programming works any better than Mazda’s layers of electronic aids. The ST still tugs despite the intervention, and will sneak off center under hard straight-line acceleration if there are significant differences in the surfaces under the drive wheels. It’s an imperfect solution, but it’s there to mitigate a problem that arises from pushing a great deal of power through a drive configuration that is itself imperfect. High horsepower and front-wheel drive will always be at odds with each other, and there’s only so much that can be done about that.

Fortunately, though, the ST has one redeeming quality that makes it shine above both of its big competitors, and that is its power delivery. The two-liter, turbocharged EcoBoost engine is excellent, and the transmission is geared perfectly to take advantage of its power band. The engine pulls hard to redline and there’s no aggressive boost limiter to get in the way of power delivery in the lower gears (Mazda), and no artificial torque barriers softening the midrange (Volkswagen). Everything is matched just about perfectly. My only complaint is that the Focus has been so refined for this generation that Ford had to use a noise pipe and butterfly valve contraption to let the engine noise in. There’s no synthesizer or anything like that; the engine noise is quite real, but that it has to be piped in just makes it seem more artificial. Volkswagen is equally guilty of this silliness. It’s not a deal-breaker by any means, but it’s one of those things that can’t be ignored once you notice it.

When the valve closes and the engine noise fades to the background, the ST’s cabin is quiet well-appointed. Physical comfort, however, is a bit trickier. I’ve sung the praises of Ford’s new Recaros previously, but these are narrower and firmer than those in the Mustang. Zerin, shorter and far leaner than I, found them tricky to climb into, but comfortable and supportive. At 5’9” and ~200lbs, I felt that I fit in them just fine, but I couldn’t drive the ST for long periods without developing lower back pain—a sensation I’ve never experienced in any other car, no matter how aggressively bolstered the seats. But man, do they look sharp. The good news for others who might feel similar discomfort is that the base model comes with non-Recaro sport seats, so you’re not forced to buy them if you can live without the options on the higher-trim cars. 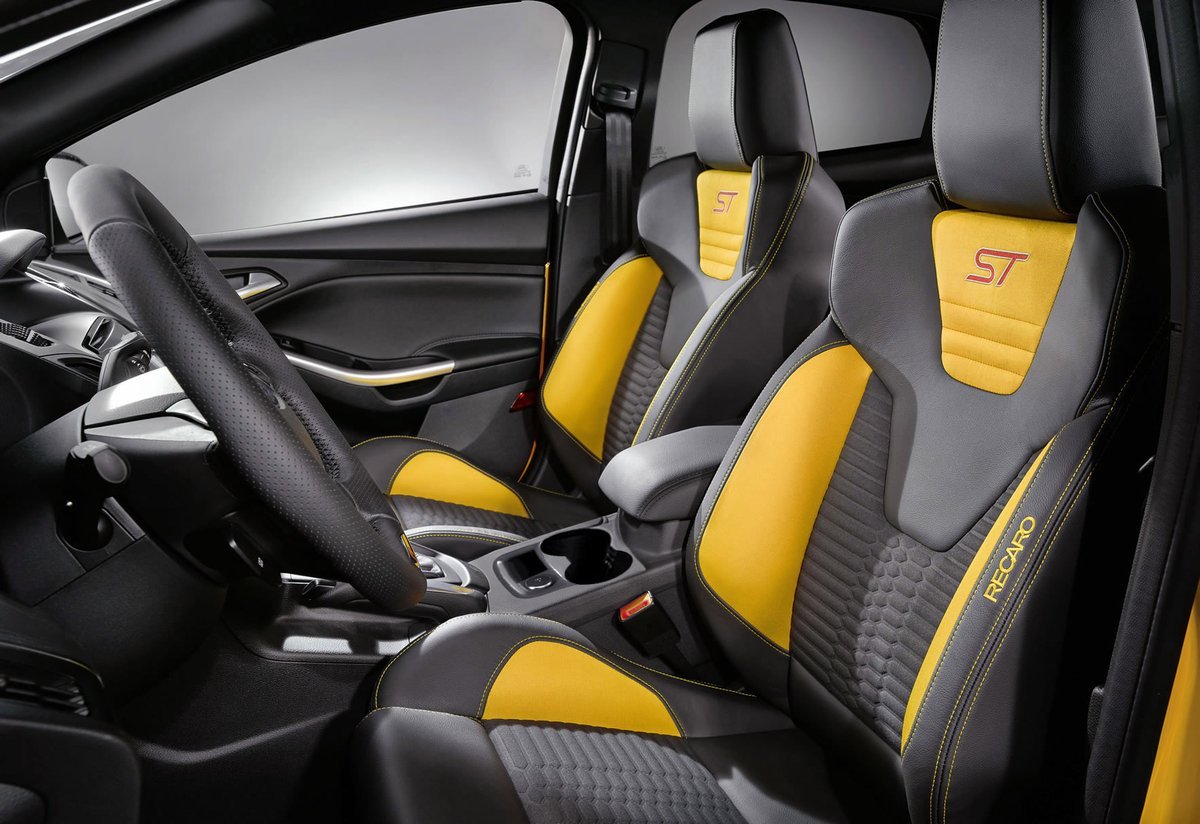 The rest of the interior is pure Focus. Our loaner was equipped with the mid-trim (201A) package, which includes the aforementioned partial-leather Recaro seats MyFord touch with Sony audio, and some other small touches (60/40 split rear seat, etc.). Our tester also had touchscreen Nav, which can be purchased as a stand-alone option for $795 or as part of the up-trim package which bundles it with the full-leather Recaro seat upgrade. At just under $28,000, this combination undercuts a Driver’s Edition GTI with the “Topsport” seats.

If you’re planning on track work, the partial leather Recaros will save you money and weight. The full-leather seats offer a more understated look if you just want a quick DD with sexy seats, but they don’t offer any performance benefit over the hybrids. When it comes to tech options, I can only offer this advice: Try before you buy, and leave the dealer with what suits you. You’ll either get along with MyFord Touch or you won’t.

What Ford has here is a car that matches the Mazdaspeed3’s straight-line punch and the GTI’s day-to-day practicality and comfort. The dedicated track junky may balk at the absence of a mechanical LSD, but it’s not a complete deal-breaker for the average buyer, who may be more put off by the fact that Ford didn’t see fit to offer an automatic.

More for you and me.

Ford provided the ST for review.