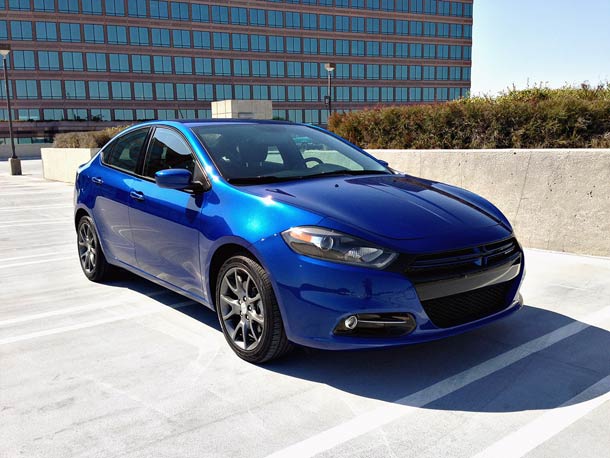 Dodge’s Dart takes a rare position in the small car marketplace in which it plays – it seeks to win its customer’s hearts rather than their minds. It’d be easy for your head to dismiss the Dart based purely on its on-paper specs – particularly the trim level we’re driving, which is saddled with the smallest-displacement engine in its class (1.4L) and the highest curb weight – nearly 3,300 pounds on our tester. Hardly the combination car guy dreams are made of. Although Dodge couldn’t return the bundle parent company Fiat left on their doorstep – the chassis and turbo powertrain are hand-me-downs from the Alfa Giulietta–they decided to imbue the Dart with enough personality to overcome its spec sheet deficiencies instead. 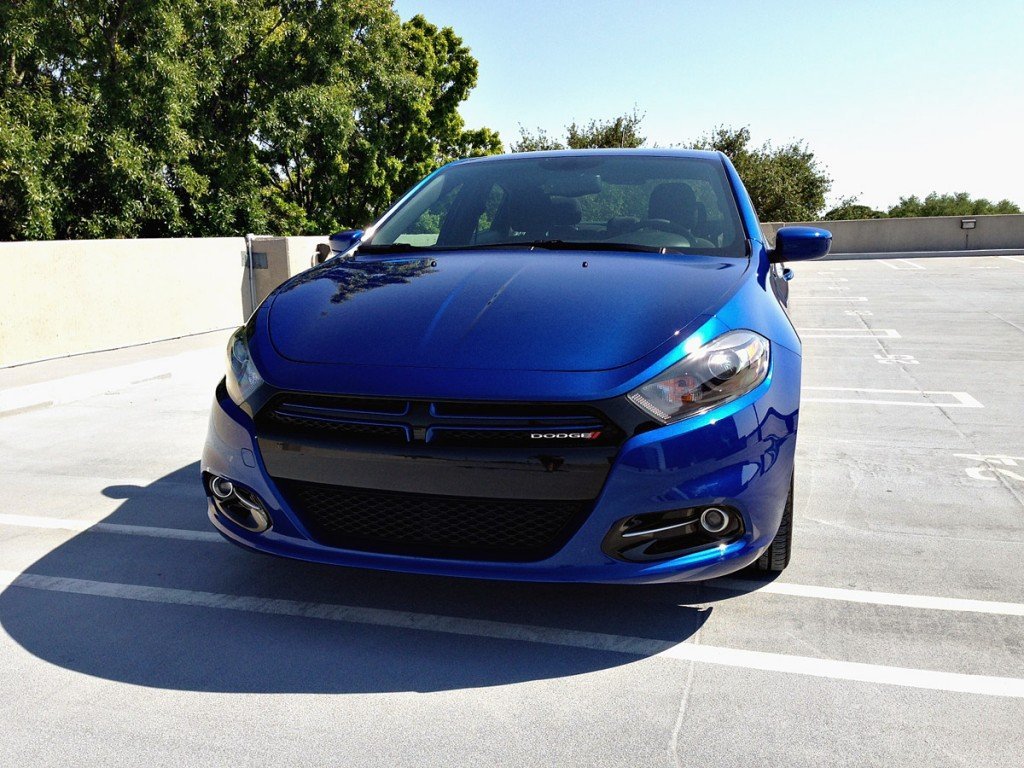 That personality makes itself known the moment you toggle the optional remote start key fob. Walking around the Dart’s rump, the rorty exhaust bark greeting pedestrians bears more than a passing resemblance to the Fiat 500 Abarth that shares its turbocharged engine with the Dodge. Once the idle settles, a faint spooling from the pint-sized pressurizer under the hood leaves no question as to the method of the Dart’s aspiration – it sounds as if Dodge’s engineers decided to fit an external turbo wastegate and then not recirculate it. They also saved the few keen customers so inclined a trip to the exhaust shop, much like the SRT-4 variation of the Neon did years ago.

The Dart makes a good curbside impression. Sharp body creases, a rising beltline, cross-hair grille and dark graphite aluminum wheels spice up what could otherwise be another vanilla compact sedan. The long LED light bar stretching across the back end doesn’t hurt, drawing visual comparisons to the bad-boy Charger. Inside, things really get bold. A buttonless 8.4” panel dominates the upper half of the dashboard on our test car, comprising the stereo, navigation, climate and vehicle setup controls. Dodge brands its touch screen system as Uconnect, and this high-feature version used in the Dart is among the best this author has ever used, in any car at any price. Damning with faint praise, you say? Doubt away – I was in the skeptic camp, too. After all, what’s the point of these often frustratingly complex systems that demand more of a driver’s attention than a simple array of buttons would? 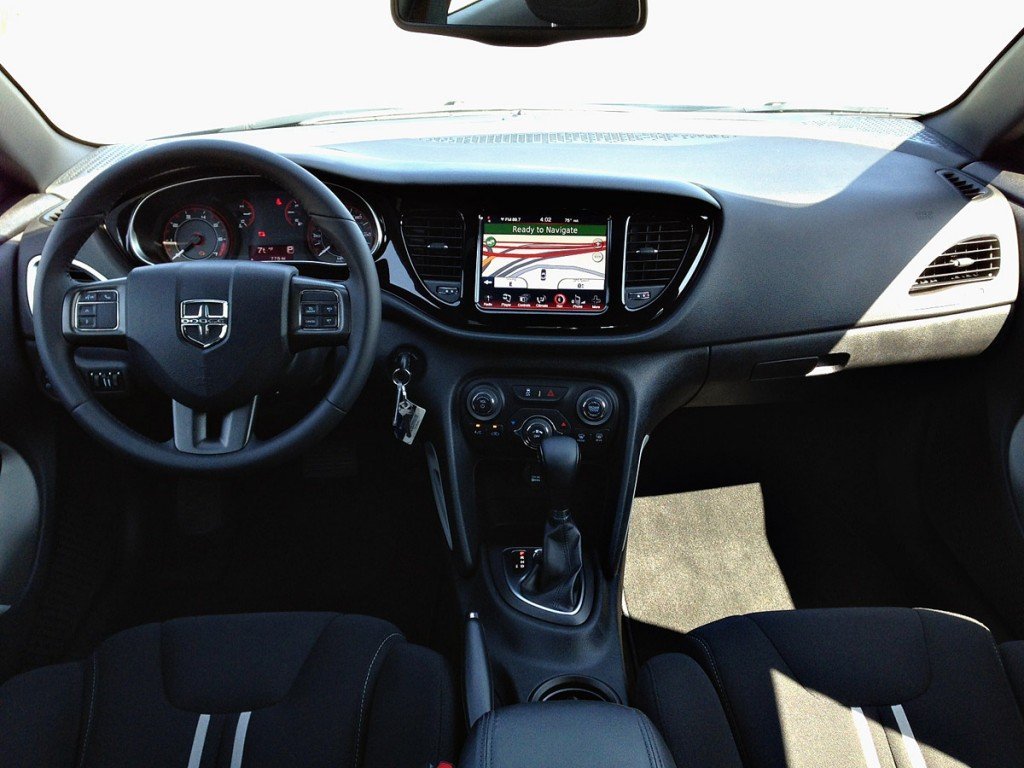 The fact of the matter is, new car buyers demand modern features, and the only hope of housing those features in a rational manner is to develop tablet-like systems that replace hard buttons with reconfigurable displays capable of performing a myriad of functions. Chrysler’s new system stands head and shoulders against the other players in this segment, let alone some of those further up the automotive food chain. One such system that starts with a C and ends with a –you shall remain unnamed. The rest of the interior confirms the suspicion that the Dodge team put serious thought into the Dart’s design. Everything is rationally laid out and honestly assembled, and while the materials might not approach Audi levels of opulence, there’s enough soft touch plastic and leather coverings to keep from offending.

The Dart’s on-road demeanor maintains the rest of its “big car” rouse. The ride and handling tradeoff is extremely well-judged. No fake sportiness or cheap car crashing over bumps. Just unruffled composure, flat cornering and precise steering. There isn’t much in the way of feedback or entertainment value, but until Dodge tries to slap an R/T (or SRT) badge on it, we’ll give them a pass.

Things are sounding pretty positive so far, but I’d be remiss if I didn’t mention the Dart’s one true shortcoming, and it’s a kind of a biggie: the powertrain. As previously noted, the lump under our tester’s hood is the Fiat-sourced turbocharged 1.4L four-cylinder, in this instance paired with a six-speed dual dry clutch transmission. Said four-cylinder gives a rousing performance in the 500 Abarth, delivering 0-60 times in the high 6s. Saddling a car with an extra 800 pounds tends to be detrimental to acceleration though, and nowhere is this better exhibited than in the Dart. With only 1.4 liters of displacement to motivate this mill’s turbocharger, lag is shall we say “noticeable”. And even with six gears in its arsenal, the dual-clutch auto can’t keep the engine in the meat of its powerband, which really only starts around 2700 rpm, during the times you really need it. Stepping off from a traffic light or pulling out to pass become tests of bravery. The only solution is to mash the accelerator, totally defeating any fuel-saving benefit that ticking the option box for the 1.4L might have netted in the first place. From its EPA estimates of 27 city and 37 highway, we averaged around 26 mpg – hardly atrocious, but certainly below what would be possible with a lighter platform or better gearing. 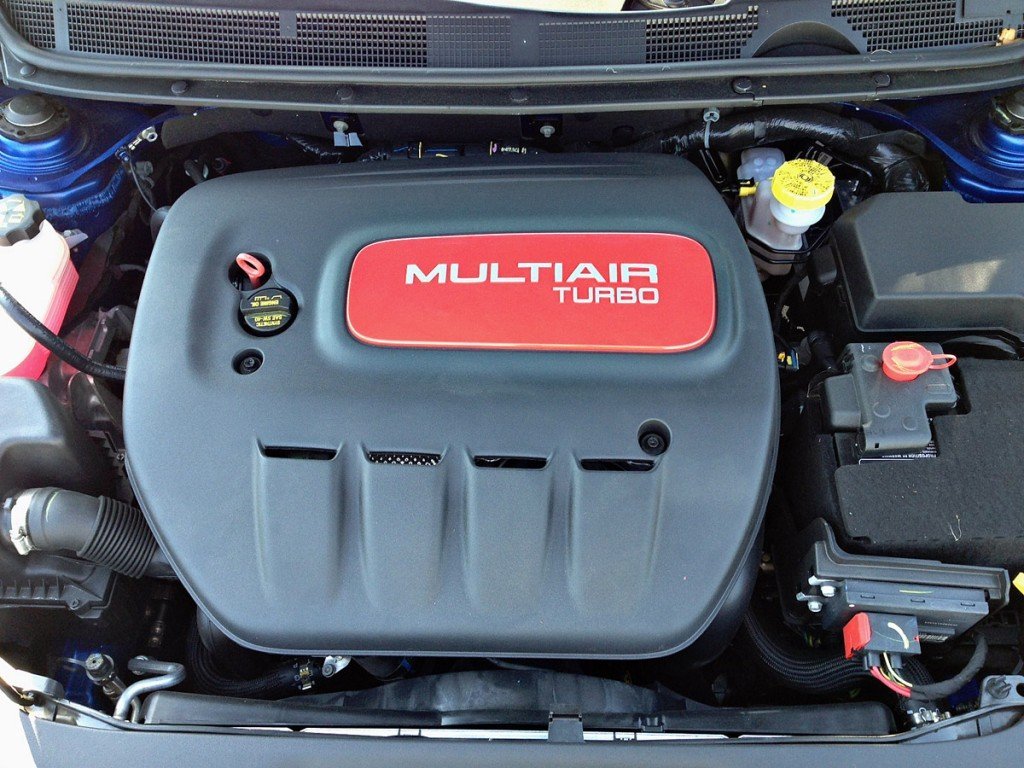 There’s hope on the horizon for the turbocharged version of the Dart, though, and it comes in the form of a 9-speed automatic transmission. Chrysler CEO Sergio Marchionne has said publicly that he wishes it was available in the Dart from the get-go, but as of this writing exact timing for the 9-speed to land in the Dart hasn’t been nailed down. Rest assured, with Dart sales starting to pick up and many reviews of the 1.4T/DCCT echoing similar sentiments about its laggy performance, we should see a 9-speed Dart on the market sooner rather than later. Until then, I’d recommend skipping the 1.4L turbo setup for either the 2.0-liter base or 2.4-liter optional Tigershark engines, both of which can be optioned with six-speed manuals (also available with the 1.4L turbo engine) or conventional 6-speed torque converter automatics.

That’s a good thing, because aside from its turbo powertrain deficiencies, the Dart is a standout in the compact arena – a car “right-sized” enough to provide a happy medium for a small family or couple, yet with enough style and feature content to appease even midsize shoppers. 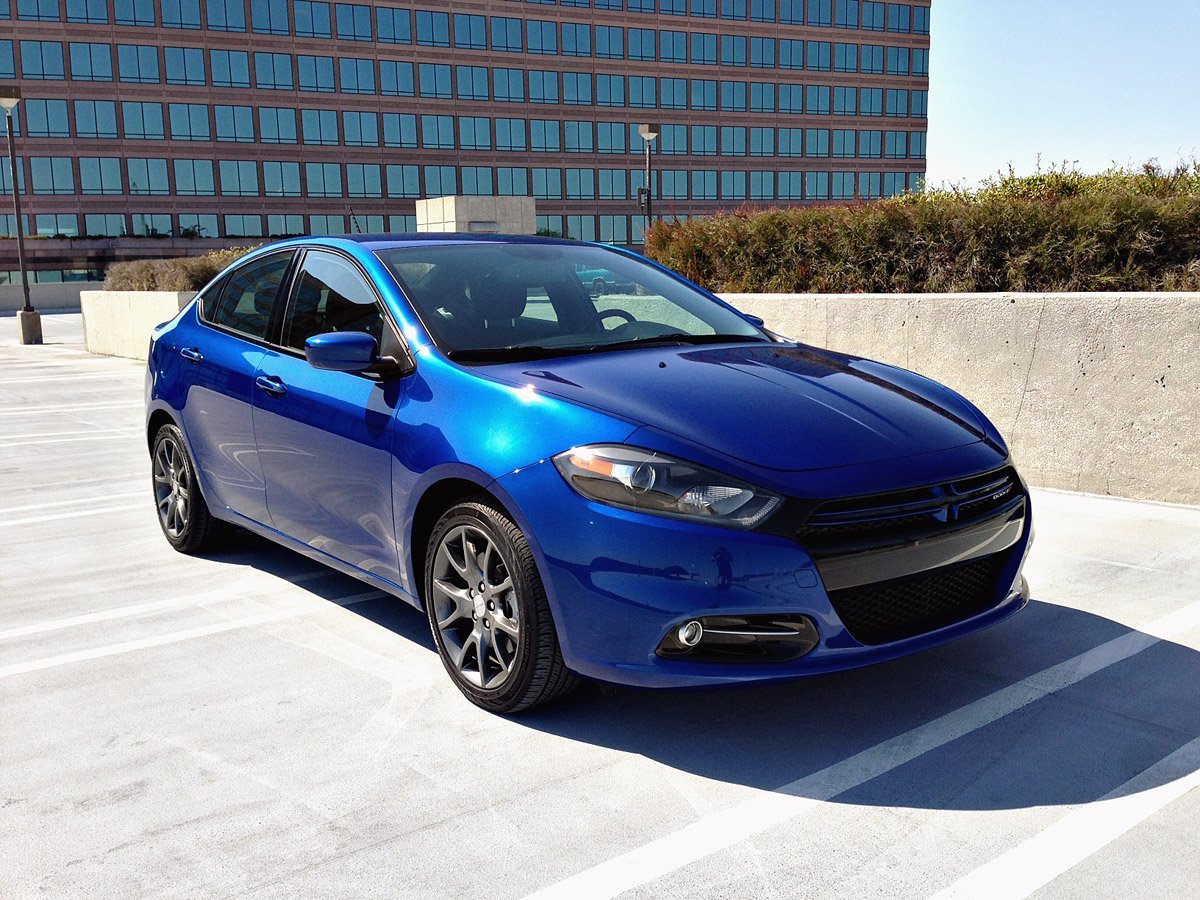 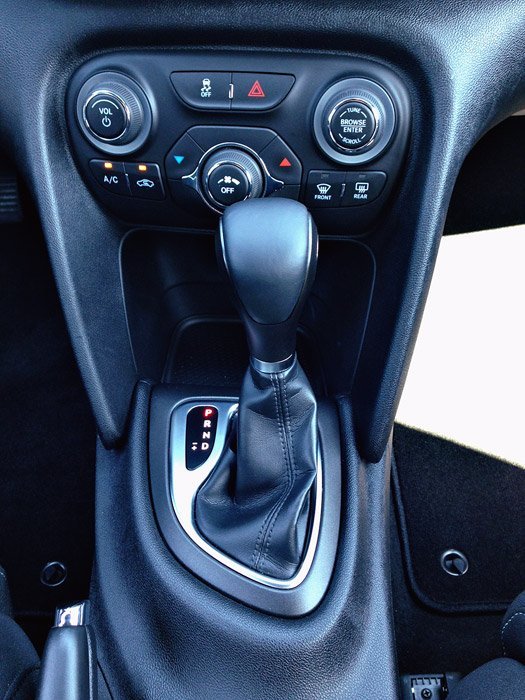 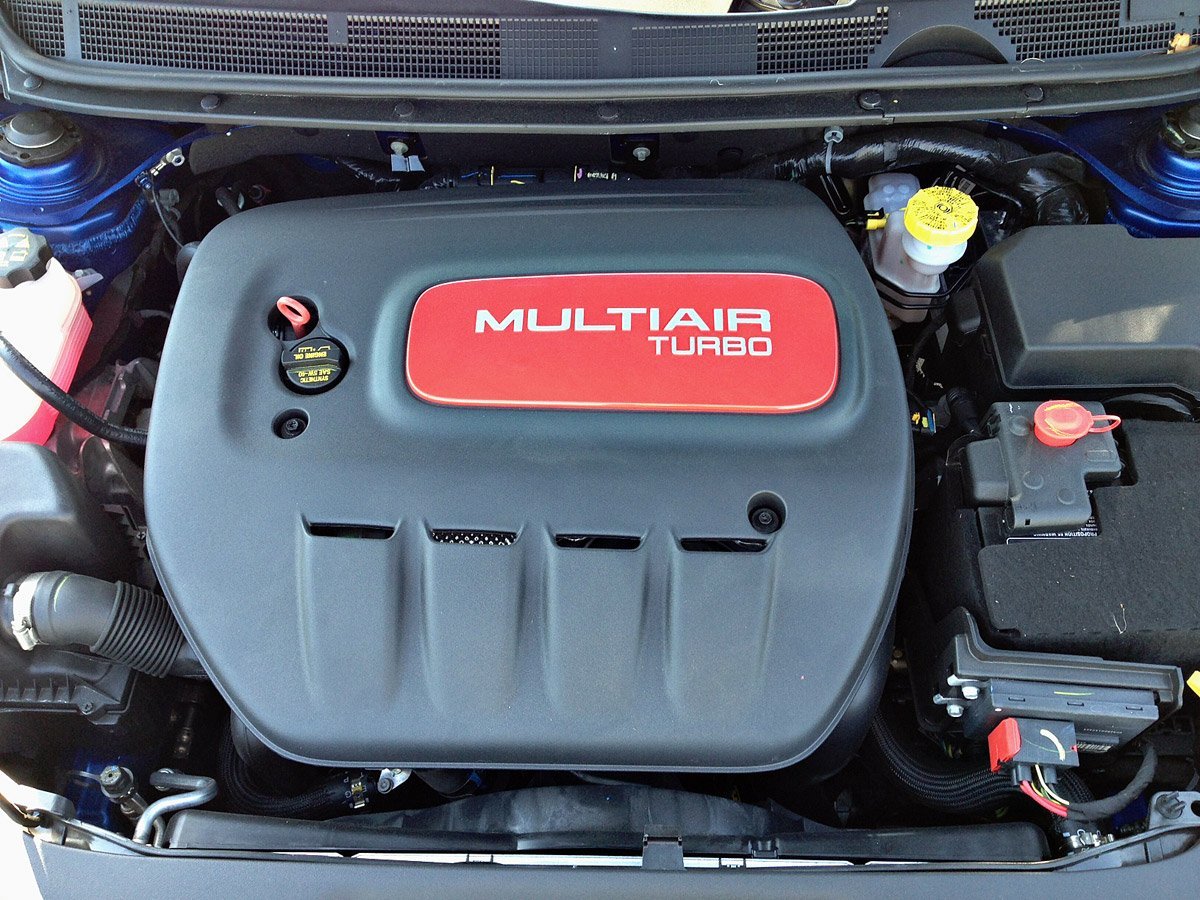 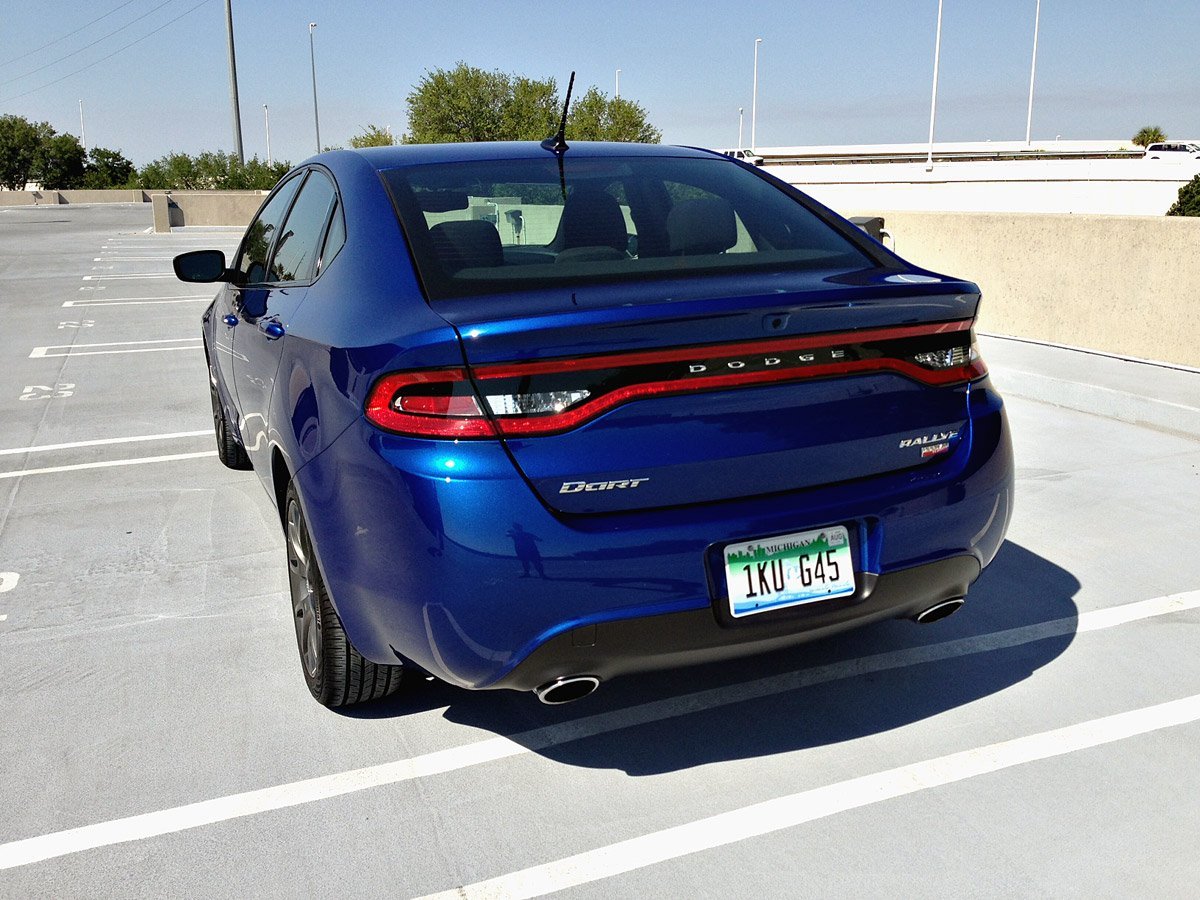 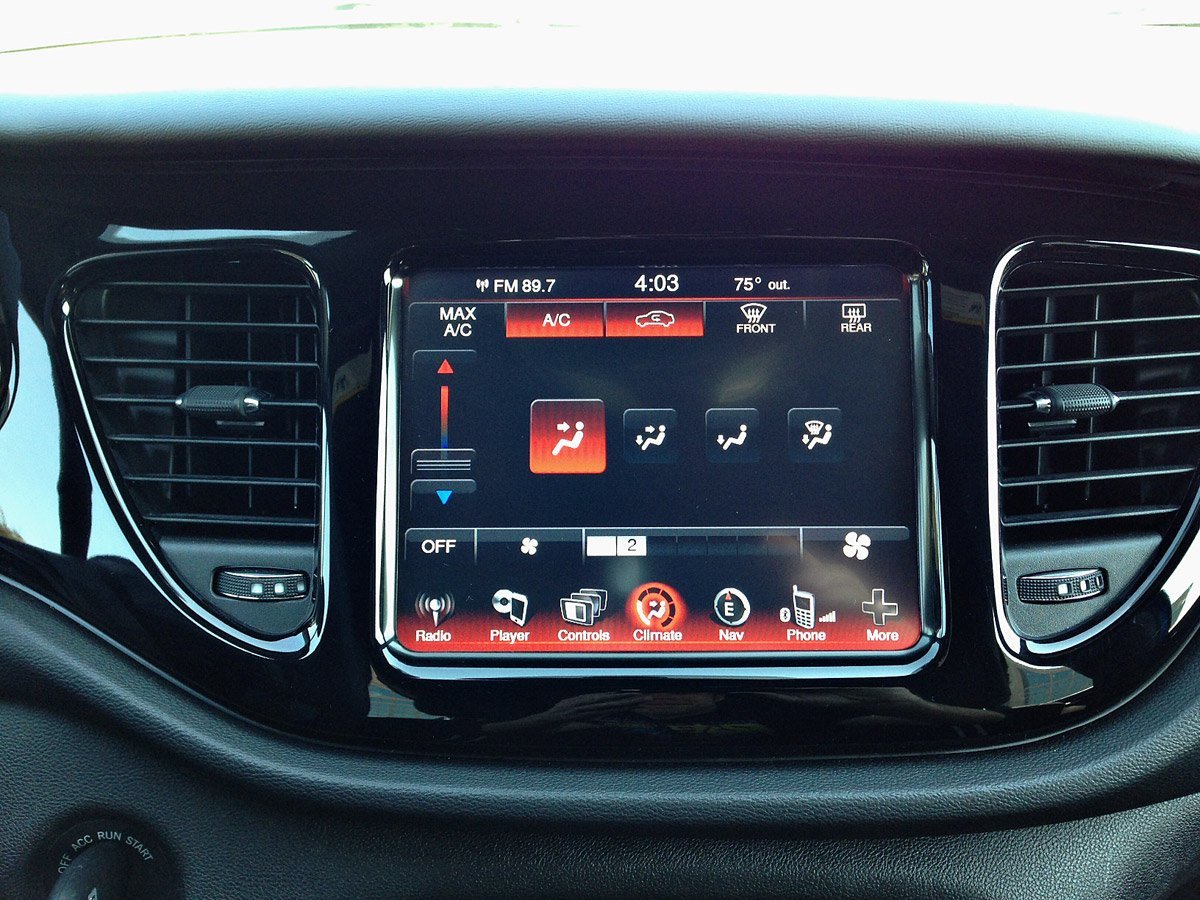 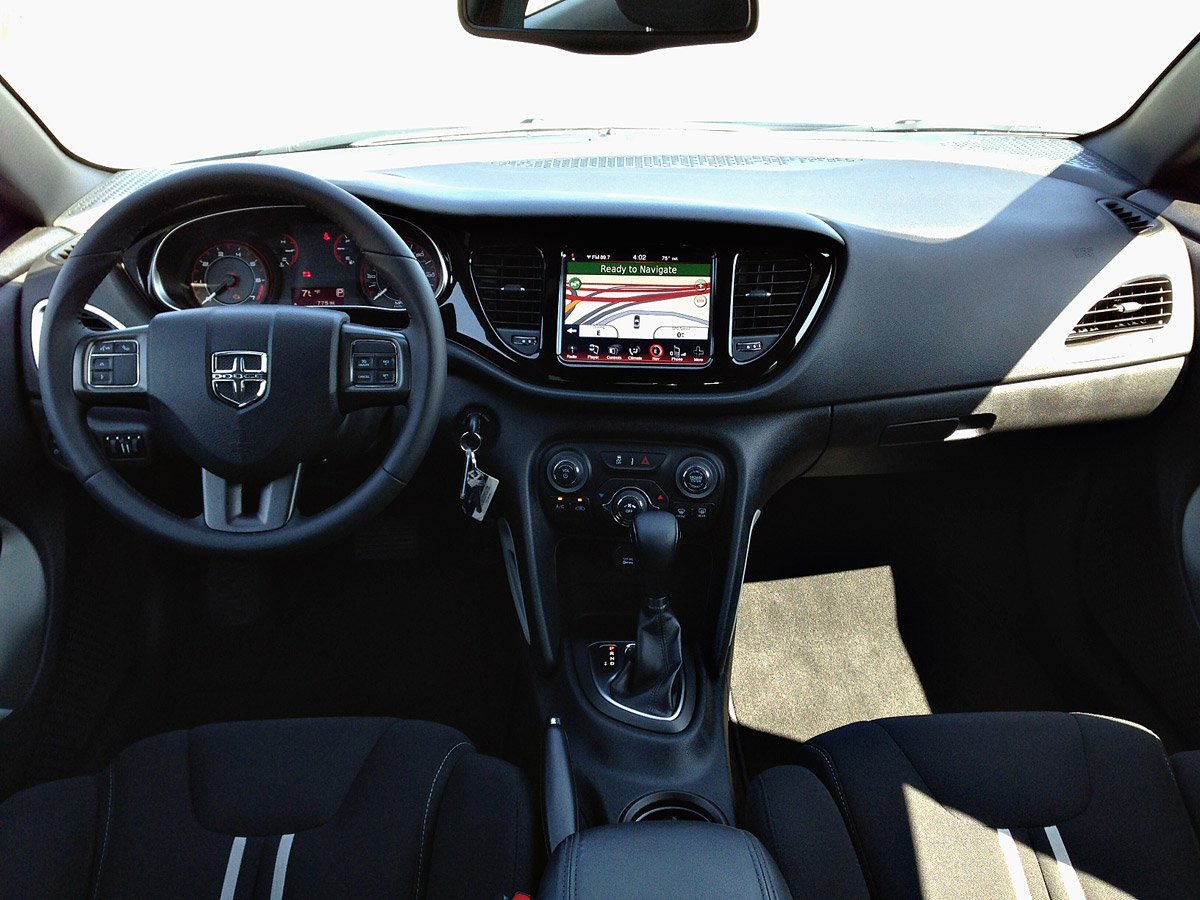 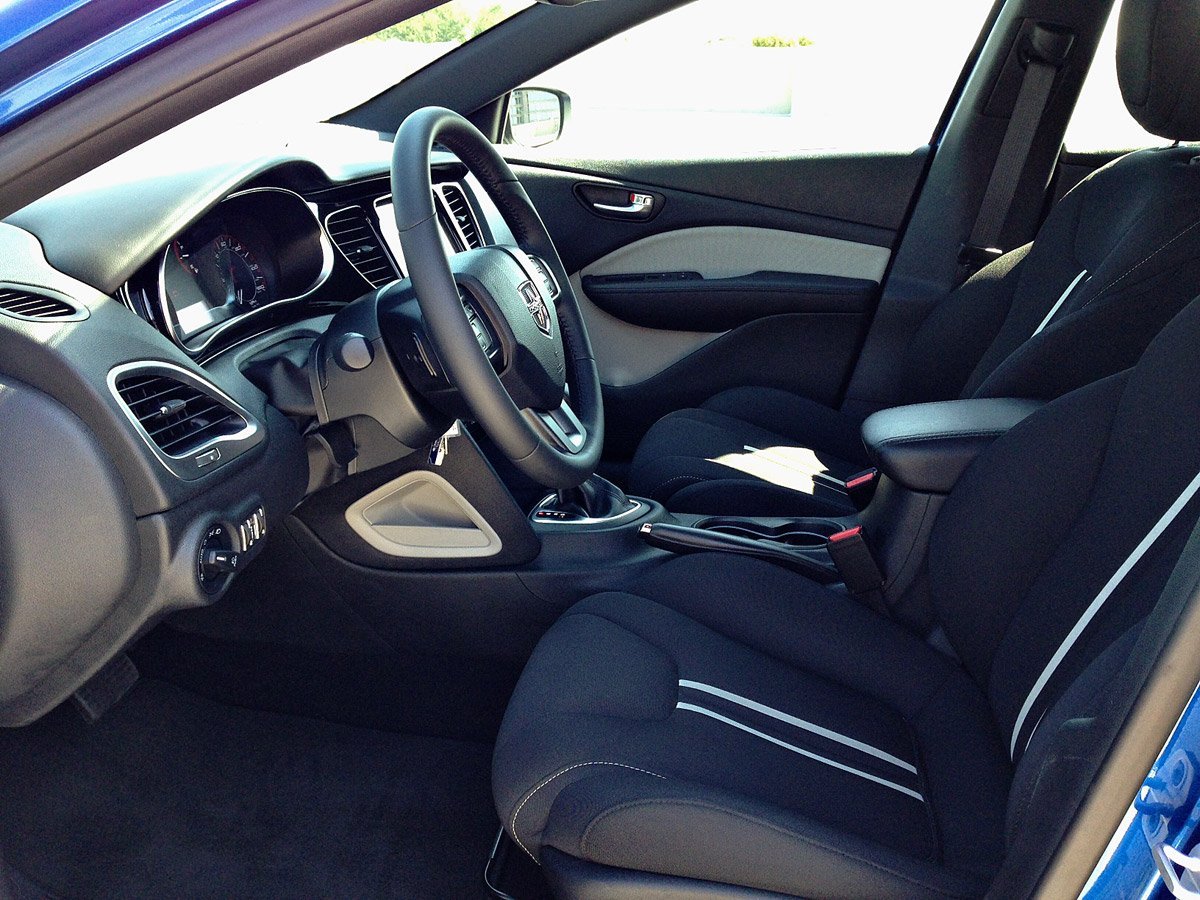 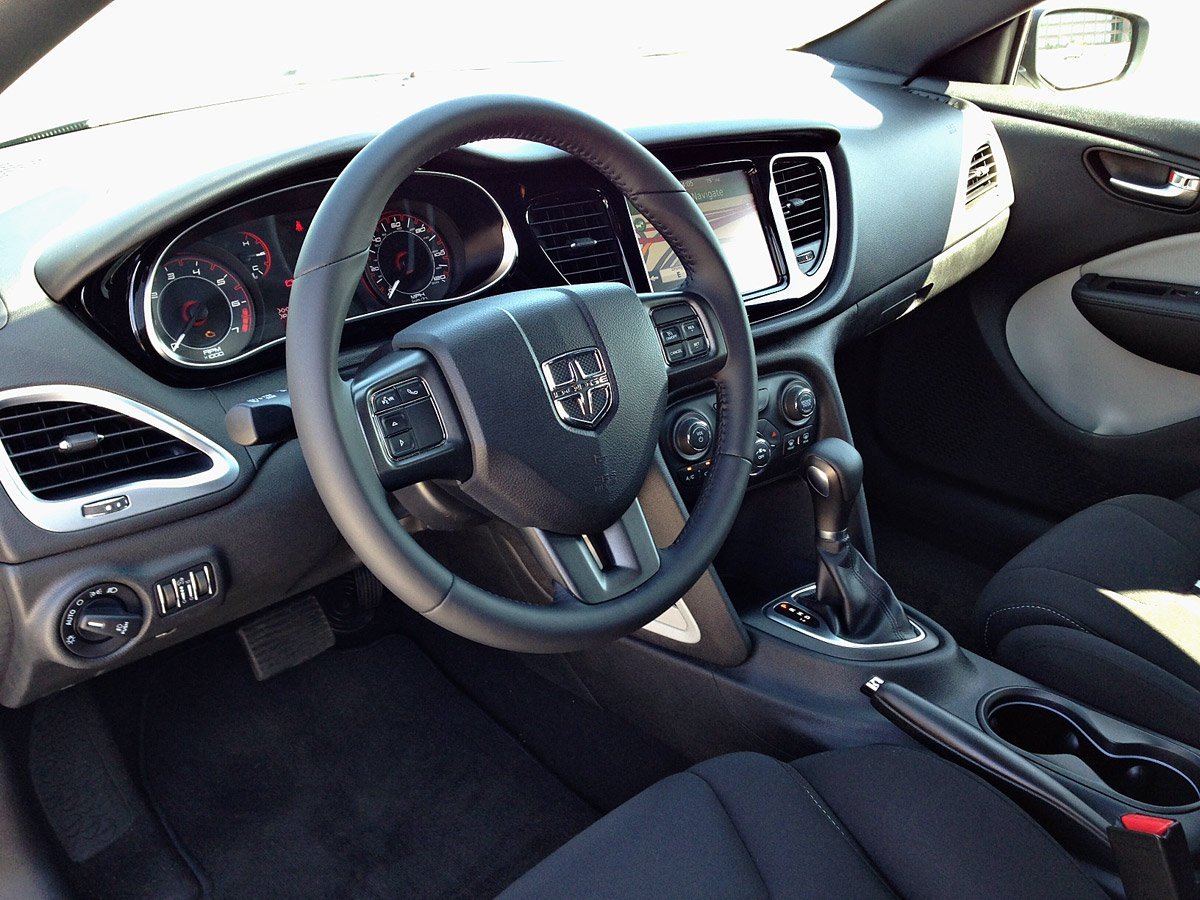 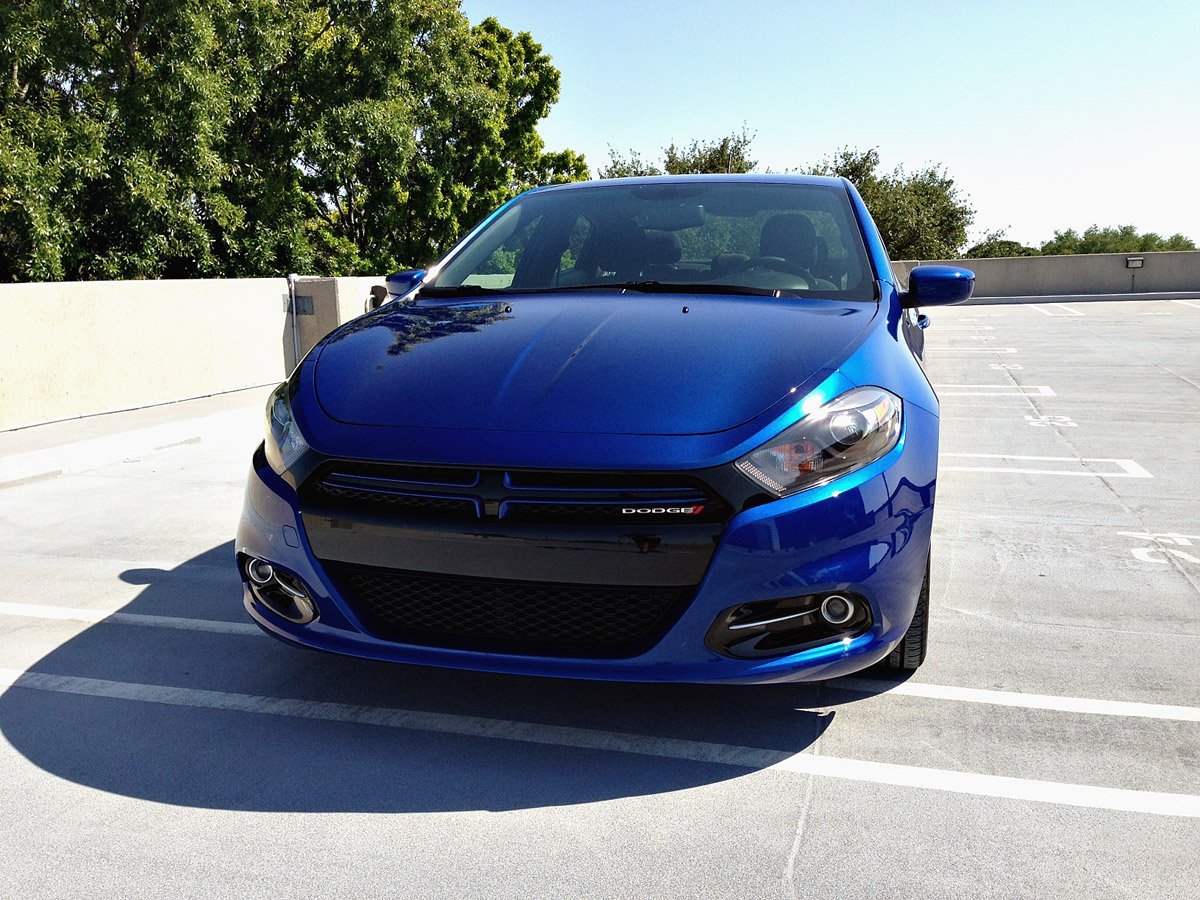 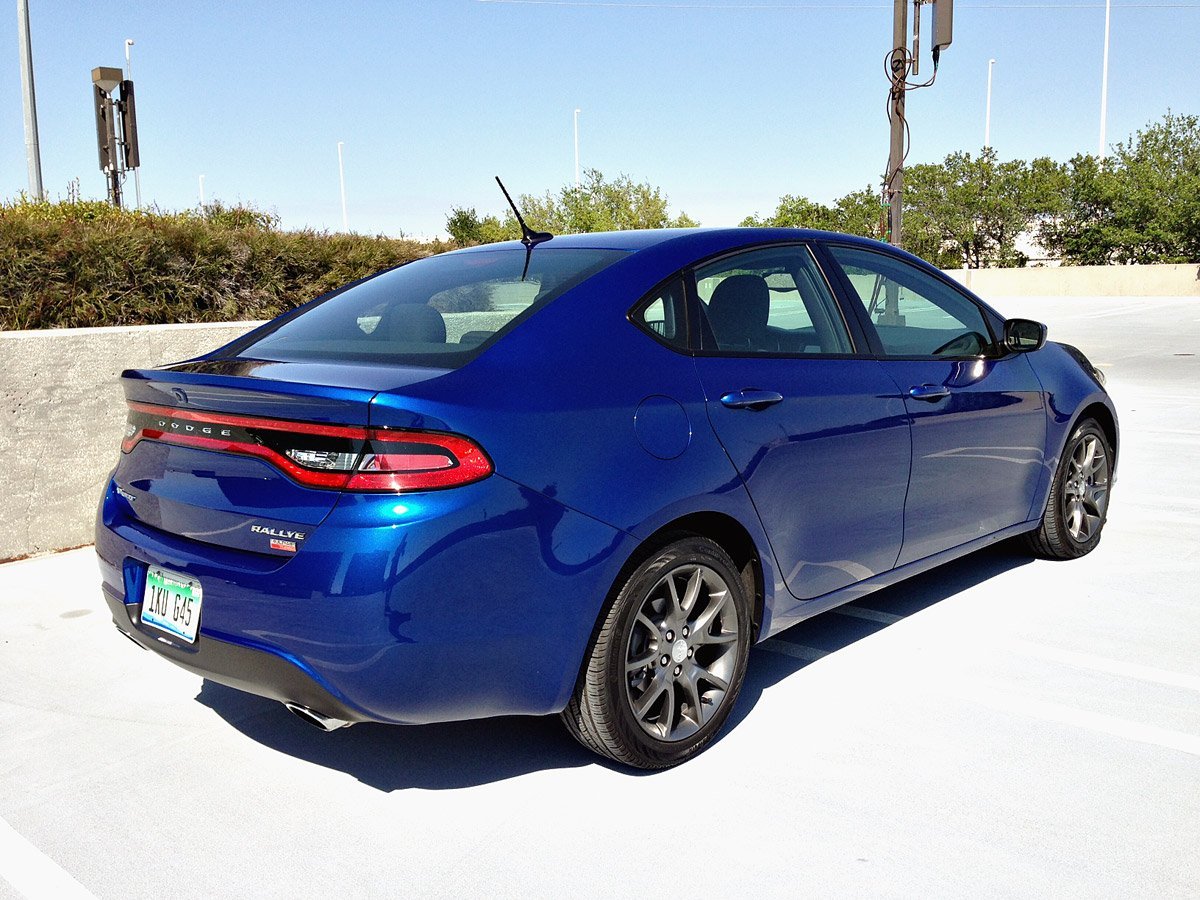